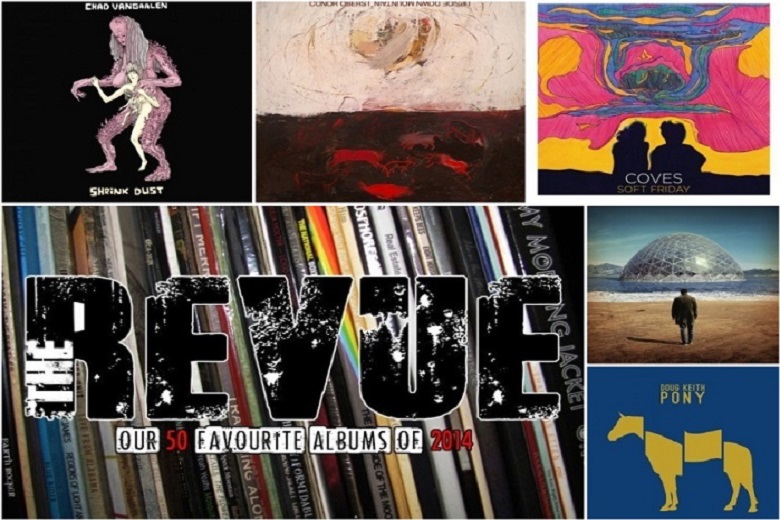 Yesterday, we listed our first five favourite albums, and we continue albums 6 to 10. Just as a reminder, the list isn’t in order of what we think is the “best album” of the year, but rather just listed in alphabetical order.

Calgary’s Chad VanGaalen is probably one of the most unassuming yet influential individuals in Canadian music. While he’s not a big user of social media and he doesn’t get much publicity for his extracurricular activities, his work gets noticed either as a singer-songwriter or producer (for instance, he produced Toronto’s Alvvays’ terrific debut album, which was on one of our favourite albums of 2014 and listed yesterday). With Shrink Dust, VanGaalen once again demonstrates his songwriting and storytelling mastery. It’s a psychedelic folk album of imaginative and otherwordly stories; an album that is part fantasy, part reality and every bit brilliant.

Although only 34 years old, Conor Oberst has already reached indie-rock legend status thanks to two decades of fantastic albums primary released under the Bright Eyes moniker. On Upside Down Mountain, Oberst sheds the Brights Eyes name and creates some of his best material in years, further demonstrating why he is one of our generation’s most gifted storytellers. Specifically, the album has a timeless yet relevant feel thanks to Oberst’s beautifully composition and mature songwriting that perfectly balances folk, alternative country and indie rock.

Coves released a lovely debut album titled Soft Friday this year. It’s an album that went under the radar this year, but for us, Soft Friday captured our attention after just a single listen. It’s a completely engrossing, dreamy album that immerses the listener in John Ridgard and Rebekah (Beck) Woods’ world with its psychedelic undertones and arousing melodies. Several months later, it’s an album that can be listened to over and over again and never feel old.

DAMIEN JURADO, “BROTHERS AND SISTERS OF THE ETERNAL SON”

Whereas Chad VanGaalen took us on a fantasy trip, Seattle’s Damien Jurado took us on a spiritual journey. Like VanGaalen, Jurado has been long recognized for his songwriting and producing skills (he produced Shelby Earl’s terrific Swift Arrows). With Brothers and Sisters of the Eternal Son – a pensive, haunting, and enthralling album – Jurado may have written his masterpiece. For us, Jurado is music’s answer to Salvador Dali – an artist who may perplex people at times but one that is provocative and keeps us coming back for more.

Singer-songwriter Doug Keith has somehow flown under the radar for years. For Pony, Keith assembled an incredible cast of musicians, including J. Mascis, Brad and Phil Cook of Megafaun, Adam Ganduciel of The War On Drugs, and fellow Sharon Van Etten band members Heather Woods Broderick and Zeke Hutchins. A lot of attention is brought to J. Mascis’ epic solo on “Pure Gold in the 70s”, but the rest of the album is just as good. “I Will Burn For You”, “Black Metal Black”, and “You Can’t Stand To Be Alone” all help make a case for Pony being one of the most criminally underrated records of 2014.