We shared a lovely track back in February on our Weekend Showcase from Inner Outlaws titled “Just Like Moonlight”. The Brooklyn based indie band is actually writing, recording and releasing a single every month during the course of 2015. They have a brand new track for April titled “Suzanna” which is an awesome lyrical gem and we also asked them a few questions behind their single a month motivation and what else is in store for the diverse quintet.

So what was your motivation for releasing a single each month this year vs. an EP or album all at once?

We recorded our debut album I/O over a week and a half last February, but that just wasn’t an option this year. The entire process was emotionally draining–for a lot of reasons–and then the album just didn’t reach as many people as we had hoped.

Focusing on singles seemed much smarter after that experience. People have definitely been responding well so far. But it’s also been a fun creative challenge for ourselves as musicians, forcing us to experiment with sounds and push our songs in different directions.

Also–money of course. Albums are expensive!
Since you have limited time to write and record – is the creative process different or just truncated?

The baseline is the same, but it’s much more unpredictable. Each track has to work as a standalone single, so we spend a lot of time layering and fine-tuning arrangements. This month’s song is a good example: we were so unhappy with the first version that we tore everything down and rebuilt from the ground up. That happened with the first two tracks too, but to a much lesser extent.

How did Inner Outlaws come about? Was the band always envisioned with two vocalists, or did it just happen that way?

Duke, Ian, and Jake played in a band called Spaces a few years back. After Spaces broke up, Michael started playing bass and that’s about when Inner Outlaws was formed. Emily has been singing with us since just before we recorded I/O, but the dual singer dynamic has always been a part of our sound.
Is everyone from the Brooklyn area or are there a few transplants?

Actually, most of us are from Florida–Jake and Duke were in their first band together. Emily comes by way of Colorado.

How cool is it having your own home recording studio?

We don’t actually live there, but it’s pretty amazing. Our studio is in a leaky old basement we share with some friends–Jake actually plays in a band called Weird Teeth with a few of them. But it’s never not cool and this entire project would be impossible without it.
Could there be a possible tour in 2016 after recording a song each month this year?

All fifty of our fingers are crossed.

You can purchase the Suzanna single or actually all of their previous material on Bandcamp. Their I/O release from last fall is pretty awesome. If you dig Inner Outlaws, go like and follow them on all their social media outlets and tell a friend.

Here is their monthly March single titled “The Mark” and our favorite from their I/O release – “Rich City”. 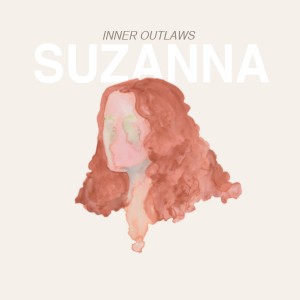