At first listen and initial glance of sibling duo Chenot and David Keith, the immediate assumption is that they would be based out of Berlin, maybe Stockholm, or even Copenhagen, where electronic, new wave, and synth- and electro-pop have surged in popularity and many artists are experimenting with a range of sounds to expand these genres. However, the Keiths – otherwise known as Mission Zero – are from New Haven, Connecticut, and they’ve just released their third album overall (second EP) last week.

People in Glass Yachts showcases the multiple talents of the siblings. Specifically, the album sounds like the duo are supported by a full band, but on the contrary the two perform all the instruments. Chenot takes on the duties of lead vocals while also playing the piano, synths, and guitar. David plays the drums, djembe, and bass and is responsible for the electronic beats.

The EP also demonstrates the dynamic and diversity of the brother-sister project. They don’t create just mind-blowing, electronic-driven synth-pop, but instead they’ve written tracks that span different fields of pop music. “What Do I Say” is a breezy, summer-time, surf-pop track. “Lotus” recalls the calm, laid-back pop of the early ’80s. “Be Right Here” is a surprising piano ballad that could be written three, four, and even five decades ago, and it brings back memories of Diahann Carroll. “Miles from Shore” is laced with a number of genres, including acid jazz and Afrobeat. It’s an interesting track that has a tribal, electronic feel.

There are only two tracks on the album that could be considered anything close to the typical synth-pop. The opening song, “Scattered on the Beach”, is a slow burning, stuttering number that is at times ethereal. “Past Immaterial” mixes Phantogram-style synths and beats underneath the pop melodies of Chenot. It ebbs and flows from pop arrangements to darker, garage-style beats.

People in Glass Yachts is not your typical, run-of-the-mill synth-pop album. It’s actually a challenging listen given the variety of music and sounds heard on the album. In some ways, the album feels like an experiment by the siblings, attempting to find the right combinations. More often than not, they succeed. However, if there is one complaint, a consequence of the experimentation is that the album doesn’t feel cohesive from start to end. Instead, the album is more of a compilation of songs that displays the wild and creative imagination of the Keiths, which should be applauded.

People in Glass Yachts is available on Bandcamp, iTunes, Amazon, and eMusic. 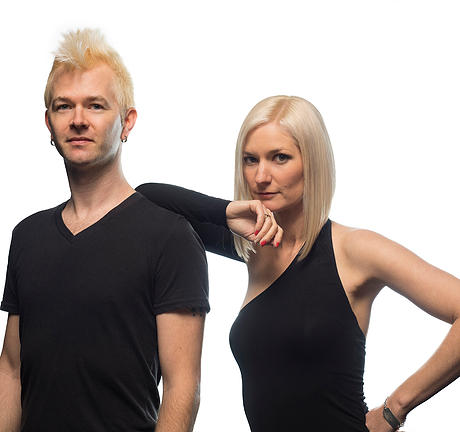