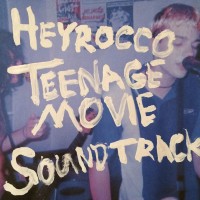 While Nathan Merli (guitar, vocals), Tanner Cooper (drums), and Chris Cool (bass) are no longer in high school, the album is a compilation of songs that can best be described as “teenage angst”, speaking out against popularity and the loser mentality that prevails within so many youth. This is evident from the start with “Loser Denial”, which feels as if Heyrocco are releasing their pent-up frustrations against the establishment. “Virgin”, which has a Nirvana feel musically, especially during the chorus, is another track that is one big middle finger against everyone trying to act cool and hip in the high school hallways.

There are also some extremely amusing moments across the album, which demonstrates Heyrocco’s self-deprecating methods. On “Melt”, a song about screwing up a relationship, Merli sings the following two lines, “Do you have somewhere to be? Instead we could keep making out to 98 Degrees” and then another line “The awkward long apology, much longer than the sex / Look I put my shirt on inside out to cover up the mess”. They’re moments that most old and young men probably can relate to.

“Elsewhere”; “Mom Jeans“, which is a relatively lo-fi number in the Mac DeMarco mold; “Alison”; “Santa Fe (Stupid Lovesong)”; and “Happy” continue the themes of teenage love, breakups, and growing up. Taken together, these five songs would perfectly describe the younger years of most people’s lives – of innocent love, maturation, growing apart from those we grew up with, and taking chances to discover something new and exciting or to try to recover something from the past.

Teenage Movie Soundtrack is aptly titled. Like the coming-of-age movies of the ’80s and ’90s, Heyrocco’s debut is the soundtrack for a new generation. And while there may be a couple decades splitting these age groups, the problems are the same; it’s just that today’s youth now have their own Nirvana, Smashing Pumpkins, or Blur to tell their trials and tribulations.

Teenage Movie Soundtrack is out now on Bandcamp, iTunes, and Amazon. The band has a few shows coming up, which you can find below.