Good day! Here’s your daily music fix known as The Matinee. Today’s feature once again includes six songs, but it’s a little different in that no one country is represented more than once and it truly is a global one. You’ll find artists from New Zealand, Romania, Israel, Australia, France and the United Kingdom, and the USA. Have a lovely Tuesday.

Two of our favorite under-the-radar artists have collaborated on a song, and one of them really isn’t a surprise. UK musician Mvrie Celeste has dabbled in many genres from electro-rock, EDM, alternative, electro-pop, and much more. Together with Paris-based, underground producer-for-hire Guiville, who has collaborated with many artists including Bentcousin, Celeste now heads into the psychedelic realm that has a folk underbelly with “Neon Oysters”. It’s spacey. It’s dreamy. It’s a fantastic song.

Temple Invisible – “Everything From Above”

Temple Invisible are a trio from Bucharest, Romania. Late in 2014, they self-released Enter_, a five-track EP that in a word was spatial. Their music is part trip-hop, part-garage, part-psychedelic pop – think a combination of Massive Attack, Portishead, Toronto’s Programm, and London’s Fifi Rong. From the EP is “Everything From Above”, an ethereal track that has an industrial foundation yet soars into the atmosphere with the lush vocals of Irina Bucescu and the humming pace of the programming and beats provided by Costas Ivanov and Daniel Olteanu. Temple Invisible’s EP, Enter_, can be purchased on Bandcamp. The video from “Everything From Above” can be found here.

We’ve often remarked about the great music coming from New Zealand. One of the genres that the Kiwis have been perfecting is melodic, theatrical pop. A relative newcomer is S A Reyners, the Wellington-based singer-songwriter who is also a one-man band. His latest single, “Saturday Afternoon”, has a bit of a throwback feel to the ’60s yet it is quintessential Kiwi with the vivid storytelling, the quick strums of the electric guitar, the addition of keys, and the dramatic vocals. The song follows an approach that artists like Andrew Keoghan and Anthonie Tonnon have enhanced.

“Saturday Afternoon” is the first single from Reyners’ forthcoming new EP. Reyners admits that he doesn’t know when the album will drop, but he will be intermittently releasing new songs over the next few months. The EP, though, will be a concept album that tells the adventures of a single protagonist. On this track, it’s about chasing love.

Bootleg Rascal – “Head In The Clouds”

Bootleg Rascal are a quartet from Sydney and the Gold Coast of Australia. They are getting ready to release their debut album, Asleep in the Machine, which will come out later this year. Their style is difficult to pin down. Instead, it’s a mash up of multiple genres, although hip hop and dub-step are at the foundation of the band’s sound with the integration of rock and pop (think former Chicago band Kids These Days). The latest single from Bootleg Rascal’s album is “Head In The Clouds”, which encapsulates the infectious combination that Carlos Lara, Jimmy Young, Jack Gray, and Scottie Grills have created. It’s the kind of song that is the perfect wakeup call to start the day.

From Israel comes Tzlil, a singer-songwriter from the city of Jaffa. Tzlil is getting ready to release a 3-track EP later this year, and she recently shared the first single, “City Friends”.  Working in collaboration with producers Roey Avital and Yakir Ben Tov, Tzlil has created a lush and breathtaking electro-pop song. It tickles with the ambiance of NYC artist VÉRITÉ and Sweden’s World Tour, music to be heard late at night and that allows you to escape your surroundings.

The video for “City Friends” can be found here. Tzlil’s EP will be released via Yafo Creative.

Lady Moon & The Eclipse – “To Infinity”

Lady Moon & The Eclipse are a seven-piece collective based out of Brooklyn, New York. Their music can best be described as soulful R&B. Their latest single, “To Infinity”, has a splash of acid jazz infused into the band’s graceful R&B sound. As a result, the track has a cool calmness and a subtlety that engages the listener into the love story told by lead vocalist Ngonda Badila. The song is one that you might find yourself unknowingly drawn to, captivated by the excellent musicianship and Badila’s gorgeous voice. 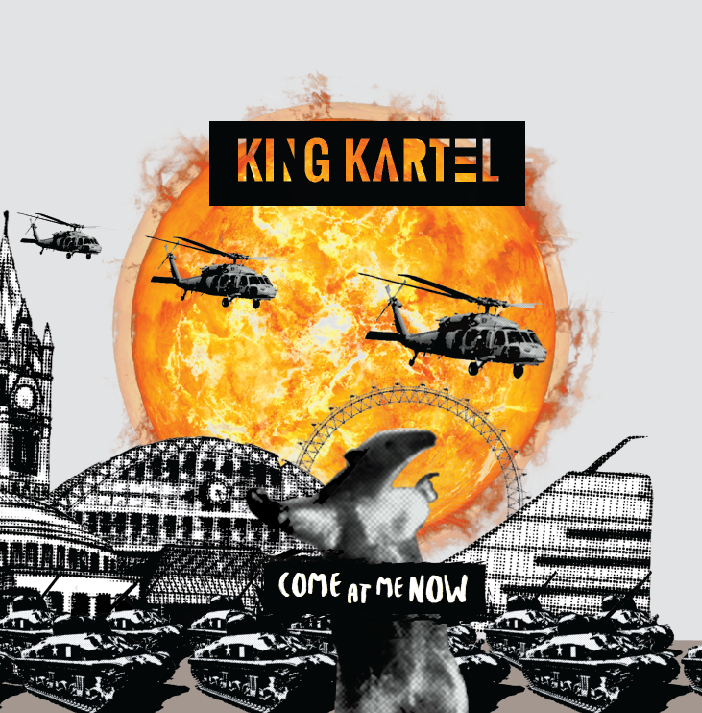 King Kartel – “Come at Me Now”