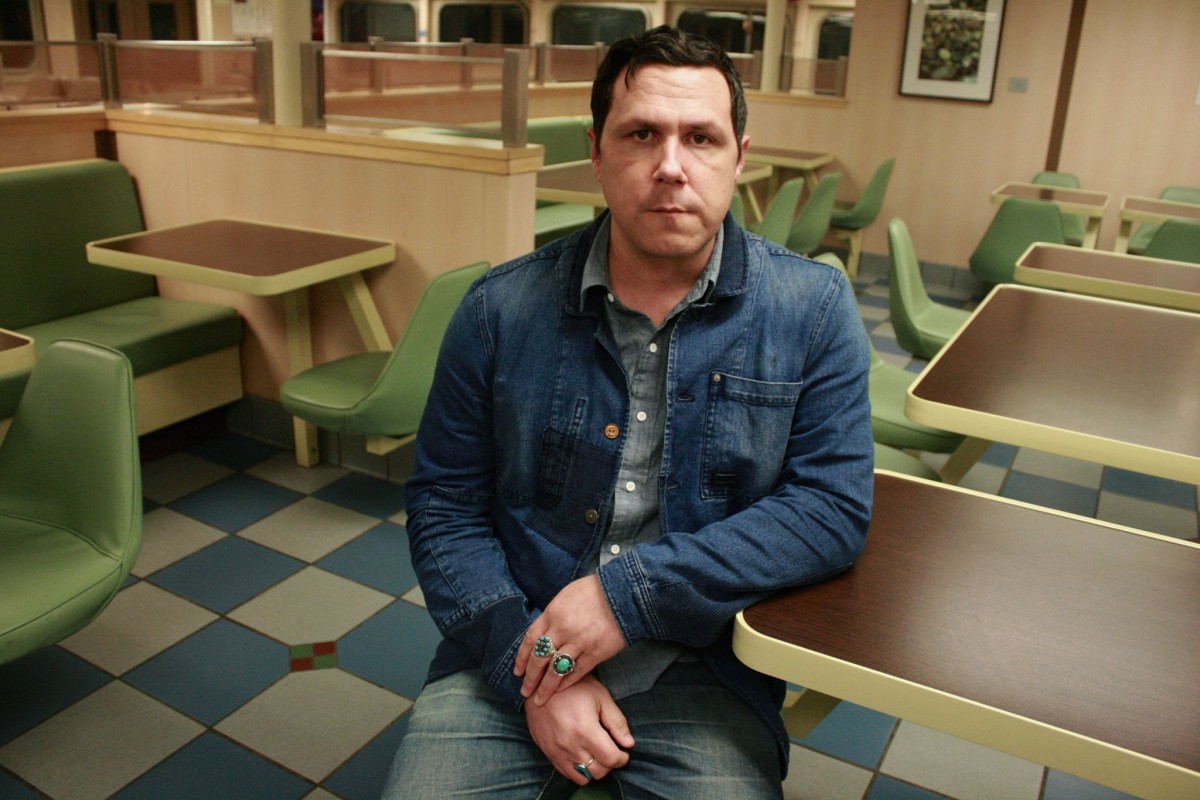 Damien Jurado has always been out of sync with his musical peers. He witnessed the nascent grunge movement from its Seattle epicenter – but as a singer-songwriter, not an angsty, rebellious punk. When the local, indie-folk revolution produced the likes of Fleet Foxes (then Father John Misty as a solo act) and The Head and The Heart, he was already far ahead of the curve, creating music that had one foot firmly planted in the sounds of the late-’60s and early-’70s. He creates concept albums in a time when attention-deficient listeners clamor for succinct pop singles bereft of substance. Furthermore, he’s unashamedly spiritual when agnosticism is de rigueur, choosing to embrace mystical exploration over psychopharmaceuticals. Basically every aspect of Damien Jurado’s life is an antithetical countermarch from the mainstream.

Combine those elements in an artist whose early musical influences (The Beatles, The Who, Pink Floyd) were masters of concept albums, and it’s no surprise that a set of supernatural exploration works are the result.

Jurado’s latest album is the final chapter in his dream-folk “Maraqopa Trilogy” that began with his 2012 album, Maraqopa. The inspiration for that fictional place came to him in a dream and introduced listeners to the land of the pivotal characters Silver Timothy, Silver Donna, Silver Katherine, and Silver Malcolm that appear in his 2014 album, Brothers and Sisters of the Eternal Son. He wrote and recorded that second album within days after he delved into the idea of returning to Maraqopa as its anonymous narrator, an artist who disappears and never returns. “You can never go back home if you were never shown,” he sang on “Silver Timothy.” But Jurado did return home last week when he released the culmination of that odyssey, Visions of Us on the Land.

One look at the cover art – a crashed car, a burning building, UFOs, and a giant walrus (to name a few) – indicates you’re in for another fantastical journey. In his signature storyteller fashion, Jurado does not disappoint.

This album’s first released single, “Exit 353,” has the same ‘70s-era dusty psychedelic tinges heard on his previous works. Where Jurado sounded comparable to Neil Young in parts of Brothers and Sisters of the Eternal Son, here his vocals faintly echo Graham Nash/The Hollies, Donovan, or America on some songs and are eerily similar to modern folk-rock demigod Jim James (My Morning Jacket) on others, especially “Sam and Davy,” “A.M. A.M.” and “TAQOMA.”

The hazy trippiness of “QACHINA” and “TAQOMA” evoke imagery of tumbleweed dotting a dusty trail that leads the narrator from a barren desert to a roaring bonfire by a cavernous shelter. In the acoustic sparseness of “On the Land Blues” (with lyrics that reveal the album’s title), you can picture the narrator pondering his journey under a blanket of starry skies.

One of the album’s standout tracks, “Walrus,” is a gently rollicking, saxophone-accented number that would sound heavenly performed at Colorado’s famed outdoor venue, Red Rocks. The legato tempo of “Orphans in the Key of E” could be a companion piece to Simon & Garfunkel’s “I Am a Rock” while the harmonies and repetition of “time” four times on “Queen Anne” hearkens back to their “Bookends Theme” released in 1968.

The entirety of this album speaks to Damien Jurado’s abilities as a master storyteller to guide the listener away from their own worlds and into his. Together with his longtime producer and frequent guest musician, Richard Swift (a member of The Shins, The Arcs, and The Black Keys), they bring the fictional Maraqopa into a nearly tangible landscape full of discovery and promise.

As the “Maraqopa Trilogy” concludes, Jurado proves once again that he is more than a musician; he’s a fellow traveler grateful for your company. If you have not yet discovered the beauty of Jurado’s world, this album is an accessible entry point that will leave you just as fulfilled as if you had been on the path all along.

Visions of Us on the Land is available directly from his Bandcamp page, as well as the Secretly Canadian online store, Amazon, and iTunes. You can follow Damien Jurado via his social media channels listed below. 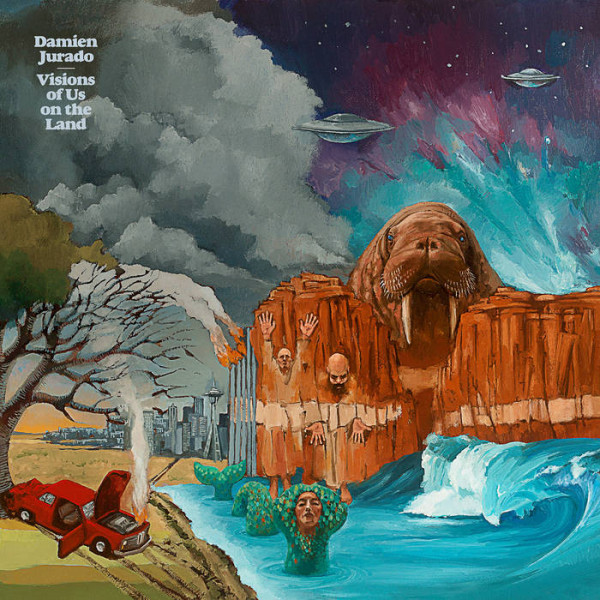 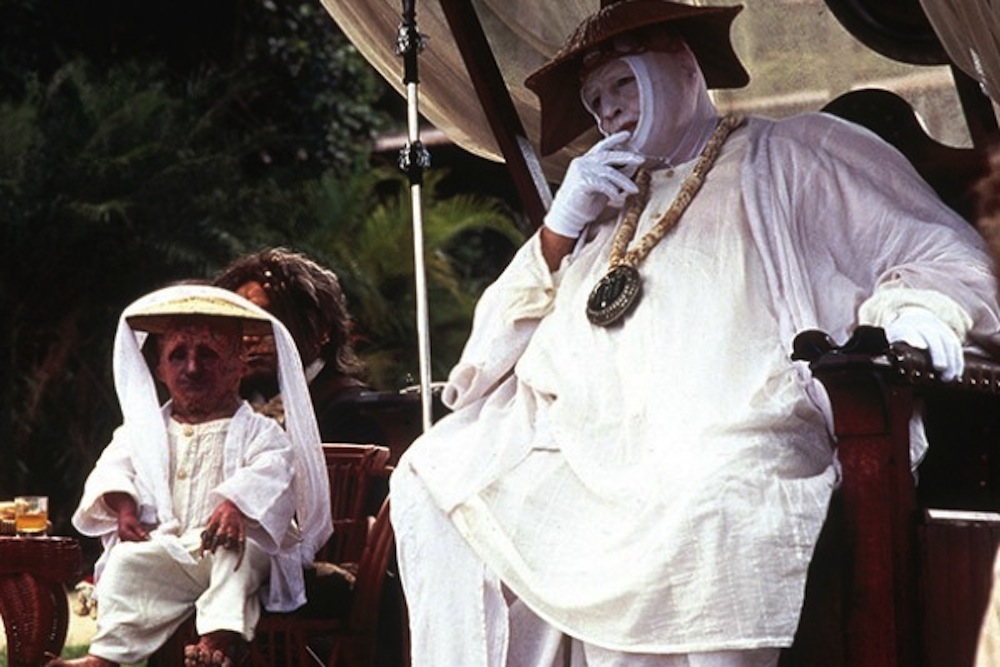 1 thought on “Damien Jurado – “Visions of Us on the Land””