We’ve reached the end of our the Artist portion of the Memories of SXSW ’16. Over fifty artists have shared with their fondest memories of THE indie music festival on the planet. Here are the final five, where we follow the exploits of an under-21 band, a couple making their SXSW debuts, and the realization that a band has “made it”. This is the one feeling that permeates across all the stories, and you can read Parts One, Two, Three, Four, Five, Six, Seven, Eight, and Nine.

I must say playing SXSW is not for the faint of heart. It is far more intense than a regular tour of the same length would be because from the time you wake up (very early) to the time you go to bed (or pass out, very late) you are moving. There is very little down time. There are dozens of bars competing for customers and within each you have dozens of bands all vying for the audience’s attention. The level of adrenaline and eagerness to please feels amplified because you know that the crowd in front of you could be at a zillion other interesting places and they are there watching you – so you gotta keep them there! It was a healthy dose of competition and camaraderie! We had five shows in three days. Many bands that we met had much more than that. But it was truly inspiring to be around bands and promoters and venue staff who were all doing what they do best, and working as cogs in the giant machine that is SXSW!

Shout outs to (just a few of) our favorite people we met/hungout with: 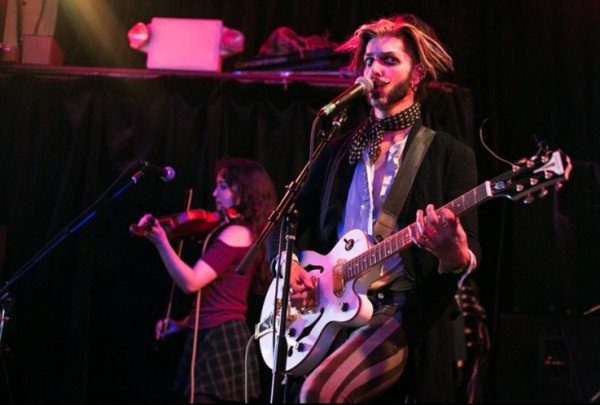 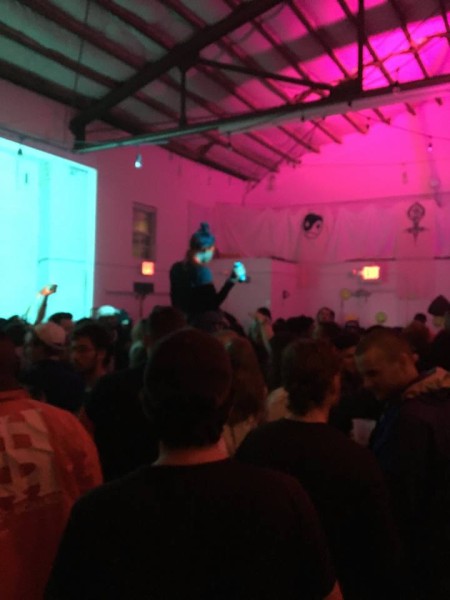 It was one of many stops on what turned out to be by far the best night at SXSW I’ve personally ever had. In true SXSW form, upon getting off stage at our second showcase (biz3, with Ho99o9 and Azul), I overheard an Executive from Twitter utter something that derailed our whole night. The fateful sentence was “……Skepta……Stormzy…..Apple Music Lounge”

We had no guest list, no timeframe, a load of gear and a XXL Vancouver promoter to pick up (Jason Sulyma would kill us if we didn’t bring him). It was like a CIA situation room.

Eli on his phone sorting guest list, Peter coordinating gear into an UBER, with me calling the next UBER from our hotel, and Jason frantically crossing 6th street making a mad dash for our hotel.

The rest of the story involves the euphoria of cajoling our way into the party, loving the performance and gallivanting all over Austin in the afterglow. The picture is the LA rap party we ended up at. We found a back room to have a breather and found some rather sad and tired looking locals who told us that yes, this was at one point their studio, and no, they weren’t expecting this many people here, and yes, they would like a Canadian cigarette.

Grant:
Out of my many experiences at SXSW, one night stands out as the epitome of of what it was like to be under-21 at a mostly 21-and-up, citywide music festival: Sneaky, excluded, and drunk anyway. Like nearly every day at SXSW, Wednesday was littered with shows missed (Thee oh sees stand out on this day) due to lines too long or an inability to get in due to age. After growing tired of the looming feeling of missing out, my bandmates and I decided to embark on a night of sneaking and creeping, getting away with as much as we could and “testing” the system in place that had prevented us from seeing so many shows we had desperately wanted to catch. We began by heading to Scoot Inn to see our friends Tacocat. This was a 21-and-up show, but we managed to walk in with them and our mutual managers and make the show. One thing we found was that once you’re in, you’re in. So we went for it and began to drink ourselves into oblivion.

After Tacocat’s set, we ventured back to the Mohawk to see if we could rattle our way through the line to see Downtown Boys and Sheer Mag, two other acts we were aching to see this year. But to our dismay, the line was still well around the corner and the security was dead tight. So we hopped next door to see what was happening at Cheer Up Charlie’s, hoping to meet up with Nathan from So Pitted, who we had planned to hitch a ride back to our hotel with that night. It turned out Charlie’s was 21-and-up, and Nathan had made it in to the Mohawk. But after being turned away from Charlie’s due to age, Henry and I managed to walk right in like we owned the place, and no one questioned us. So we got a couple drinks and touched base with Gianni, who was back at the artist-after-dark tent, the only place a group of underage artists like us can get free drinks without ID.  After heading there and meeting up with our friends Dude York, we continued to drink ourselves into oblivion and finally accomplished our fleeting goal. Sadly it didn’t shake the feeling we had missed out on a lot of South By. We made the best of our week in Austin and relived our drunken teenage night creeps, playing our shows and trying to deal with the restrictions put on us (constant X marks on our hands in permanent marker for one), and making some unforgettable moments and connections.  But still, the short 10 months separating me from the “of age” festival goer felt like a huge barrier that prevented me from fully experiencing the festival.  But what can you do?  Nothing but sneak around and make the best of it, and that, we certainly did! 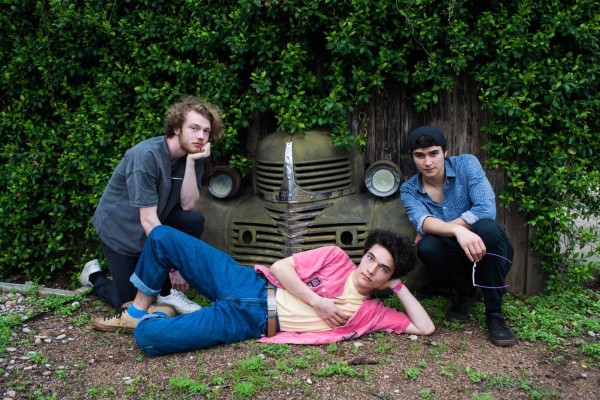 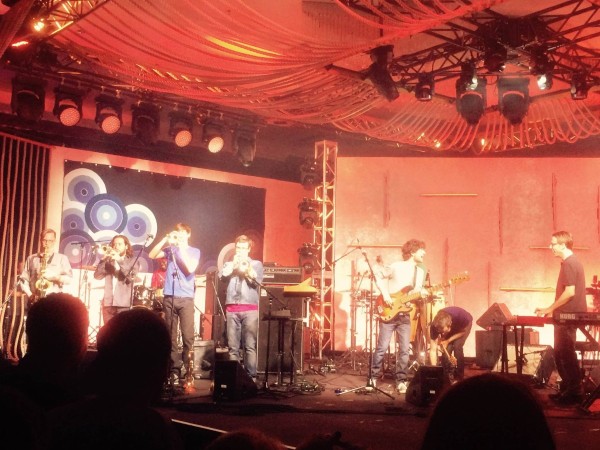 Gianni:
The highlight of SXSW was a very “classic SXSW” moment. We had just come from the artist lounge, where we had waited in line for a good half hour to get our fill of free Bud Light (which would become the self-imposed drink of the week) as well as free backpacks and plenty of goodies to fill them with. We were told – or so we thought – to head to Hotel Vegas to meet with our managers then head over to Amazon’s setup at Hotel Van Zandt for a picture/interview/what have you. So we headed across the freeway toward Hotel Vegas and, making great time, we stopped to grab some delicious street tacos and eat them on the way.

Once I ate my first taco, we got a message from our manager saying something to the effect of “where are you guys, are you coming to Hotel Van Zandt?!” Now at this point, we had already walked a good mile-and-a-half in the opposite direction of Hotel Van Zandt. So we picked up the rest of our tacos, put on our backpacks and started sprinting back across the freeway in the Austin heat toward where we were apparently supposed to go in the first place. I have never had to scarf down such a spicy taco while moving so fast. Anyway, when we made it to the hotel, we were whisked into a room walled with Take 5 bars and records. We hung out for a bit, I entered a raffle, and they took our picture and then told us to take as much Take 5 as we could carry. So we did exactly that and we still have a good 8 boxes of 18-count, Take 5 boxes sitting in our van with us now. In short, Bud Light, walking, tacos, sweating, and free stuff pretty accurately sums up our first SXSW. 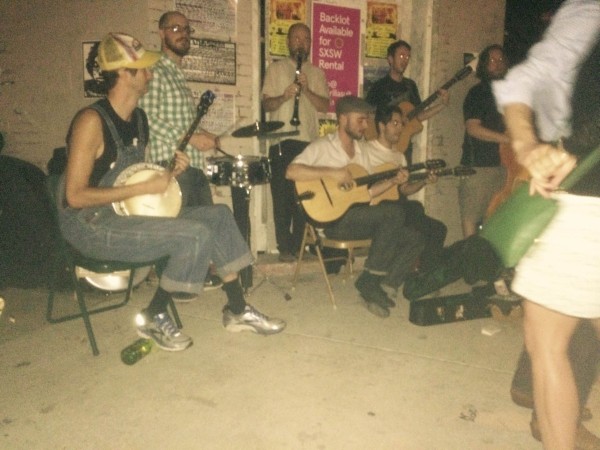 Henry:
SXSW was full of diversity in music and food alike. I remember the first night at the festival. I was seeing Seattle-based, space-punk band So Pitted for the first time at the Longbranch Inn. I took a walk down 6th street before they played to kill sometime. I ended up getting the best catfish of my life from a food truck I believe called “Three Girls Soul Food”. Mmmm my word was that not just exactly what I needed at that moment! On the way back to the concert, catfish and waffle fries in hand, I encountered a wonderful, grassroots, gypsy-swing band set up on the corner of a busy street. Couples were shyly swing dancing and diverse music lovers all congregated to appreciate this moment of homemade tunes. Diverse musical moments like this are exactly what South By proved most useful for.

We always have a blast playing in Austin, and SXSW was no exception this year. The whole atmosphere is unreal. Everyone there is ABOUT music, which makes it a sort of Mecca for upcoming artists like us. One of the best things about the whole festival is that everywhere you go, some band is playing and they’re GOOD! It might be indie folk-metal or something unheard of, but it’s good stuff.

The shows we played were great: very intimate, which I enjoy because it really lets me zone out and get lost in what we’re playing. We played two shows in one day, met a ton of people, and we got to catch up with our manager & publicist who live on the opposite end of the country. On the way home, we had the chance to stop at some very unique places to shoot our upcoming music video for “Widowmaker,” like the Bonneville Salt Flats (I’m soaking my shoes to get the salt out as I type this). Now that we’re home, it’s time for us to finish up the video and prepare for our EP release next month, we can’t wait to show it to everyone. 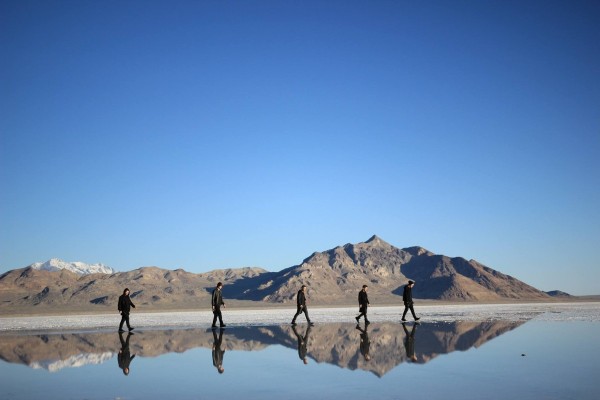 1. While we were at SXSW, we saw an amazing band at the Korean showcase on 6th that blew us away. They were called Bye Bye Badman. Discovering that there is a showcase that features bands from Korea was a highlight for us, somehow we had missed out on this the last two years!

2. So the last two years going to eat at Gus’s Fried Chicken has become a must when visiting Austin. The day we decided to go eat this insanely decadent meal, the band had separated into two different groups: Marika and Miro went to the YouTube lounge to meet up with Seattle friends, Ryan Crowther and Andrew Ginn, while Toby and Seth were angels and loaded the gear from the gig back at the place we were staying :).

On our way to meeting the boys at Gus’s, a storm broke out and we ran through the rainy streets as lighting bolts highlighted the sky in between the sky scrapers. People had created makeshift ponchos out of black garbage bags and one guy was singing “Dancing In the Rain” as we approached the long line for fried chicken. In the end, the meal was amazing and Miro did not puke from eating too much mac and cheese like last year.

3. One of the days we went to this house in the suburbs of Austin and taped a live video of an original song and then we covered a song from a Texas artist. We chose “Losing You” by Solange Knowles. I enjoyed this because in the past we have always had at least one gig during the week which has taken us the opposite direction of downtown and instead to a random hidden spot in the suburbs. It’s just cool to see how far the festival reaches away from the craziness of 6th street. 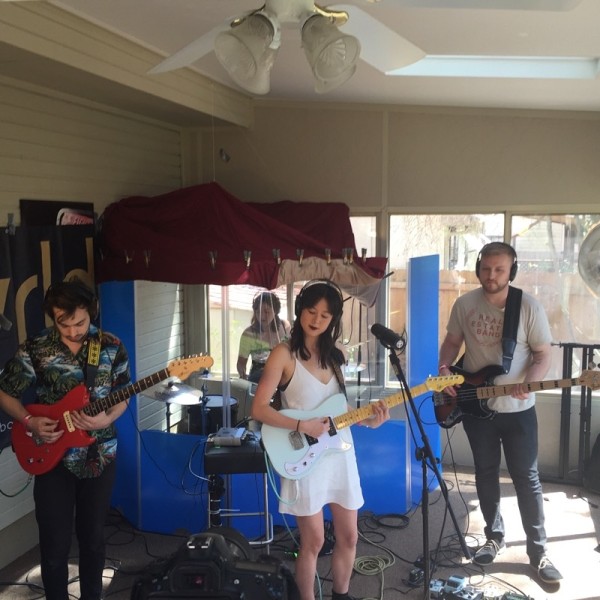 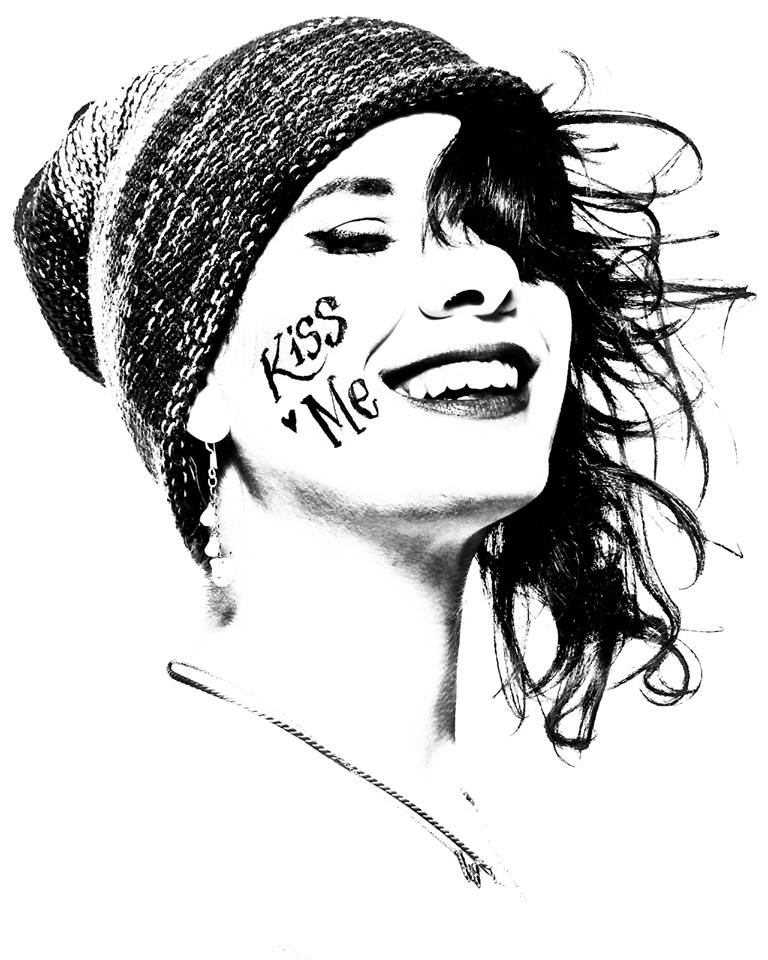 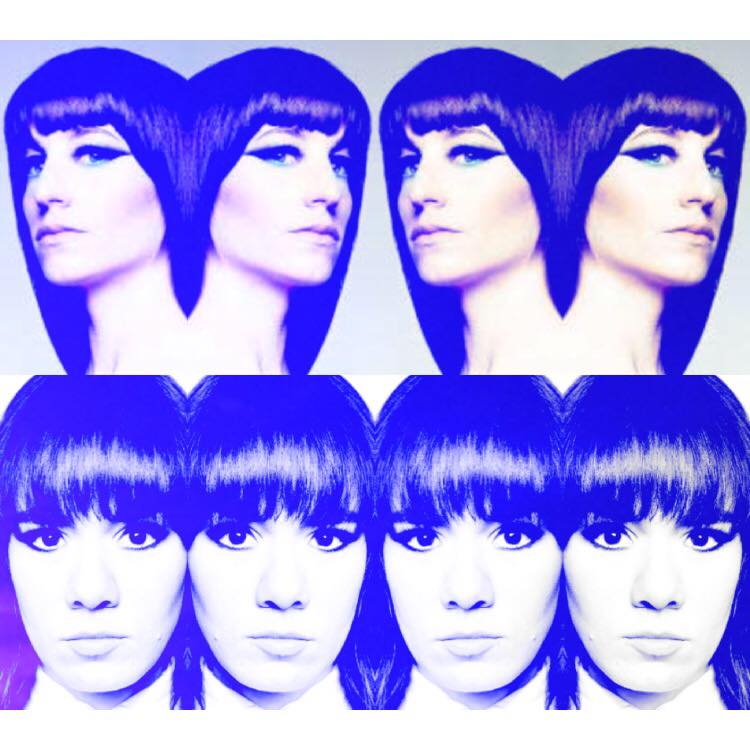