Ali Beletic is a rebel with a cause, a modern-day version of James Dean who is no longer willing to play by the regular rules of engagement. Instead, she was going to do things her own way. Traveling across the US in her muscle car, she found solace in the hottest part of America – the Sonoran Desert that borders California and Arizona and where only the most hardened survive. It was not Brooklyn, but it was a place for inspiration. It would be the place this rebel would call home for several years.

And during that time, she meticulously developed Legends of These Lands Left To Live, a raw and gritty album that despite its stripped back approach leaves a visceral impression. Aptly named, LEGENDS is Patti Smith of the ’70s reincarnated. It is a mirror of Dan Auerbach as a solo artist. It is also a perfect reflection of P.J. Harvey at her introspective best. And these characterizations are personified on the album’s first three songs.

The loneliness and coarseness of the desert bellows on the slow rocker “Ends of the Earth”, as the elongated guitar lines act as the endless echo of the night to the stillness of Beletic’s voice. “Stone Fox” offers one of the album’s two, unassuming anthems, as this gritty number echoes The Black Keys during the early days. The gritty ballad “So Much to Love” is a love song for the individual, of being free in the vast wilderness.

Although the first three songs offer a summation of Legend‘s organic foundations, there is much more to discover. The solitude heard on “Walk This Earth”, which has Beletic recalling the long, lonesome drives in her muscle car, could be the flip side to Neil Young’s “Unknown Legend”. It is the female protagonist telling us what she sees, hear, and perceives. “Dead Serious”, the album’s other anthemic rocker, is spectacular. The heavy bass lines and pounding drumming create the harrowing atmosphere. Beletic’s voice, meanwhile, drips with pain and anger as a person who wants to be heard. It is the anthem of the rebel, of the individual who will not conform to the ideas of the masses.

Whereas “Dead Serious” speaks to playing by one’s own rules, the pulsating “Lit Museum” is a condemnation of the current games that are being played as people chase the almighty dollar at the expense of sacrificing spirituality, simplicity, and our natural home. The closer “Wild American” offers an image of a simpler life, and what an American could be outside the concrete jungles. This image encompasses the entire album – one that foresees great things for humanity if we opened our minds. It is the image of the ideal American, a rebel fighting for a cause. A rebel who just might become a living legend alongside Patti Smith, P.J. Harvey, and Dan Auerbach.

Ali Beletic’s Legends of These Lands Left To Live is out now via Lightning Records. Pick it up at the label’s store, iTunes (US | CAN | UK), and Amazon. 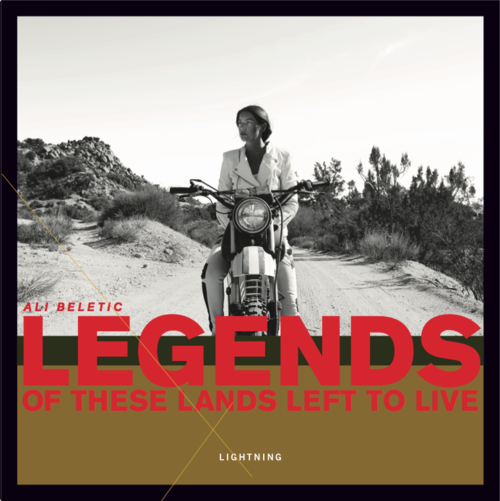