We’ve come to the conclusion of our Favorite 50 Albums of 2016 with Part 5. This final group is the most diverse. Transcendent country, fantasy orchestral pop, classic rock, Big Band soul, and far-reaching indie rock are all featured today. Take a read, take a listen, and celebrate these wonderful artists and bands. Then afterwards, rewind with Parts 1, 2, 3. and 4. 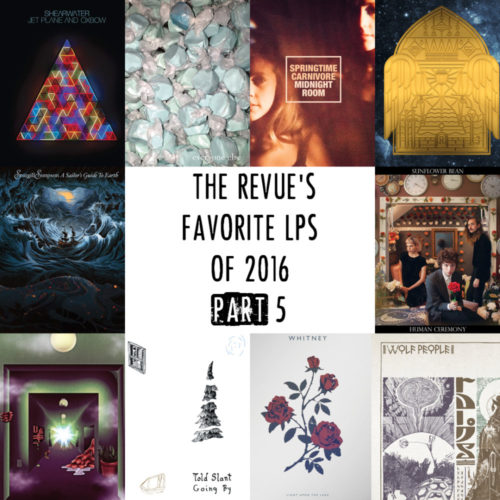 Shearwater frontman Jonathan Meiburg sang the phrase “let this dream be realized” on their 2008 album, Rook. Fast-forward eight years, and his wish has been granted. His dream may not have been to make a powerful, politically-charged album, but this year’s Jet Plane and Oxbow is just that.

The band’s ninth studio album (and their second on SubPop) is a bold, propulsive affair. What it’s not is a mellow bookend to Rook. If anything, the two albums are polar opposites, a study in growth. From the warmly shimmering opener, “Prime,” to the fierce, ‘80s synth-driven “Quiet Americans,” Meiburg imbues Jet Plane and Oxbow with urgency. Shearwater has always displayed dynamic range and sonic depth, thanks in part to Meiburg’s unmistakable vocals. His sonorous tone is – to borrow his own lyrics from “Backchannels” – “warm and nacreous” throughout, even when reverb-enhanced on the Talking Heads-esque “Filaments.” While this not a blatant protest album, its songs quicken the pulse and demand your attention. Lyrics from “A Long Time Coming” enforce the urgency: “And as the shadow arrives on the face of your innocence / You feel the shock in your eyes and the shaking in your own hands.” With a sound this bold, it’s hard not to feel your hands shake or be blow away by the force of this incredible album. ~~ Hollie

Slothrust – Everyone Else (Dangerbird Records)

When a record kicks off with something as badass as “Surf Goth,” you know you’re in store for something great. Slothrust’s Everyone Else is that something great. The three-piece of jazz students-turned-grunge-inspired-rockers have been creating a unique fusion of genres since their early releases.

Right after “Surf Goth” the band seamlessly transitions into “Like a Child Hiding Behind Your Tombstone.” It’s a perfect example of why this record is on this list. It has a swing backbone supplied by bassist Kyle Bann and drummer Will Gorin. Lead guitarist and vocalist Leah Wellbaum, meanwhile, executes the solos effortlessly and in a fashion that feels like her voice is floating. There’s “Horseshoe Crab,” which is this incredible, slow-building track. All of the lyrics are repeated twice, but the second time around the song becomes an unstoppable force. “Pseudo Culture” has some of the most intense drumming on Everyone Else, along with an amazing ending where the harmonies give way to an epic guitar solo before that circles back to the harmonies again. Wellbaum’s lyrics can be a bit surreal, and there’s wit and emotion to everything she sings on Everyone Else. It all just comes together so well, and Slothrust continues to get better with each release. ~~ Rich

When Greta Morgan launched her solo project as Springtime Carnivore in 2014, her self-titled album was simply dazzling and an easy inclusion on our Favorite Albums list of that year. It was a mix of fantasy and introspection, as The Hushed Sound member re-introduced herself to the music world. Two years later, her sophomore album, Midnight Room, dazzled us once again. This time, however, a more confident and bolder Morgan is displays.

The fantasies are more adventurous with the sci-fi anthem, “Face In The Moon,” and the Wild West love story unveiled in the title track showcasing Morgan’s talent for bringing to live the unbelievable. During the moments of introspection, Morgan shares a bit more of herself, such as on the immensely intimate “Nude Polaroids” and the immediate “Rough Magic.” In a day and age of one-off artists, the clock has yet to strike midnight for Greta Morgan. Instead, her sophomore album as Springtime Carnivore reveals a woman just entering her peak as an artist and songwriter, making her future awfully enticing to watch. ~~ Ben

Two years after their debut record, the Alabama-based band St. Paul and the Broken Bones gave us a knockout record. Sea of Noise is an homage to the ’60s and ’70s Memphis soul scene. And like the music of the era, this record is intoxicating and gets your feet moving. Led by the soaring, charismatic vocals of Paul Janeway but as a band they have never been tighter sounding. The horns have more punch and each song shows more emotion and depth. The production level of the album has increased dramatically since their first. This Alabama band is headed far beyond their comfort zone and into a new, sophisticated territory of music. ~~ Zac

It should be no surprise to see Sturgill Simpsons latest effort, A Sailor’s Guide To Earth, on this list. An artist with virtually no radio airplay, yet he still is the surprise contender for Album of the Year at the Grammy Awards in February – albeit the underdog.  Now if you still haven’t heard of him, he will be performing on Saturday Night Live on January 14th for the whole world to know, “Who the f*** is Sturgill Simpson?”

Besides these accolades, A Sailor’s Guide To Earth is stunning and stretches his musical boundaries to the max. The album at is not particularly country (notwithstanding his voice), but one that has transformed into a piece of art. The record was written for his young son, who was born right as Metamodern Sounds in Country Music was being released. The record tries to instill a sense of knowledge in his young son on “Welcome To Earth (Pollywog)” and “Brace for Impact (Live A Little).” He dives into aspects from the Navy to dealing with drugs and parenthood. The decision to add a horn section (by the Dap-Kings, no less) into the sound is brilliant and the guitar effects are endless. The other treat is Simpson’s marvelous transformation of Nirvana’s “In Bloom” from a grunge anthem to a gritty blues rocker. The genius of Sturgill Simpson is boundless, and with A Sailor’s Guide To Earth he has created a transcendent country gem that puts him alongside the genre’s legends. ~~ Zac

To call Julia Cumming’s voice anything less than dreamy would just be incorrect. There’s this quality to it and her execution that is completely entrancing. Add to that the guitar work reminiscent of Wish You Were Here-era Pink Floyd in the first track, “Human Ceremony”, and it is so easy to get lost in this record. Sunflower Bean rocks hard on tracks like “Come On” and “Wall Watcher.” They channel shoegaze roots with “Creation Myth.” The record closes with a totally infectious track, “Space Exploration Disaster,” which features a great vocal exchange from Cumming and Kivlen of an incredibly singable refrain of “Run Away From The Planet.” Seriously, good luck getting that out of your head. ~~ Rich

Just when you think John Dwyer, Brigid Dawson, Petey Dammit, and Mike Shoun have done everything possible within the garage- and psychedelic-rock spheres, they unleash A Weird Exits. The 17th studio album by Thee Oh Sees is a hurricane of a record. It is loud and boisterous, unorthodox and trippy, and just a full-blown riot.

The album is highlighted by the bone-jarring “Ticklish Warrior,” the wailing “Plastic Plant,” and the absolutely hypnotic “Crawl Out From the Fall Out” which display the range and imagination of the indie-rock legends. But in case we thought they were one-trick ponies, they deliver one of the most hallucinating songs of the year with “The Axis.” It is John Lennon, Flaming Lips, Black Mountain, and The Besnard Lakes all rolled up into one majestic song. Calling A Weird Exits brilliant would be an understatement. Instead, as we look back at 2016, it likely will be recognized as a seminal moment in music. ~~ Ben

Told Slant’s Felix Walworth can be heard on six different records that were released in 2016, which is a testimony to Walworth’s dedication in helping create some truly extraordinary art. And that dedication shines through on Going By, Told Slant’s second album.

“If it’s not stuck in my head, it’s not good.” Those are the words of Told Slant’s Felix Walworth. Going By features this captivating repetition that creates a cohesiveness throughout the record. It perfectly captures the passage of time. “High Dirge,” “Eggs In A Basket,” and “Low Hymnal” are an incredible trio; each song flows into the next, and themes start to emerge. Lines and melodies start to repeat. “Tsunami” is one of the year’s best tracks, lyrically and instrumentally. The chorus of “Isn’t this silly and aren’t you beautiful” is executed in a gorgeous way and repeated each time by some of Walworth’s collaborators, including Girlpool, eskimeaux, and Bellows. “Delicate” is the rare rocker on Going By, but by the end it dies down and references back to “Low Hymnal” as Walworth sings “I wanna battering ram this life” with little more than a whisper. When the record closes with “Cannon Balls” and Walworth repeats “Isn’t this silly and aren’t you beautiful” for the final time, it’s just incredible. All you can do is spin it again. Going By gets better with each listen, as the listener picks up more things along the way. ~~ Rich

Every year-end there will be a lot of talk about modernizing in any industry, not just music. Bon Iver built an album around a custom audio codec, for Milton Babbitt’s sake! But what’s beautiful about art is that no matter what the era, there are always a few throwbacks who break through. Or un-break through. What’s the opposite of break through? Put back together again? Maybe that’s what Whitney has done this year. The project of ex-Smith Westerns bandmates Max Kakacek and Julien Ehrlich, Whitney’s debut album Light Upon the Lake is a straightforward, soft folk-rock album with quiet, soulful flourishes. It’s a generous, healing piece of music that lets the listener in and doesn’t push you too hard to see things their way. The songs present themselves and allow you to interpret them however you like, put whatever emotion you feel you need into them. They put you back together again.

Classic guitar hooks permeate the album, and a “na-na-na” chorus isn’t far off at any point. While some throwback, soul-influenced rock albums can sound fake or oversold, Whitney does a great job of being straight-ahead and groovy while not overplaying their hand or overstepping their stylistic guidelines. Ehrlich’s soft, honest delivery and the gentle, easygoing production style keep the record enjoyable without weighing it down. Track to start with: “No Woman.” That guitar riff!

Trying to describe Wolf People‘s music is nearly an impossible task. They’ve basically taken every imaginable influence within the rock sphere and poured into their sonic blender to create a sound that has no rival. Sludge, prog, psychedelic, doom-rock: they’re all heard on their spectacular new album, Ruins. The record is a sonic and, literally, a lyrical adventure that brings 16th- to 18th-century myths and stories to the present day. It is Edgar Allen Poe’s The Raven brought to life, Beowulf retold, and Alfred Hitchcock’s The Birds reincarnated, filtered through a prism of blistering guitars, cataclysmic percussion, and a fierce bassline that will have your heart pounding. This isn’t a slow retaking of rock but a full-blown assault.

No other album this year starts off with four mind-blowing songs like Wolf People’s third effort. “Ninth Night”, “Rhine Sagas”, and “Night Witch” are the hammers – three ferocious, whiplash-inducing numbers. Meanwhile, “Kingfisher” is the anvil and the album’s heartbeat with its slow-building, dramatic approach and timely message. These are just four of Ruins‘ 12 songs with the other eight matching the intensity and ingenuity of the opening quartet. Whatever people want to call Wolf People’s music, Ruins reveals one absolute certainty: Jack Sharp (guitar/vocals), Tom Watt (drums), Dan Davies (bass), and Joe Hollick (guitar) are musical geniuses. ~~ Ben 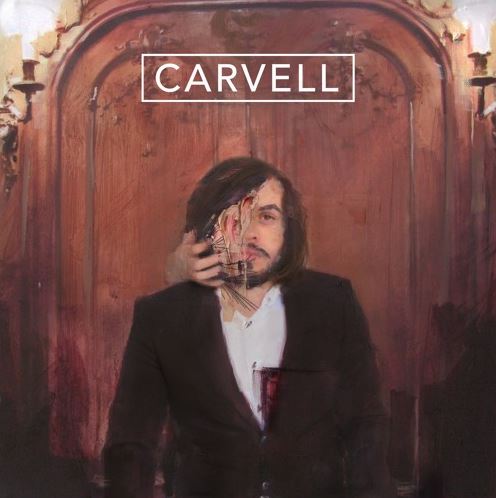