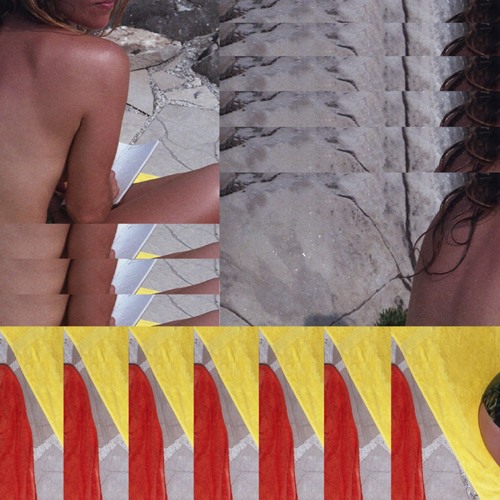 The Matinee March 10th edition features more songs that fall under the category of “instant classic”. Well, at least be in the running for our favorite songs of the year. This batch of nine begins with one of our favorite bands and ends with a song that is one of the funniest of the year. For what it’s worth, Jeanette, Wendy, and Ben are taking on today’s duties. 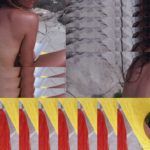 It’s hard to believe that for it’s been a decade since Young Galaxy‘s mesmerizing, self-titled debut album was released. Many of us here endlessly spun the CD, immersing ourselves in the splendor of “Searchlight” and “The Alchemy Between Us”. Much has since changed for the band with Catherine McCandless taking on the primary lead vocal role and the band delving more into electro-pop. One thing that hasn’t changed – Young Galaxy still produce some of the dreamiest and most cinematic songs. Their new single, “Stay For Real”, is more evidence of the group’s ethereal brilliance.

With delicate production work and rhythms that shimmer like stars in a moonless sky, Young Galaxy have crafted a stunning and intimate song. While the song is restrained, it is this simplicity that accentuates the drama and haunting nature of the song as well as allowing McCandless’ vocals to shine.

“Stay For Real”, however, isn’t intended to take us to exotic places or relive long-forgotten memories. The song was written in response to the events of the world over the past 18 months – the Syrian refugee crisis, the US Presidential election and its aftermath, and the passing of legends we idolized. It is a reminder that we must stay strong, stay unified, and fight for what is right in challenging times. For all the times Young Galaxy have moved us, they have delivered their most poignant and compelling single at the perfect moment.

All proceeds from “Stay For Real” will be donated to organizations defending the rights of the marginalized. They include PIVOT (Canada), ACLU (USA), and W.A.V.E (EU). Stream the song on Spotify or purchase it on iTunes. 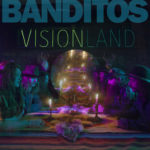 One of the bands who blew us away and left a lasting impression at the 2016 Newport Folk Festival were Banditos. While they had an early time slot, they blew the roof off the Quad Stage tent. It’s a performance we will remember for a very long time. They told us at the time they were working on new music, and the hope was that the album would be ready last fall or early in 2017. The wait is finally over, and the Birmingham-based six-piece finally gave the news we’ve been waiting for. Their new album, Visionland, will arrive in stores on June 23rd via Bloodshot Records, and the lead single is “Fine Fine Day”.

The song is an old-fashion, southern-rock number. It starts off with a trippy intro before settling into a barn-burning, knee-slapping, hip-shaking groove. You cannot help but jump out of your seat and start dancing or at the very least clap to the catchy rhythms. The guitar solo in the middle of the song is awesome, but let’s not take away from the brilliant instrumentation throughout. The keys are Jerry Lewis-esqe, the banjo rocks like Tall Tall Trees, the bass is old-school country-rock, and tje drum work would make Steve Gorman (of The Black Crowes) proud. Lyrically, the song personifies the band – a group of dreamers and optimists who only see fine, fine days ahead. 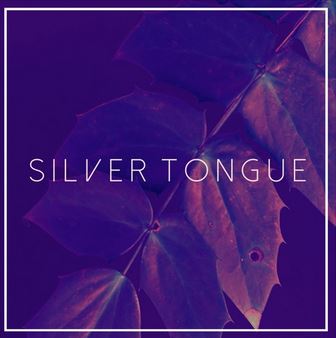 Combine powerful yet ethereal vocals with electronic trip-hop loops and what you’ll get is hypnotic, sultry electro-pop. We have long been excited about CLAVVS, an up-and-coming duo comprised of acclaimed producer Graham Marsh (he’s won four Grammys) and singer Amber Renee. With each new release, we find more reasons to become completely enamored by this duo.

“Silver Tongue” definitely does not let us down. Their newest single entrances us with Ms. Renee’s enticing vocals set against Mr. Marsh’s oh so addicting beats. The song is like the majestic grooves of Phantogram immersed in the exoticism of Massive Attack, and soon this duo will be achieving the same heights as these greats.

“Silver Tongue” is from their forthcoming album release titled World Underwater. The album is out March 24th. Pre-order the LP here and get this song and 4 others instantly. 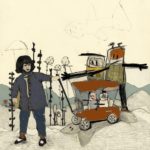 Intensely personal yet completely relate-able. That is the magic of Girlpool. They did it back in 2015 with “Before The World Was Big” where we could barely listen to the track without welling up with tears of nostalgia and the feeling of being lost, and now they’ve done it again with their latest single “123”.

“123” draws you in with those instantly recognizable Girlpool guitar chords and soft, sweet vocals. Each note plucking at your emotions like they do their instruments. But Harmony Tividad and Cleo Tucker fill out their sound a bit more on this latest, and take their emotion, instruments, and vocals to their limits soon after the soft opening. This gorgeous song still carries those typical Girlpool themes of isolation, being on the outside, and of finding/being with others that feel the same, but this one rocks a bit more while still remaining superbly intimate. You’re not in a larger room with a bigger band, you’re in the same room completely filled with sound.

This is a spectacular first listen off of their upcoming album release Powerplant available through pre-order now and set for release May 12th on Anti Records.

Girlpool is Harmony Tividad and Cleo Tucker. Girlpool are heading out for a slew of tour dates starting with some shows at SXSW. You will not want to miss this brilliant duo. 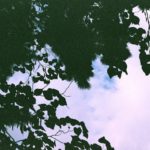 By the time the Will Marsh-led project Gold Connections’ debut EP comes out in three weeks, we will have written about each song. This just tells you how gifted the young man from Charlottesville, Virginia is. Sure it helps having a friend like Wil Toledo (a.k.a. Car Seat Headrest) as a friend and co-producer, but an artist doesn’t get this far without having serious songwriting chops and musical talent. In addition and as he has shown with “New Religion” and “Faith In Anyone”, Marsh is able to take the grim and foreboding and make it exhilarating powerful. His new single offers more of the same.

“Isabel” is a five-alarm fire of an indie-rock tune.  The song starts off innocently enough, as Marsh’s wail takes on the tones of Clap Your Hands Say Yeah’s Alec Ounsworth as he sings about Isabel. Its final three minutes, though, are just incredible, as the songs builds into a neck-spraining, hair-raising monster. The frenetic rage brilliantly mirrors the disappointment and confusion in Marsh’s lyrics and vocals, making us empathize with the young singer-songwriter’s abandonment.

We’ve said it once before and we’ll say it again, Gold Connections will be one of the year’s best success stories, and it starts next week with his appearance at SXSW.

RIYL: Bec Sandridge, The TenFiveSixty, Vita and the Wolf

With each single Kraków Loves Adana releases, the more we regret not discovering the German duo sooner. For a decade, they remained a secret of the Hamburg and Berlin music scene. Only this year have they started getting the attention they deserve, but they still remain a hidden gem. Why this remains is a mystery of us, but then again we didn’t learn about Deniz Cicek and Robert Heitmann until last year. Maybe and hopefully things will change when their third album, Call Yourself New, arrives on March 24th via Better Call Rob.

Early this morning, Kraków Loves Adana released the record’s fourth single, “Beautiful Lie”. The song is a stunning rocker. The dark throb of the bass line is right out of Joy Division’s “Shadow Play” while the crystalline, delayed guitar notes could be mistaken from The Jesus and Mary Chain’s lengthy repertoire. But as is usually the case, Cicek’s deep, enchanting vocals and her wonderful songwriting are the showstoppers. All you can do is quietly close your eyes, breathe in the song’s beauty, and believe in Cicek’s message of hope and wonder. For what it’s worth, she’s made us believers.

“Hell” is the debut single by Little Rêd, the project of Welsh singer-songwriter Ellie James. In a short sentence, we are completely entranced by her ethereal vocals. The young woman’s voice is something truly special, like magic that appears out of thin air. Couple it with stellar songwriting, and you have a star in the making.

The song chronicles the battle between fear and love while exploring themes of heartbreak, anxiety and bravery. These are deep and emotional subjects that even veteran songwriters have trouble mastering. But for James, she has written a compelling and imaginative song that is close to being an instant classic. Further demonstrating her mastery is the formula she uses. There aren’t many effects or exaggerated instrumentation on the song; instead she allows her vocals to shine against harmonious soundscapes. We look forward to hearing more from Little Rêd.

“Hell” is out now and released via Seahorse Music. 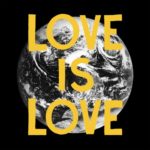 Woods have retained the exotic flair they flavored their last album, City Sun Eater In The River of Light with in their newest release “Love Is Love”. Usually known as psychedelic folk rockers, this five-piece band have begun infusing their music with the other-worldly sounds of Ethiopian jazz. Bringing global sounds into this song seems fitting given the theme.

“Love Is Love” was written as a response to the recent U.S. election and is a song of light and hope in uncertain times. It’s certainly a statement that love is the constant, knowing no borders. Gorgeous detailed and delicate guitar riffs go in unexpected places while the repeating vocals seem to offer both the answer and the question of love being enough.

“Love Is Love” is the title track off of Woods’ upcoming album out April 21st on the Woodsist label. Pre-order of digital, 12″ LP, or cassette are available on the Woodsist website.

Woods is comprised of members Jeremy Earl, Jarvis Taveniere, Aaron Neveu, John Andrews, and Chuck Van Dyck. You can follow this band on their recent European tour as they continue to grow and evolve. 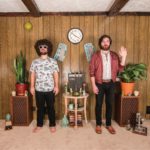 Artists are inspired by a lot of things, but this single by New Jersey duo Yawn Mower might be one of the most unusual. It is also one of the funniest songs you will hear in some time. “Shed Is Old” is indeed about a shed. It’s not one owned by either Mike Chick or Biff Swenson, but a shed they saw on the side of the road (probably driving down Route 35).

The song is a riot, echoing Pavement’s quirky sense of humor and gung-ho indie-rock. And like some of Pavement’s song, this one will be stuck in your head for days and you’ll be sharing it with your friends. Next thing you know, you’ll be getting out the air guitar and stickless drums while singing:

Shed is old.
That shed was leaning.
Was it termites?
Or maybe lead?
Maybe she only needs a little elbow grease.
A couple nails to stop the floors from yelling “creak”.

After singing this song, we’re motivated to do some yard work. OK, maybe not.

“Shed Is Old” is from Yawn Mower’s new EP, What’s All This New Piss?. It’s available on Bandcamp. 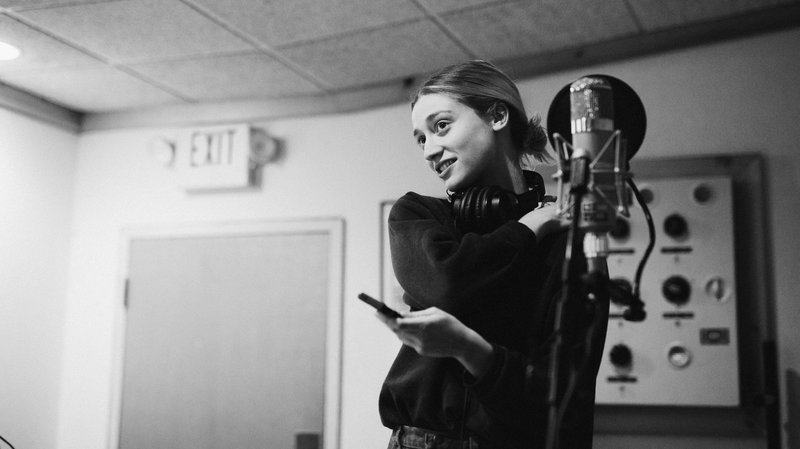