The Matinee March 27th edition once again goes all over the map for new music – geographically and in terms of genres. If you’re wondering why Wendy isn’t curating today’s mini-playlist, don’t be alarmed! She’s still with us, but she’s busy with post-SXSW preparations. O.k., off to the music that features artists representing nine countries.

We start off the mini-playlist with the debut single of a young man with a lot of buzz behind him. Meet Ali Horn, who has established a name for himself within Liverpool circles for his work with Strange Collective. Following in the footsteps of Mikal Cronin, Kevin Morby, and Steve Gunn, Horn is trying his hand as a solo artist. If his first single is any indication of what is to come, he’s going to have a very, very long career.

“Days Like Today” is neo-psychedelia extraordinaire. It starts off light and hazy like a hallucination coming to life. It then builds into a blistering middle section, as the reverb-drenched guitars and pounding rhythms create a zany kaleidoscope of sound. The adrenaline rush of free falling from the sky at 15,000 metres fills the air at this point before Horn opens the chute and gently guides us to the graceful ending. The only outcome that could result from this event is a permanent smile.

A friend and singer-songwriter of mine once told me that Germans have a serious infatuation with American folk, country, and roots singers. The country wasn’t only obsessed with David Hasselhof, but people adored Johnny Cash, Elliott Smith, Willie Nelson, Lucinda Williams, etc. Germany, as such, was brimming with talented artists, but they just didn’t have an avenue to be heard or discovered. One such artist is Babyalligator, a twentysomething year old singer-songwriter from Berlin.

Last week, she released her debut EP, Enigma, a four-track compilation of lo-fi, bedroom-pop / dream-folk songs. From it is the beautiful title track. “Enigma” comes out from the same introspective and immersive place as Elliott Smith’s iconic album, Figure 8. Babyalligator’s voice is soft and vulnerable, as she reflects back on a difficult time. The guitar work is gentle and serene, and the addition of the cello adds a haunting element. While the approach is minimalist, the song will leave a lasting impact, making you reflect on those moments where you felt weakest and hope was a distant wish.

Babyalligator’s debut EP can be picked up on Bandcamp (do leave a tip). She is a singer-songwriter to definitely watch.

There are certain types of music that we collectively gravitate towards. Psychedelic, blistering rockers, thoughtful folk ballads, and breathtaking, cinematic numbers are among our favorites. Another genre that always entices us is ’80s- and early-90s inspired songs that could belong on the soundtrack of a coming-of-age movie. There is no question that these songs make us nostalgic, but they also have an uncanny ability to make the listener feel multiple emotions. One such song that checks all these boxes is “Don’t Act Like a Stranger”, the brand new single by Cathedrals.

Following a successful trip to SXSW, which essentially ended the duo’s two-year hibernation, the duo of Brodie Jenkins and Johnny Hwin triumphantly announced their return with a bang. “Don’t Act Like a Stranger” is a gorgeous and stellar number. The music is mesmerizing and at points reaches euphoric and breathtaking levels (the guitar work, particularly the pace, is terrific). Jenkins’ vocals, meanwhile, are dazzling, where you just want to drown in every lyric and note she sings. The story could be for a modern-day version of Cinderella. Or maybe if Pretty Woman should be re-made, this could be its anthem, successfully replacing Roxette’s “It Must Have Been Love”. Excuse us as we step away to get even more nostalgic.

Is the Italian music scene undergoing a resurgence or have tastemakers like us ignored it too long? Might be a little bit of both, as Italy has been dominated by electronic and ’90s-inspired rock and pop music for some time. Over the past two years, however, bands and artists like Soviet Soviet and GUINGLA have made people take a longer look at what is being produced at the southern European country. Making us take greater interest in Italy is the arrival of Charlotte Cardinale.

At just 21-years old, the Rome-based singer-songwriter is a throwback, and we say this as a compliment. Her musical tastes range from Johnny Cash to David Bowie to Amy Winehouse to Pink Floyd, and her forthcoming debut album, Florescentia, promises to be rich of the music of the past. The lead single, “Dust & Tears”, from the LP gives us a hint of what is to come. It is part country-western, part soulful pop, and part Americana, and Cardinale has masterfully blended these different ingredients together. “Dust & Tears”, as such, has the smooth grittiness of Bonnie Raitt, the cinematic elements of Winehouse, and the raw storytelling of Ali Beletic. Calling this song impressive would be a massive understatement; it is really outstanding.

Not every song needs to be serious in order to be thought-provoking. Ariel Pink, Conan Mockasin, and Mac DeMarco have established successful careers by taking a light-hearted, often humorous approach. Falling in their footsteps are Milkpunch, the three-piece slacker-rock / garage-rock band based out of Sydney.

Milkpunch originally started off as a one-man band, the project of Brazilian born Rafael Lima and who have rocked our brains out with “Gemini” and “Butterflies in My Head”. This time around, he and his friends, Liam and Gush, have us laughing. “Dandelion Time” is a pretty great garage rock tune, but what makes the song is the lyrics. Raf shares a day in the life of a slacker who is extremely stoned. His day is spent sitting on curbs, imagining about the people in his life, and wishing for the unimaginable to happen (like “I regret not talking to those squirrels”). While the song is intended to be funny, it does make you think about what is truly valuable in this world and in one’s life. Maybe talking to squirrels isn’t such a bad thing.

One of the more remarkable, young talents to arrive on the indie scene in the past twelve months is Odina. Born in Barcelona but now based in London, the singer-songwriter has captivated listeners and tastemakers with her stunning, innocent vocals and intimate storytelling. We have also come to quickly learn that Odina’s maturity and style are well beyond her years, and this is all apparent on her new single.

“Why’d You Make Me Cry” is a beautiful, heartbreaking song. The tremolo guitar aches with every chord. Odina’s voice trembles with the pain of a person whose heart has been forever scarred. She is left with one question that so many have asked over and over again, “Why?” In one moment, two people are deeply in love, then in the next the relationship comes to an astonishing end. Odina may be just starting her career, but she’s not singing about fairy tales. She is sharing emotional moments with which everyone can empathize. We’ve said it before, Odina is on the verge of a massive breakout.

To find inspiration, sometimes one must look to the past and learn the lessons of our ancestors and build upon their successes. Then can something be pushed into the future. While not many artists and bands adopt this approach, the exceptions do eventually appear, such as Boston trio Radclyffe Hall. They are an electronic band, but not like the thousands that already exist. This is a band whose goal is to create cathartic music that haunts your mind, digs up those long-forgotten memories, and all the while making you dance.

Their latest single, “Run Run Run”, exemplifies their dark hypnosis. Elements of Massive Attack’s trip hop reverberate across the song, and it is brilliantly merged with Ladytron-esque indietronica. The beats are heavy, Dhy Berry’s vocals are like that of an enchantress, and the storyline is realistically eerie. “Run, run, run to the next life”, Berry sings, explaining that our past will eventually catch up to us unless we keep running. But is this a warning or a foretelling of what is to come? In this day and age, anything is possible.

When Anthony Gonzalez arrived on the scene in the early 2000s with his project M83, he introduced the world to the breathtaking, cosmic possibilities of electronic and ambient music. He wasn’t necessarily the godfather of this style or even genre, but he gave it meaning and made it accessible to the world. In the nearly fifteen years since, the ambience of electronica has slowly dissipated, as new producers take aim at the hugely popular EDM and electro-pop scenes. Even Gonzalez delved into the electro-pop realm on his last album.

Every once in a while, though, a new group emerges to remind us that there is still a place for music that makes us look towards and feel like we are in the cosmos. Safetalk is that group, and their debut single is a work of interstellar art. “Universal” is simply stunning and breathtaking, like viewing the Aurora Borealis in a perfectly cloudless and still night. Every element of the song is perfect. The production is sublime with every beat and note serving to heighten the exhilaration. The vocals are intoxicating, as they softly guide our eyes to look skyward. “Universal” is one of those songs that can truly be called an experience.

New Zealand is filled with hidden gems. Its landscape is dotted with gorges, rivers, and forests that seldomly have been explored. The quaint towns and cities have unexpected surprises behind every corner. Nothing in this fine country, however, can compare to the vast treasures that lie within its music scene. New Zealand musicians’ innovation and ingenuity rival those in Sweden, Norway, the UK, and Australia. As evidence, look no further than Secret Knives.

Secret Knives recently release an EP, My Capriccio. Its four songs are remakes of other tracks, where the Wellington-based artist has completely reinvented them. The highlight of the EP is arguably “My Arpeggio”. The song was originally released by The Mint Chicks, which was the first project of Unknown Mortal Orchestra’s Ruban Nielsen. Instead of a straightforward remix, Secret Knives has turned this song into an expedition. The song is multi-layered and complex, starting off with the trippy hypnosis of Massive Attack before ending with a crushing wave of guitar a la Jonny Greenwood during Radiohead’s My Iron Lung-to-Amnesiac days. As my friend and colleague Hollie described the song, “My Arpeggio” is breezy on top with plenty of pine forest depth as it develops, as if you’re falling from clouds into a thick canopy of trees. In other words, we agree this song is sensational.

Silver Knives’ EP is available for free on Bandcamp. He’s currently working on his new album, Snuff, and it is expected later in 2017. He will be opening for French for Rabbits on Saturday, April 1st. 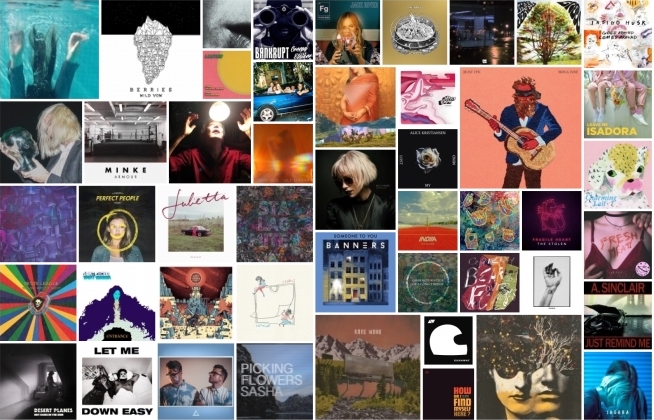