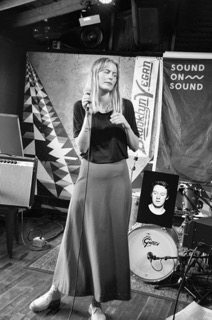 Since 2015, we have asked independent artists to share their favorite memories from their time at SXSW. In just a couple of years, this project has become one of most popular features thanks to the growing interests of bands and singers from around the world. Forty-five artists participated in this year’s edition, including Tuvaband.

Quietly, the Oslo-based duo of Tuva Hellum Marschhäuser (vocals/guitar/songwriter) and Simon Would (guitar/piano/keys) have developed a groundswell of support not just in Norway but around the world. And they’ve done this all themselves and in just a little over six months. Their pop-noir is chilling and icy, yet there is an air of the cinematic.

Unfortunately, Would was caught in the web of visa rejections and suspensions that gripped the US at the time, leaving Marschhäuser to go to Austin on her own while quickly working with friends, her manager, and everyone she could find to act as her support. Her memories are quite fascinating, showcasing her resolve, resilience, and adaptability. No wonder we love this band (and so should you).

Simon, half of Tuvaband, got his visa rejected two days before leaving. I had never sung in public without Simon and his guitar, and I’ve never played outside Oslo. Signe Eide, who was going to play some keys with us for the first time, had to learn how to play all of our songs the night before I was leaving. She was going to come down for our first official showcase.

On Day 1 of the tech conference, I had to sing three songs to playback tracks, which I couldn’t even hear over the speaker. Probably because the speakers were made for speeches!

Day 2, we had canceled our show for Radio Helsinki, but went there for an interview. Ten minutes before, my manager said he could play the guitar so that I could sing.

Day 3 for our first official showcase, Signe got delayed in New York because of a snow storm. Two days before the show, I found a professional keys player at an after-party. I also got to practice with a guitar player the same day. The whole show I had to improvise how to sing my lyrics, and there was even a song I didn’t recognize. It was a lot of fun!

Signe finally arrived for our next shows. Of course, there were more surprises later on, but I guess that’s part of playing SXSW with 2000 different bands and artists. Even though none of the shows sounded like they normally do without half of our duo, it was a really fun week. I think I’ve learned more in one week than I have the two years playing shows in Oslo. 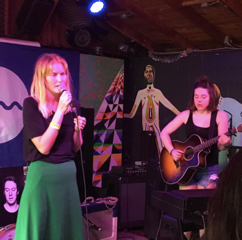