The Matinee April 25th is a humdinger of a playlist, featuring nine songs by artists representing five countries. There are some luxurious ballads, edgy rockers, quirky pop tunes. Sit back, relax, and enjoy the new music.

In every corner of the globe, a person is crying out in agony, as his heart has been broken and torn to shreds. Another is singing on a street corner, sharing her tears with anyone willing to collect them. But for those of us who could barely strum a single guitar chord, Seattle newcomers Antonioni have just the song for us in which we can wallow our sorrows.

“Love Is A Landmark” is that tune. From the emotive wail of frontwoman Sarah Pasillas’ vocals to the reverb-drenched guitars, the song echoes the captivating brilliance of Angel Olsen and the gritty, alt-folk of Big Thief. This song, however, isn’t just about heartbreak in the sense of two people going their separate ways. Pasillas also guides us through the pain of losing someone dear. Love, after all, extends beyond intimacy, and it is a landmark that surrounds us everyday. Whether we choose to approach it again is the question, and when we do Antonioni will be waiting on the corner singing this tune. Or they’ll be spinning songs from their debut EP, Lullablaze, which is out now via Seattle boutique label Den Tapes.

There are bands that just rock out and abide by the slogan, “Hear me roar!” Unfortunately, there is only noise but little substance. Then you come across a band like Atlas Wynd, who are just doing their thing but you really want to hear them roar. Fortunately, they deliver in spades.

Their new single, “Mona Lisa”, is an explosive epic. However, it’s not your typical garage-rock number that is just one unrelenting mass of energy. Instead, the duo of Peter Chapman (vocals/guitar) and Harry Sotnick (drums) have created a suspenseful number. The song begins with subtly with a blues-rock riff that you will leave you shaking in your boots. Then the first shot is fired, and the wall of crushing guitar and pounding drums overwhelms you. Calm returns before the next foray is released. This continues two more times until the finale arrives, at which time a blaze of sonic bullets has riddled our soul. By the end of the ferocity, all that you can do is beg for more.

Before you hit play to this next song, grab a bag of popcorn because Automatic Fiction have delivered a song that is beyond the cinematic. Akin to the cosmic worlds of M83’s early beginning to the mythical soundscapes that have made The Ghost of Helags one of Central Europe’s fastest-rising duo, “The Gold of Days” is an experience that very few can match.

The initial wave of digital beats and stuttering percussion creates the hypnotic tone before the guitar and synth come in to take over our minds. When Lise Data’s voice comes in, lift commences, and we are transported into another dimension that can only be envisioned within the wildest imagination. Despite the initial feeling of being lost, we quickly realize this world is dazzling. It may not be real, but this is a place we never want to leave. Such raw, edgy beauty is so rare that one must cherish every second of its five minutes. Here’s hoping more people will get to experience Automatic Fiction’s interstellar and psychological journeys.

Back in June 2015, The Matinee did not exist. Instead, we just had the Weekend Showcase, which was a short playlist compared to what it is today. At that time, we were introduced to Wellington collective The Glass Vaults, who opened our minds to a whole different side of New Zealand’s music scene with “Sacred Heart”. In the nearly two years that have passed, the quintet have evolved into one of the country’s most innovative bands, catching the attention of music fans and labels around the world.

On May 12th, their new album, The New Happy, will be released by Manchester-based label Melodic Records (pre-orders available here). It should result in the band reaching more fans and new level of popularity, especially if their latest song is indicative of what is to come. Similar to their previous single, “Brooklyn”, “Bleached Blonde” is a catchy, catch-all number. The song never gets too high, but never too low. Despite its controlled nature, the song is incredibly captivating, grabbing your attention from the first note to the very last. Its surprising effect can be attributed to Glass Vaults’ David Byrne-like brilliance. Funk, psychedelic, alt-pop, disco, new wave, and synth-pop, “Bleached Blonde” is a brilliant mosaic of sound and influences. Such a mixture shouldn’t work, but then again Glass Vaults aren’t an ordinary band – these guys are musical geniuses. Now everyone else needs to get on their bandwagon.

RIYL: The Jezebels, HAERTS, The Kills

One of the great trends that emerged in the late ‘80s / early ‘90s was the rise of anthemic, cinematic music – songs which you could get easily lost in and daydream (and we’re not talking about Kenny Loggins’ “Danger Zone”). We could pretend for a moment we were someone else or envision a series of events unfolding that would allow us to be the hero or fall in love with someone. Recapturing this era are Essx Station, a brand new duo out of Los Angeles.

While very little is known about the group, we have an inkling that they are seasoned musicians who have dabbled in film and television because their debut single, “Can’t Go Back”, is made for both the big and little screens. The duo female-male vocal approach is straight out of the ‘80s and done masterfully, as the harmonies are perfect and the interplay is clever to offer the dual perspectives of a life together. The soaring synths and the pulsating rhythm section add to the song’s drama, leading us down a road that has not destination. Instead, we just need to enjoy the ride all the way to Essx Station.

As spring turns into summer, the planning for long road trips commences. This is the time of year to explore vast, unexplored territory. A year ago, the then 23-year old singer-songwriter Mogli did just this. Along with her partner, filmmaker Felix Starck, they converted a school bus into a trailer and explored North America. From the remote, glacial confines of Alaska and the Yukon Territory to the jungles of Mexico, they traveled to be inspired. For Mogli, the experience resulted in the writing and eventual release of her sophomore album, Wanderer.

The lead single is “Holes”, which feels like an endless journey that leads us home. The arrangements are quaint and simple, yet intimate and warm. Mogli’s vocals are absolutely stunning, radiating with the warmth of a desert breeze blowing through your hair as you travel down an unknown highway. And such times offer plenty of moments of self-reflection, which Mogli does on this song. The song is introspective, as she reveals the emptiness in her life and how she is left “picking up the pieces”. The songwriting is beautiful, and “Road Holes” in its entirety is a remarkable introduction to one of Germany’s most promising artists.

Wanderer will be available everywhere on May 5th.

RIYL: The Pains of Being at Pure of Heart, A Sunny Day in Glasgow, Slowdive

How is possible for a band to have an album and one EP under its belt but remain a hidden gem, especially when they make such scintillating dream-pop like The Oyster Murders do? Yet this quartet out of Brisbane, who are led by the husband-wife duo of Grant and Wendy Redgen, are still trying to breakthrough even despite Triple J coverage. It’s only a matter time, though before people realize their stupendousness (like us!).

Their latest single, “Eliza Battle”, is a dazzling example of intoxicating delirium. It is one part mind-blowing shoegaze and another part shimmering synth-pop, where the piercing guitars and humming synths come beautifully together to create a trippy yet dreamy soundscape. The soaring harmonies further heighten the song’s cinematic aura, causing you to feel like you are ascending quickly into the clouds. Or maybe you’ll want to stay ground and dance emphatically to this wonderful song.

The Oyster Murders are Grant Redgen (guitar/lead vocals), Shaun Edwards (drums), Chris MacPherson (bass/guitar), and Wendy Redgen (synths/vocals). They are currently working on their sophomore album, which should be released late 2017.

Leon van Dijk. Pelorus. These four words you won’t forget because the new single by the New Zealander is beyond description. Seriously, this song is indescribable. To understand it, one must not simply listen but experience every element, note, and vocal. In order to do that, you must close your eyes and immerse yourself in all that you hear. In doing so, your soul and mind will achieve levitation, which only a few artists can do and they go by the names Bon Iver / Justin Vernon, Rhye, and Volcano Choir. Yes, we just said it – van Dijk has the potential to be the next master of the meditative dream-folk and ambient cinematic indie scenes. To think, he’s only 20-years old.

“Alive” is the lead single from Pelorus’ forthcoming, debut EP, Perfect Storm. It is expected later this year.

When Amy Winehouse exploded on the scene, she gave life to a classic genre that was slowly pushed to the underground. Now soul music has returned to the mainstream, although it’s been reinvented with varying degrees of success. But one woman who is recapturing Winehouse’s spirit – both in music and style – is Red Rosamond.

The last time we heard from the Los Angeles-based artist, she had created a song that was perfect for a James Bond movie. This time around, she has crafted a groovy yet edgy number that will get even the most stoic body moving on the dance floor. But don’t mistaken the infectious nature of the song as a feel-good, low-substance song. Nope, she has written a song that is not solely about a broken heart, but also a condemnation of a person with neglectful heart. Every husband and fiancé should listen to this and take heed of Rosamond’s message. I’m sure this future star would agree. 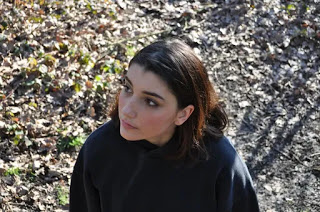