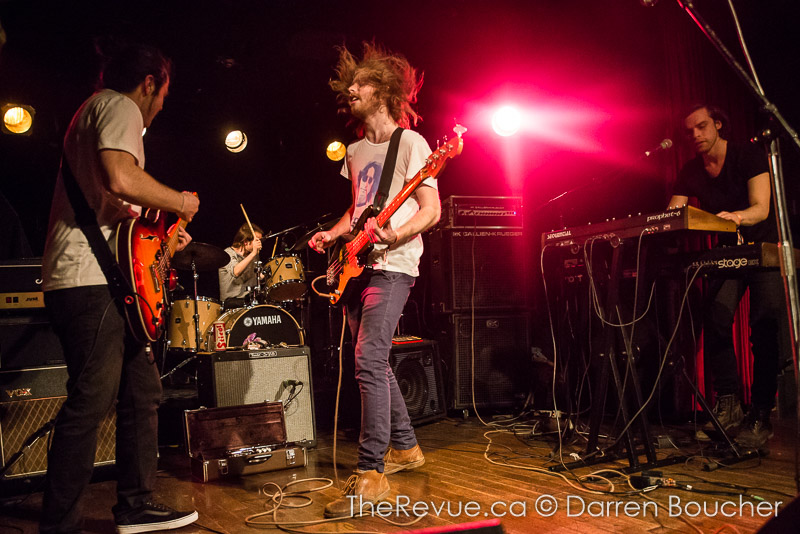 Toronto’s massive Canadian Music Week festival has wrapped up for another year and if you took in all it had to offer, you’re likely still catching up on your sleep. With over 60 venues and approximately 1000 artists, choices for how to spend an evening were almost endless. Our Part I of Canadian Music Week is a photographic revisiting of some of the highlights of the first two nights of the festival.

Tuesday kicked off with a 4-band bang at The Mod Club. The Kents began the evening with a dose of indie pop, followed by Bleeker who gave a very energetic performance, enticing the crowd to sing along. Toronto was well represented with both Modern Space and The Dead Projectionists delivering solid sets and closing the evening of Canadian talent.

The Phoenix Concert Theatre hosted the 17th Annual Independent Music Awards on April 19th. Presented by Jim Beam and Indie 88, the part-performance/part-award show shone with a plethora of artists, some of which had been award recipients. The night kicked off with The Nursery, the winners of the Jim Beam Make History Talent Search, followed by Pop Group of the Year winners Repartee. Other artists included Dan Mangan, recipient of the Make History Award, who gave an acoustic performance, and Indies Hall of Fame inductees 54-40, who riled up the audience. Sets by The Wooden Sky and Hollerado rounded out the evening and made for a great music-filled night.

Elsewhere in the city, some of the artists we had previewed the week earlier were performing. One of Dina’s picks, Zoe Sky Jordan gave a wonderful performance at the intimate Nocturne. She was followed by Nashlyn, who will be releasing her debut EP next month.

A quick club hop was made to catch one of Darren’s picks playing Revival. Wolkoff’s wonderfully catchy songs sounded just as great live and the band played with complete confidence. They were followed by the Toronto-based band Liteyears, who gave a spirited performance. Next up was the Lost Cousins, who really got things jumping at Revival. The audience was drawn in, crowding the stage for the enthusiastic set. Finally, a late night stop at The Painted Lady allowed us to catch the wonderfully unusual Ghost Twin. The band’s profile on the CMW site described their genre as “dirty bass synth sleaze industrial baroque gloom pop”. This was the perfect ending to the night.