Louis Barabbas, whose band The Bedlam Six released their swansong album Down Down Down back in 2016, combines his love of the classics with attention to contemporary political intrigue to create an epic, 31-track, feminist-oriented, double album. How else could a musician of Louis’s calibre express his art than through the medium of musical theatre? Jocasta: A Musical Tragedy is both a complete orchestration and a work in progress as Louis and his soundtrack seek full theatrical production. And, if it ever gets made (and please let it get made!), it promises to be quite a show.

Louis has drawn together a quirky ensemble of talent to breathe life into his story. Featuring Bridie Jackson (whose vocal expression is exquisite in any genre), Ríoghnach Connolly (Honeyfeet, The Breath, Afro Celt Soundsystem), Felix Hagan, Liz Green, Tom Hingley (Inspiral Carpets), the legendary Tom Robinson, Jami Reid-Quarrell (BBC’s Doctor Who, Class, Red Dwarf), Natasha Hodgson (Kill The Beast), and many more, including – of course – Louis Barabbas himself – the album can’t fail to impress through sheer depth of creative force.

Set in the murky world of political power games, media manipulation and familial betrayal – which is about as contemporary as it gets – Louis explains how he brought an age-old story into the 21st century:

The plot is based loosely on the myth of Oedipus (the most tragic of all the classical tragedies). This story has been told many times, yet the mother Jocasta is always reduced to a supporting role, a narrative device rather than a force in her own right. The more I thought about a modern treatment for the story the more I wanted to make her the lead character

Opening with moody brass before fleeing into full orchestration, the “Overture” sets a tone for the piece; balletic, folky and romantic. The tragedy to come is kept secret for a second, until Rioghnach Connolly’s “Welcome To The Upside Down” alerts us that all may not be as expected. Husky, jazzy and knowing, she is a narrator who misses nothing and tells it like it is. We definitely want to hear more from this character.

Liz Green and Natasha Hodgson bring a touch of vaudeville to “Every Tragedy Begins With A Happy Ending”. Yes, you did read that right. This is Louis presenting his witty credentials early on. We don’t stay happy for long. Jami Reid Quarrell breathes malice into “Hate”, reminding us that strong emotion is open to manipulation “what is power if you can’t abuse it?”

Contrast is the lifeblood of musical theatre, so Bridie Jackson’s rendition of “Lullaby” lifts and sways us into times of innocence before we are dropped into the world of “A Good Day To Bury Bad News”. Louis Barabbas showcases his diction and diaphragmatic control through two and a half minutes of speed-jazz. Crying out for a tap routine, this is song and dance for the spin generation.

Changing the mood and the language, we’re taken to Cabaret – if it had been set in Paris rather than Berlin. “Where Is The Romance” is a pastiche of a song, but carried off with aplomb by Laurien Schreuder. Bang up to date again, there’s no mistaking the working class ambition in Mark McGhee and Elizabeth Lewis Williams’ duet “How Do You Know”. And yes, it deserves to be staged with a chorus line of urban dance.

Taking the role of protagonist at the moment of change, Felix Hagan fights his fate through the “I want” song of the story, “Is This It For Me?”, mirrored in succession by “I Will Howl”, which delivered with masterful emotion by Bridie Jackson.

Every musical needs an anthem. Ensemble-piece “Before You Disperse” mixes folk-pop rhythms with good old fashioned protest. There’s hope in them there lyrics; “who says we can’t win because I think we just might” could be a soundbite for underdogs everywhere. And yes, we all want to be a part of something.

Natasha Hodgson and Bridie Jackson move the story forward with insights into fate and consequence in “Time Passes (everything else fails)”. Clocks tick, voices scream and life goes by “we only survive as long as blind chance spares us”. Is the passage of time playing into Jocasta’s hands? “Jocasta Regina”, from Ian Bermingham, is reminiscent of Evita‘s “Oh What A Circus’ with Tango rhythms and stories of unrealised potential – “she was the hottest thing since Joan of Arc”. Becca Williams follows on with her take on changing times in country-flavoured “How Long Can This Go On?” Do we see a chorus of cowboys and a gingham-clad routine from Seven Brides for Seven Brothers?

Closing the first half with a comedic call to the wine bar, Tom Hingley offers us the “Same Again”. Time for an intermission – bourgeois snacks and champagne anyone? This might be the moment when our choice of interval drinks work out which side we’re on. Which is handy, since the ensemble is about to open Act 2 with the call to arms “It’s Time To Take Sides”. Our characters assume their positions as Rioghnach Connolly, Felix Hagan and Louis Barabbas join together to remind us “It’s a Cruel World”, transitioning into Bridie Jackson’s blues-based memory of Lullaby, but this time with “No Baby To Lull”. If we were in any doubt that there is tragedy for some, interlude “Death Is What Happens To Other People” turns the tables, transitioning into Bridie Jackson, seething and angry but “Keeping It Together”.

Reinventing the truth is the stuff of politics and history, so Jami Reid Quarrell and Louis Barabbas, clever and sly, redefine a back story in “A Special Kind Of Ordinary”. Transition comes through Bridie Jackson’s soul ballad “Take Me Now”. Just in case we’re tempted to relax into pop, it’s arranged with a surprise in the mid-section, reminding us that this is finely drawn dramatic story-telling. And adding an alternative viewpoint. Natasha Hodgson brings on the brass with a touch of oom-pa on “If That’s What You Call Progress”.

Every musical has it’s antagonist, and Louis Barabbas plays the part to perfection in “Pulling The Strings”. Psychopathic tendencies aside, this is a joyous moment of jazz, celebrating the fun to be had through revenge. Served cold? No, served with a substantial slice of cheese and an ear-to-ear grin. Now that’s what I call scary. So it’s just as well that Liz Green waltzes us into a merrier mood. “There’s Enough Loneliness To Go Round” is a drinking song to convenient friendship and – lets face it – quite a few relationships. “Only be lonely with me and I will be lonely with you”, says it all, delivered with honky-tonk piano and a smidgen of tuba to keep it from being too real.

We’re all familiar with the apocryphal curse “may you live in interesting times”. Richard Barry expresses the ironic evil inherent to the phrase in “Interesting Times” where profit and it’s trader henchmen set the price for everything – and it’s not a pretty penny “pay them sway them, or enslave them, do it all from a tax haven”. This isn’t the first time that bankers have made a salutary appearance in a musical. Fans of Mary Poppins will recall Dick Van Dyke’s slightly sinister Mr. Dawes, senior partner of the Fidelity Fiduciary Bank. That was all before the days of offshore hedge funds, but even they had a run on their deposits.

Time for a rock ballad? Bring on Bridie Jackson with “No Fear”. Solid enough to stand alone, but carrying the plot forward as she steps into the spotlight, defying a demand to disappear. And wouldn’t you guess, this is the moment when things start to unravel, courtesy of media and fake/real news. “Scandal”, performed by Louis and the ensemble, exposes the incest at the heart of the Oedipus story. What’s spoken can’t be taken back, so the only solution is to “Lock The Doors”, delivered with despair by Bridie Jackson.

Drawing the drama to a close, Becca Williams reprises “Before You Disperse” with the angst of experience burnt hard into the soul. Finally, the cast remind us that, however much we have we can’t take it with us. “There Ain’t No Pockets In A Shroud” is Louis Barabbas at his cheeky, political best. Sure to leave the audience singing along as they leave the theatre, let’s hope the underlying message stays a bit longer and rests a bit deeper.

Musical theatre has a tradition of addressing difficult subjects, whether it’s Rogers and Hammerstein’s take on domestic abuse in Carousel, inter-cultural relationships in West Side Story or the many contemporary portrayals of difference (Fun Home, Dear Evan Hansen, Hedwig and the Angry Inch), the musical stage provides a safe space. Sometimes a little too safe, as the pull towards a happy ending can overwhelm the message. Serious, political theatre tends not to make it onto Broadway, unless it’s teeth are drawn to avoid offence. Jocasta defies the glittery stereotype and dares to take sides. As Louis Barabbas explains, “The music is energetic and the characters exuberant, yet this is far from a happy tale”. It will be interesting to see whether the raw unpleasantness of human nature that Louis places on the doorstep of political elites will survive development into a bankable production.

The soundtrack double album of Jocasta: A Musical Tragedy is released on 5th May via Debt Records. Get your copy and read much, much more about the origination and execution of this work (including insight into getting funding from the Arts Council) here.

Louis Barabbas will be touring the record throughout April, May and June in the UK and Ireland. For more information follow Louis on: 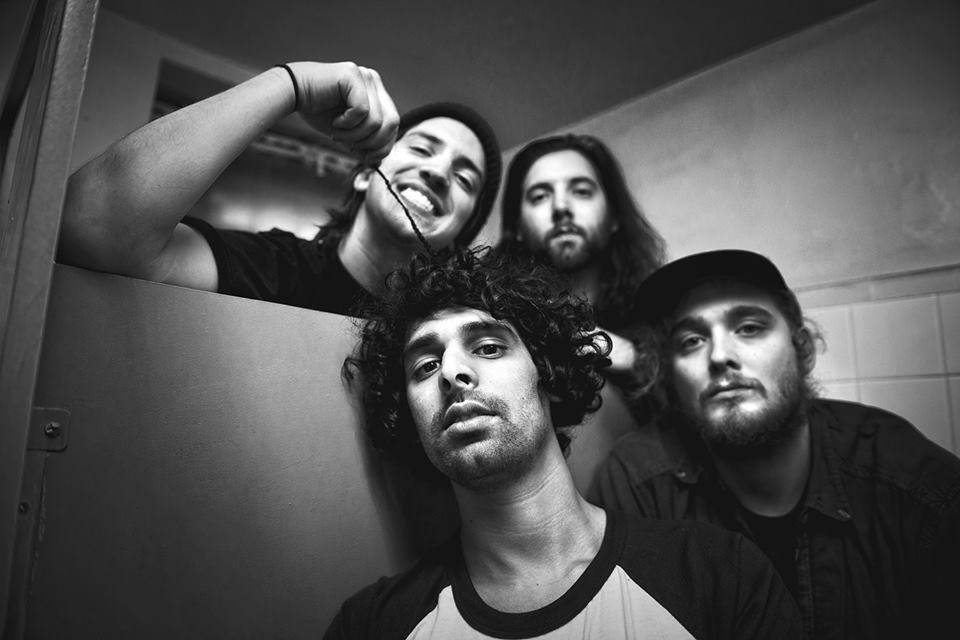