We’re circling the globe once again to provide you with new music on The Matinee June 29th edition. Eight countries (nine if you count one artist representing two nations) are represented. The one country represented twice is not the USA. Easy hint: the mini-playlist is bookend by artists from Down Under.

Everyone daydreams about having a second persona. Whether as a double agent, a movie star, or the person who finds a cure for cancer, we all wonder what life would be like as someone else. Alex Cameron has many lives (no, he’s not schizophrenic nor has multiple-personality disorder). When he’s not performing with George Nicholas and John Hassell as electronica group Seekae, he is moonlighting as a solo artist. And yes, moonlighting is the correct term because Cameron has adopted the persona of a failed musician. Of course, Cameron is anything but a failure.

His debut album, Jumping the Shark, achieved cult status four years ago even before Secretly Canadian signed him and re-issued the album. It was one of the great LPs of 2013. It is, therefore, not surprising that the internet exploded when news broke yesterday that his sophomore LP is on the horizon. The excitement is well deserved because the first single is tremendous.

“Candy May” is a pop-rock ballad straight out of the ’80s. Cameron’s crooning vocals grab your attention immediately while the stuttering percussion, the slight hum of the synths, and the tickling keys keep you enthralled. His songwriting is fabulous, as he shares another day in the life of this failed musician and a failed relationship with Candy May. Despite the despair in the lyrics, the groovy finish that is heightened by the saxophone will leave you smiling.

One last tidbit: Angel Olsen sings backup on the track, and she will also be on the duet “Stranger’s Kiss.”

The cinematic video for the song worth watching and is available here.

In every corner of the planet, there is an artist waiting to be discovered – someone who resides outside the usual hotbeds where we tend to find our music. In the case of Baiba Dekena, she has taken the long road from her humble beginnings in the port city of Liepāja, Latvia, to be heard internationally. After listening to her new single, “Light Inside,” you’ll be asking the same question as us: “How have I not heard of her before?”

“Light Inside” exemplifies how music can be the most intimate experience on the planet. Dekena’s vocals are rich and intoxicating, where you hang onto every word she sings and wish she was next to you. The guitar arrangements are familiar, aided by the stirring production that together creates a haunting soundscape. Dazzlingly breathtaking is this song, and it is also a wonderful introduction to a hidden gem.

“Light Inside” is the second single from Dekena’s forthcoming new album, These Storms. It’ll be released later this year.

A year ago, Madrid dreamgazers Baywaves released their impressive debut EP. The gem of the EP was “Marsupilami,” which was disco/psych-pop heaven. This time around, however, they’ve targeted a different environment without compromising their infectious sound.

Before hitting play on “Gliss,” grab your surfboards, beach towels, and sunscreen first, because Baywaves are taking us to the coast with this shimmering track. The jangly guitar notes are swimmingly delirious, and they would make even surf-pop giants Beach Fossils envious. The groovy rhythms are hip-shakingly addictive while the harmonies are as warm as a midsummer’s sunny day. What did we tell you? This is the ideal summer song, one that leaves you grooving, smiling, and enjoying life.

Baywaves will be performing at The Waiting Room in London on July 6th. Entry is free, so go check them out!

Pizza, pasta, and panini – the three “P’s” of Italy that I won’t forget from traveling there. It’s never been a place that has crossed my mind as a mecca of indie music, but that’s quickly changing. This week alone, we’ve premiered songs and videos by two Italian artists – Feexer and Alessandro Ciminata. Another band we would love to have the opportunity to premiere their work are FREEZ, who are demonstrating that Italian music is more than just opera, electronic, and pop music.

The quartet from the town of Schio, which is in the Dolomites region and about an hour west of Venice, sounds like they were born and bred in California because their garage rock/pop vibe is straight out of Oakland, San Francisco, and Long Beach. If blindly listening to their latest single, “Bad Weed” would sound like a tune right of The Growlers’ lengthy discography, particularly Hot Tropics.

The fuzzy guitars, the echoing bass line, the rhythmic percussion, and the hazy vocals are all akin to the great garage-rock bands. Even the subject matter and lyrics (that focus on the dilemmas faced by today’s youth) are similar to what The Growlers have been singing about for a decade. Most importantly, though, “Bad Weed” is a fun and amusing song, even if frontman Michele Bellinaso says he’s “so sad and looking for a new girl.” We’ll just have to be amused at his expense.

The single is out now on FatCat Records. It is also from FREEZ’s second EP, Routine, which can be picked up on Bandcamp.

One of the most exciting new bands we’ve come across this year is unquestionably Jesus On Heroine. Two months ago, they blew our minds with “Musasabi,” which was a monumental, psychedelic experience. It is also a candidate for song of the year, but the same argument could be made for their latest single.

If you’ve bathed under a waterfall, you will know the exhilaration that overcomes you as the refreshing stream splashes on your head while the warm sun beams on your body. This same sensation is experienced on “Ardhanarishvara.” There isn’t a single element that stands out, but instead the psychedelic guitars, the dabbling of the ivory keys, the throbbing bass line, and the stuttering drums cascade together like a refreshing wave of sound. The harmonies are majestic, bursting like a congregation worshiping its gods. “Ardhanarishvara” is another tremendous tune from a band that we will start worshiping as of today.

For what it’s worth, Ardhanarishvara is the androgynous form of the Hindu god Shiva and his consort, Parvati, so maybe we are chanting to a god. If you are interested, the video for the song is a must-see for its eye-popping animation.

RIYL: The Runaways, The Bangles, The Regrettes,

Mise en Scene is a term used to describe props on a stage or in a movie, including the sets and landscape. But for the Winnipeg-based trio, they’re quickly emerging from the background to the forefront of the Canadian music scene. For instance, Paste Magazine and CBC Music have been praising Mise en Scene’s forthcoming new album, Still Life On Fire. The latter, in particular, listed it as one of the albums to hear this summer. While we have to wait another day for the LP’s release, the single, “Waster,” offers a sampling of the band’s potential.

“Waster” is an anthemic, punk-pop number that is simultaneously edgy yet dreamy. The music is classic pop-rock, reminiscent of The Runaways’ style back in the ’70s with its addictive melodies and body-swaying rhythms and guitar riffs. Frontwoman Stefanie Blondal Johnson’s vocals, though, are intoxicating and alluring, giving the song its unexpected shimmering quality. But don’t let her voice fool you – she’s telling us that she’s had enough of the time wasters who only want to receive attention but are never willing to give it back. This song, though, is well worth investing the less than three minutes then hitting repeat a few more times. If the LP builds upon this song, Mise en Scene could be the country’s biggest breakout band of the year.

Earlier this month, She Keeps Bees came out of their three-year hibernation and delivered one of the fiercest political songs of the year with “Head of Steak.” We should have realized at the time that the state of the affairs in the U.S. would see the band write more new music as they have never shied away from expressing their voice and standing up for what they believe is right and humane.

Their newest single, “Our Bodies,” is another ear-popping, poignant number. With Jessica Larrabee’s trademark reverb-drenched guitar and Andy LaPlant’s patient but cathartic drumming, She Keeps Bees lulls us into a false state of relaxation with the song’s initial tempered pace. However, it turns into a snarl as the intensity builds and slowly burns to its edgy finish. “Our Bodies” is the song of a people who see healthcare as essential. It is the call against those who see healthcare as a luxury and a private commodity rather than a basic human right.

Basic right
We must defend
Choose whether and when
Without being demonized.

Cause what control
Can we have with no control
Her bodies know
Need no chaperone.

“Our Bodies” and “Head of Steak” will be released together as an EP, which arrives next month via German label BB*Island.

New Zealand is the one country that embraces the whimsical and the quirky. For that matter, Kiwis encourage their artists to step outside the box and create music that not only entertains but amuses. It has been this way since the emergence of the Dunedin sound in the early ’80s and, of course, the popularity of The Flight of the Conchords. Another band taking the weird-but-wonderful to new levels are Soaked Oats, who just so happen to be from Dunedin.

One of their latest singles, “Avocado Aficionado,” is a perfect illustration of their creative brilliance. Musically, the song is founded in the classic rock sounds of the Rolling Stones but with a modern touch (think Foxygen). The funky bass line, the jangly guitar riffs, and the jazzy drumming create a groovy vibe. The lyrics, though, are something else. Funny, unpretentious, and out-of-the-ordinary, the band tells the story about the perfect avocado. This sounds ridiculous, but it actually is humorous and brilliant.

Awesome. And yes, Kiwis love their avocados, especially since they are available year-round!

“Avocado Aficionado” is taken from the band’s equally quirky concept EP, Stone Fruit Melodies, which is available on Bandcamp. The record contains songs about “Apricot Jam”, a peach, and a plum. Brilliant!

Oh. My. Gosh! Those were the three words when accidentally coming across “Alone,” one of the seven songs from Adelaide quintet Workforce‘s latest EP. You, too, might be uttering these same words or other superlatives when hearing this spectacular song.

Reminiscent of the cinematic Americana of Phosphorescent and the lush shadow folk of Widowspeak, “Alone” will make you stop what you’re doing as it completely absorbs your mind. The instrumentation is spectacular with each element working in unison to create a soundscape that is breathtaking and transfixing. The whispery, angelic vocals are enrapturing, possessing the same awe-inspiring hypnotism of Widowspeak’s Molly Hamilton. Amazing. “Alone” is easily a candidate to be on our year-end mega playlist of our favorite songs. Why didn’t we discover this band earlier?

No Sun is out now via Tenth Court. Get it on Bandcamp. (We’ll have to do a review of it because it’s sensational). 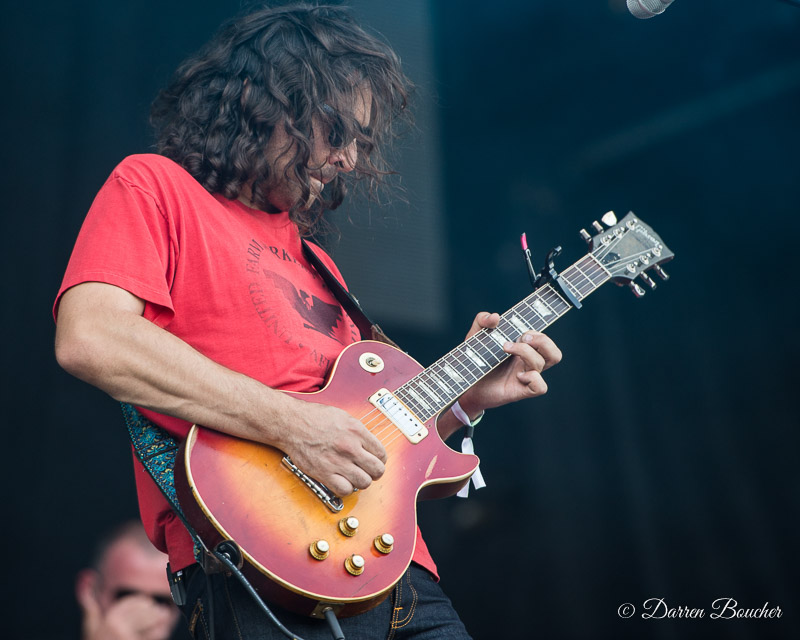