The weekend playlist known as the Saturday Sampler September 16th edition rocks, rolls, and dives deep into the new music sea. This international affair includes nine new singles from Australia, Canada, England, Scotland, Sweden, and the USA. We kick things off with weekend-appropriate dance tunes from one of Australia’s most beloved synth-pop bands. Check back tomorrow when our Weekend Showcase features all of the new music we have shared this week, including seven album reviews, five days of festival coverage, and six mini-playlists!

Cut Copy – “Standing In The Middle Of The Field” (Melbourne, Australia)

Four. Long. Years. That’s how long the world has been waiting for Cut Copy to deliver a follow-up to their last album, Free Your Mind. Next Friday that wait ends, but at least we have the album’s newest single to keep us dancing until then. “Black Rainbows” is the more danceable counterpart to the LP’s first offering (“Standing in the Middle of the Field”) as it has the increased energy of the fifth track, “Airborne.”

Every second of this four-plus minute track is a euphoric rush of synth-driven dance-pop perfection. “Turn up the volume all the way it goes,” sings frontman Dan Whitford about a third of the way through. No worries there, mate. We plan to test the limits of our speakers with this one; to do otherwise would be a crime against music.

This single is available now via iTunes while Haiku From Zero arrives September 22 from Astralwerks. Pre-order and streaming links are available here.

The band kicks off their two-month North American tour October 1 in California.

RIYL: The Smashing Pumpkins, The Jesus and Mary Chain, Slowdive

British indie rock outfit Honey Lung have quite a Midas Touch when it comes to music. Everything they create tends to elevate the minds of listeners who then feel like they’ve struck gold when they hear a new single. This is an impressive feat for an emerging band, but we can say with confidence that this group deserves the praise. They wowed us back in May when we shared their “Sophomore” single. That tune was more of a scorcher whereas “Stuttering Mind” is lush and expansive.

If you’re a fan of dynamic shoegaze that dives deep below the surface to explore every possible hidden nuance in a song, then Honey Lung are your new musical obsession. This isn’t pure shoegaze that puts you in a stare-at-the-floor kind of stupor. Instead, what you find on “Stuttering Mind” is a mind-blowing soundscape that is rich, dense, and mesmerizing. What starts as an unassuming ballad that evokes late ’90s Smashing Pumpkins then evolves into a stunning epic that rivals the intensity of rock titans like Ride and Slowdive. The crescendo just past the two-minute mark will make your jaw drop. It’s simply brilliant.

“Stuttering Mind” will be released September 29.

You know you’re dealing with fierceness incarnate when you hear “I’m a fucking riot most of the time and I know” on the new Honeyblood single, “Sea Hearts.” While you might expect that attitude to come from American riot grrrls in the ’90s, it’s actually the handiwork of Glasgow’s Stina Tweeddale and Cat Myers. Despite their obvious retro influences, Honeyblood are out to prove that not everything coming out of Scotland is introspective folk or twee pop. No, these two rock just as hard as the trailblazing women who came before them, namely Liz Phair, Kristin Hersh, Tonya Donelly, and the Deal sisters.

Since forming five years ago, the duo have been honing their sound with gigs ranging from small bars to well-known festivals like T in the Park and SWSX in Texas. From the tight hooks and snarling guitar work on “Sea Hearts,” it’s obvious why they were chosen to open for the likes of Courtney Barnett and Foo Fighters. Honeyblood are future Glastonbury Pyramid Stage headliners, just you wait.

Their sophomore album, Babes Never Die, has been out almost a full year now, so the arrival of this new tune comes just in time. “Swell Love” is out now and available for purchase via iTunes.

The song is available on FatCat Records.

Josiah and the Bonnevilles – “Lie With Me” (Los Angeles via Morristown, TN, USA)

We must have been living under a rock for the past month because Josiah and the Bonnevilles released a new song at the end of August and we completely missed it. Fortunately, we get a second chance, and we’re not whiffing on “Lie With Me” (although we’re a week late).

With the rollicking intimacy of Kristian Matsson (The Tallest Man on Earth) and the vivid storytelling of MC Taylor (Hiss Golden Messenger), Josiah Leming has delivered a song that can only be described as Americana gold! The opening notes of the harmonica immediately inform you that this song will be a classic, old-school, southern tune. The strum of the acoustic guitar and the percolating percussion also harken to a time when John Prine and Lucinda Williams were the stars of the scene. Leming’s vocals and lyrics, too, are reminiscent of an era when songs doubled as fantastic stories. In this case, he tells a heartbreaking story of how one’s addiction and maltreatment not only led to his fall but also ended the perfect love affair.

“I’m sorry that your love is not enough
Sorry if these chains are too tight
I’m sorry I can’t say the words right
But if you lie with me
I can make you stay.
I can wake you from this bad drea
And our love can die another day.”

The song is taken from the band’s forthcoming new album, On Trial, which arrives later this year via Vagrant Records.

Linn Koch-Emmery – “Under the Sun” (Stockholm via Norrköping, Sweden)

“The future is women” has been a popular slogan used for the past 18 months. When it comes to indie rock, women are the future. We’ve been saying this for a while. There is no shortage of great female artists creating head-pounding, innovative rock ‘n roll.  The usual suspects populate most lists – Wolf Alice, Angel Olsen, Waxahatchee, TORRES, St. Vincent, Warpaint, Girlpool. Better add Linn Koch-Emmery to the list.

The 25-year-old native of Norrköping first drove us bananas with the immensely addictive “Forever Sounds”. She’s back with another sweet single that will make you an immediate fan, or, if you’re like us, “Under the Sun” will cement your affection for her. The song demonstrates Koch-Emmery’s ability to create catchy, fuzzy guitar riffs coupled with delirious melodies that you will have you spinning like a tornado. Listen closely and you might catch a bit of Joan Jett in her sound and style. Her songwriting, too, are akin to the rock legend, as she’s not the type to crawl on her hands and knees and beg for someone to come back to hear. Quite the opposite, it’ll be the other person begging for forgiveness. And us? Well, we’re just on our hands and knees worshipping this future rock goddess.

The song is taken from her forthcoming debut EP, Boys, which arrives October 20th via Welfare Sounds & Records. 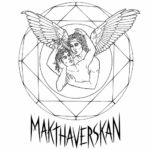 If you’re expecting a song titled “Eden” to be a peaceful, bucolic affair, then think again. Swedish pop-punk rockers Makthaverskan bring the relentless energy of their “In My Dreams” single that we shared last month but with an ethereal twist. With soaring melodies and driving percussion, this song pairs  philosophical lyrics with elements of dream pop and post-punk. The result is a soul-stirring anthem you will want to belt out at the top of your lungs.

The yearning in frontwoman Maja Milner’s vocals will leave you feeling awed and inspired as she sings:

“We build it all just to watch it fall
We build barricades, there’s so much hate
Humanity equals misery
There’s nothing here to see

Is this what we want or is it all we know?
And I don’t have trust in society
When it won’t trust me.”

Look out world and make way for Mattiel Brown – or simply Mattiel – because she’ll be entering your homes in one way or another. She’s a designer and an illustrator with a pretty cool portfolio (check out her website, link is below). As a singer-songwriter, her music is as creative and vivid as her artwork. It is also, unsurprisingly, extremely cinematic. For instance, her newest single, “Count Your Blessings”, would be perfectly placed on a future Quentin Tarantino movie soundtrack.

This song can best be described as soul-infused, desert Americana. The horns and scintillating melody have an old-school, ’60s soul vibe, but the crystalline guitar and the buzzing organ add a sinister Americana effect. Brown’s storytelling is also eerily rich and imaginative, as she tells the tale of a person either losing his mind, coming back to life, or both. It’s as if the protagonist is awakening from an exorcism.

Someone call Quentin Tarantino and tell him he has found the perfect song for his next movie as well as someone to help him co-write his next screenplay.

The song is from Mattiel’s forthcoming self-titled debut album. It’s out September 29th via Burger Records and available for pre-order here. Also check out the song, “White Of Their Eyes”, which is also amazing.

Hold onto your proverbial hat, because Vancouver dark rock goddesses The Pack A.D. are about to knock you off your feet with their new single. “Dollhouse” is the title track from their upcoming seventh album, and it’s a scorcher.

The track opens with a scuzzy riff and the words “It’s magical.” You find yourself nodding in immediate agreement. They then turn up the heat with haunting vocals and a vertigo-inducing guitar refrain that just devastates you. When Beck Black utters the phrase “In my dreams I haven’t slept in weeks,” you realize she’s predicting your future. You won’t be sleeping anytime soon because this killer song will be stuck in your head day and night for the foreseeable future. The good news is, you’ll be too hypnotized to care.

Wolf Alice‘s debut album, My Love Is Cool, made them the poster children of the next wave of indie-rock bands. It is time to think of the London quartet as much more than this, at least that’s the early indication we get from the singles off their sophomore album. The first release, “Yuk Foo”, was a ferocious post-punk number. Dream-pop was on the menu on the surprisingly delicious “Don’t Delete the Kisses”. The third song out reveals another side to this quickly evolving chameleonic band.

“Beautifully Unconventional” is arguably the most straightforward pop-rock song the band has created, yet it’s not by any means ordinary. Instead, it has an ’80s feel, masterfully mixing a groovy rhythm section (the bass line is outstanding) and cool pop melodies all within a rock mentality. The most striking elements of the song, however, are Ellie Roswell’s vocals and songwriting. Her voice is powerful, and her lyrics are witty and intelligent. Despite the image she portrays in the video below (she looks like a cross between Mae West, Audrey Hepburn, and Marilyn Monroe), she is saluting all the people who embrace non-conformity.

Wolf Alice’s sophomore album, Vision of a Life, arrives September 29th via Dirty Hit, RCA Records, and Liberator Music. It’s safe to say that Wolf Alice isn’t conforming to industry standards and frameworks, as they reach far and wide on this record. We cannot wait to hear it. 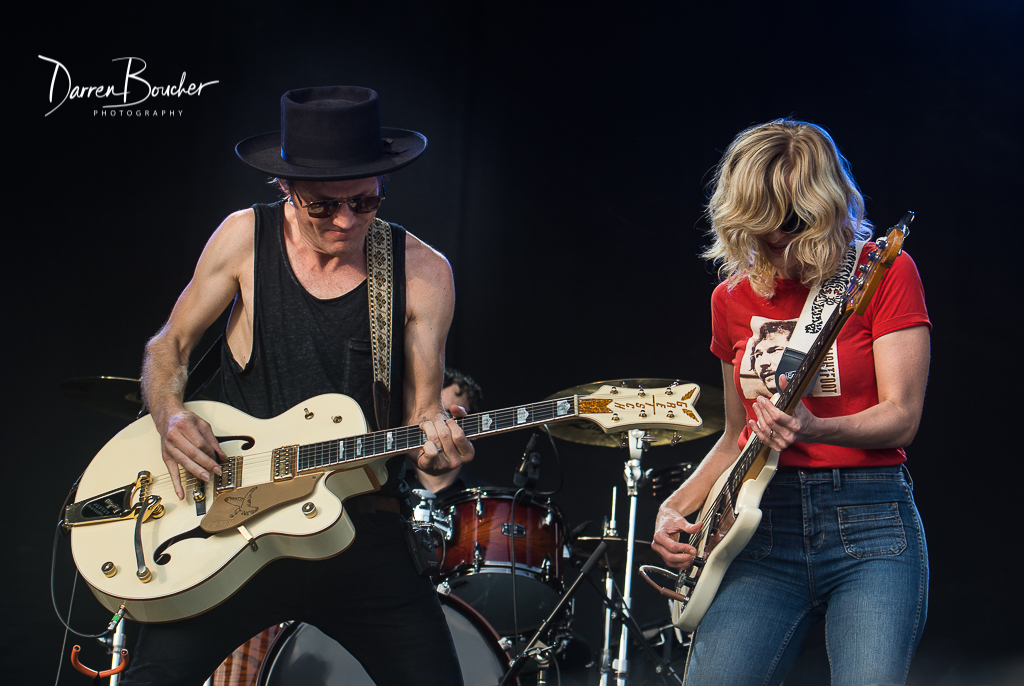 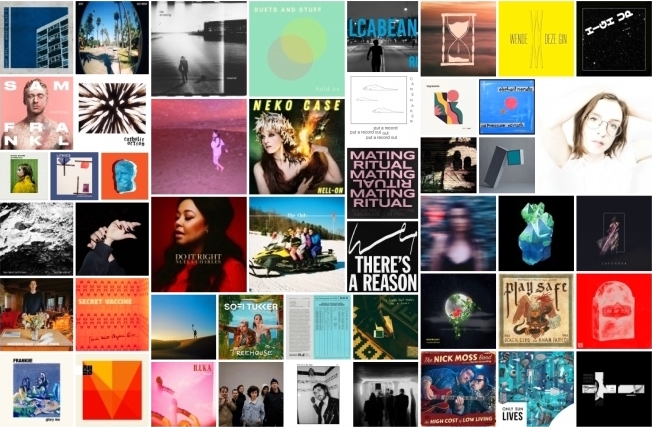