Autumn has officially arrived, and The Matinee September 21st edition reflects the changing of the seasons. These songs are lot darker and subdued, without a summer anthem to be found. Some of the nine songs, however, will amuse you, others will haunt your mind for days, and the rest will leave you spellbound.

So who could be this year’s Julia Jacklin, a young singer-songwriter who suddenly achieves worldwide acclaim for her classic sound and stories that describe the life of the regular person? There are plenty of candidates, but if we were the gambling type we would put a few dollars on Haley Heynderickx.

Her star is beginning to glow more brightly following her performance at and spotlight by KEXP. It’s her mix of folk, rock, Americana, and bluegrass, though, that is gaining her attention across North America and caught the ears of Mama Bird Recording Co., home to Courtney Marie Andrews and Saintseneca. Later this year, she’ll release her debut album. Its lead single from is the amusing and introspective “Ooh Sha La La”.

This song is spectacular. As Heynderickx lightly strums her electric guitar and the rhythms percolate in the background, she tells the story of a woman – possibly herself – filled with self-doubt who questions her existence. Her life is in such disarray that she becomes fixated on the sour milk in her refrigerator and wonders if she can do anything right. Then suddenly, she decides that she needs to start a garden, which Heynderickx emphatically expresses at the song’s end. There is something greatly symbolic about starting a garden, as for some it is therapeutic and for others it has great religious significance. For the Portland-based artist, the garden is just the start of something big.

In all corners of the world, a talented singer-songwriter is trying to figure out how to breakthrough in the competitive music scene. All she can do is continue to write and share her songs, hoping someone out there will listen. For Danish artist Juju Bell, music became her mostly full-time passion three years ago. In that time, she’s performed around Copenhagen (including a Sofar Sounds concert), and she’s emerged as one of the city’s most promising young artists. But unlike many aspiring musicians her age, she’s a throwback who prefers to blend jazz, soul, and pop. Her latest single sees her heading in a different direction, specifically to the late ’60s and ’70s and the Laurel Canyon scene.

“Narrow Line” is a stunning number reminiscent of the intimate, breathtaking folk-rock of Mary Chapin Carpenter, Joan Baez, and Joni Mitchell. Like these artists, Bell spins an optimistic message of resilience and perseverance, where nothing will slow her down. It is her stunning voice, however, that grabs hold of you and doesn’t let go. You just want to hear her sing continuously, but the song is only 2 1/2 minutes long. There is only one thing to do then – hit repeat and allow Bell’s voice to free your mind.

Nearly a year ago we were bowled over by the Tilly Scantlebury-fronted group Lazy Day. It was one of the most memorable first impressions we’ve had, and as such, the band have become fixtures in this space. Despite saying this, we missed the release of their debut EP, Ribbons, last week, although we have shared most of the songs on it, except for “Tv”.

Grab a seat, close your eyes, and let Scantlebury’s smoky vocals and intimate songwriting take you away. Through the lo-fi bedroom-pop soundscape, Scantlebury’s tale is like the shortened version of the film Notting Hill. However, it is much more intimate, heartbreaking, and spectacularly gorgeous. Her voice cracks with deep emotion as she wishes that things between her and a former partner would have worked out differently. Just as you become absorbed in her story, the band takes the song to heavenly heights. The final minute builds into a whirlwind of dreamy, shoegaze guitars and heart-pounding rhythms. It is the perfect ending to a song that leaves you saying, “Wow!”

Ribbons is out now on Lost Map Records. It can also be heard on SoundCloud and Spotify.

There has been no shortage of one-hit wonders in modern music. Some were tempted to place Maggie Rogers in that category when her debut single, “Alaska”, went viral after Pharrell Williams expressed his adoration for the song and the artist. Her debut EP, Now That The Light Is Fighting, however, showed that the New York City resident will be a mainstay on the pop scene. Whether she has achieved mega-star status is a question for another day, but she makes one thing perfectly clear on her new single, “Split Stones” – she won’t allow fame to prevent her from being first and foremost a thoughtful songwriter.

“Split Stones” is a tantalizingly intimate song. Whereas most pop songs allow the production and heavy beats to be the dominant feature, Rogers’ voice and lyrics are the star attractions. Her vocals are sincere and emotive without being strained or over-exaggerated. Her songwriting is honest and real as she offers a message for all the underdogs and those down-on-their-luck to keep their heads up and fight on. To scream if you need to and cry if you want to. Just let it all out and continue on.

The single is out now on Capitol Records.

We have watched Sorcha Richardson grow as an artist for well over two years. She first introduced herself as an emerging folk singer-songwriter, but she has since expanded her sound beyond her acoustic guitar. Despite the move to electro-pop and synth-pop, she has not abandoned her true talent – her ability to write songs that touch the deepest emotions and memories of every listener. Her latest single, “Waking Life”, is another example of her gifts.

The song is Richardson exposing her soul to us to hear. She reflects on her life and what she has achieved so far, and in the process she shares her anxiety about the future. It is a feeling many know far too well, and Richardson reminds us that we’re not alone.

“I’ve seen the future
Maybe it’s already here
Stick your neck around the corner,
Tell me if the coast is clear.”

“Waking Life” also reveals how much Richardson has grown as a musician. The subtle, rolling beats and the simmering easiness of the synth play in the background. They gently grow in intensity, leading to beautiful crescendos that are chest-swelling and dazzling. Her musicianship is reminiscent of Anthony Gonzalez (of M83), so perhaps that’s what the future holds for the Dublin native.

Superheart – “Count on Me” (London, England)

Every week, we need one song that in 30 seconds or less creates a “OMG!” reaction, a song that stirs every emotion in your body and makes you weak in the knees. Today is the day for exactly that kind of song has arrived, and it is called “Count on Me”.

Written and produced by Superheart, the new project of London-based producer and songwriter Luke Batt, “Count on Me” is incredibly stunning. The minimalist ambient and downtempo production create the beautiful, cinematic soundscape that is one part ’80s and another part 2017. Batt’s lush vocals further add to the song’s intimacy. His lyrics are simple, yet often it only takes a few words to get the message across. In this case, Batt reveals his undying love to the most important person in his life, and he lets her know he’ll always be there.

Grab your partner, spin this tune, and together become intoxicated by the song’s beauty.

Creating a firestorm across the Pond are Thee MVPs, who describe their ferocious brand of garage rock / noise-pop as “Thames pop”. It’s a clever label since they are a pretty unique band who channel the unrelenting rock heard on America’s west coast. No wonder US labels Burger Records and Greenway Records will be distributing the band’s next EP that is filled with live recordings of previously released songs. One of the tracks is the devilish tune “Slimelord”.

Originally released in November 2016 as part of a split single 7″, “Slimelord” is a garage-rock jackhammer. Everything in the song is done with a furious intensity. The fuzz-drenched guitars, the annihilating rhythms, and frontman Charlie Wyatt’s screaming vocals wail with ferocity. Consequently, it needs to be heard in the dankest underground venues where the music bounces off the concrete while a feverish mob and a mosh ensues. The lyrics, too, are awesome, as Wyatt describes a power-hungry, disgusting excuse for a human being. We’ll let you identify who that person could be.

The song is taken from Receiver. It drops October 13th via Greenway Records and Burger Records.

After Mackenzie Scott – a.k.a. TORRES – shared the bleak “Three Futures” and the tantalizing psychological thriller “Skim”, it was evident she was shedding the indie rocker label and turning herself into the female version of David Lynch. That is, she is transforming into a multi-dimensional artist who is using music as a cinematic medium to communicate realities we choose to ignore. Her newest single is the latest revelation of the brand new TORRES.

Her trademark, fiery guitar once again is turned into a frightening instrument that snarls, streaks, and sears in the background. It takes a back seat to the harrowing synths and rhythms she executes with haunting perfection. Scott’s voice is also menacing, and the storyline is even creepier. This is the tale of a stalker who watches her prey in the woods, offering a different view of the sexual predator. Listen closely, though, because Scott’s tale explains how Helen became what she is. It’s a creepy tune that demonstrates the creative brilliance of one of indie rock’s most underrated stars.

Watch the video below, which has a Blair Witch Project feel. As you listen to this song, you might have the same thought running through your head – somewhere, Siouxsie Sioux is smiling.

Winter is coming. It’s not just a phrase from Game of Thrones; it’s a fact of life. As seasons change, so does the music. Songs get a little darker and a lot more haunting. The anthems of summer are now memories, and now is the time when the truly creative and engrossing singles emerge. Songs take over your mind and your dreams, like “Stains”, the latest from Greek producer UnknownArtist and featuring singer Khris-Marii Palksaar.

With the trippy tenets of Massive Attack and the dark, probing ambience of Samaris, UnknownArtist has created a hypnotic affair. His production work allows the different textures and elements to slowly build and flood the air. They never overtake Khris’ sensual vocals that perfectly complement the song’s darkness. Her voice fluctuates from being very near to distant, giving the sense she’s a prisoner trapped in a dungeon or possibly the ghost of a person who was victimized in a crime of passion. Either way, her story and the entire song are perfect for this time of year when the nights get longer, the temperatures get colder, and the ghouls come out to play. 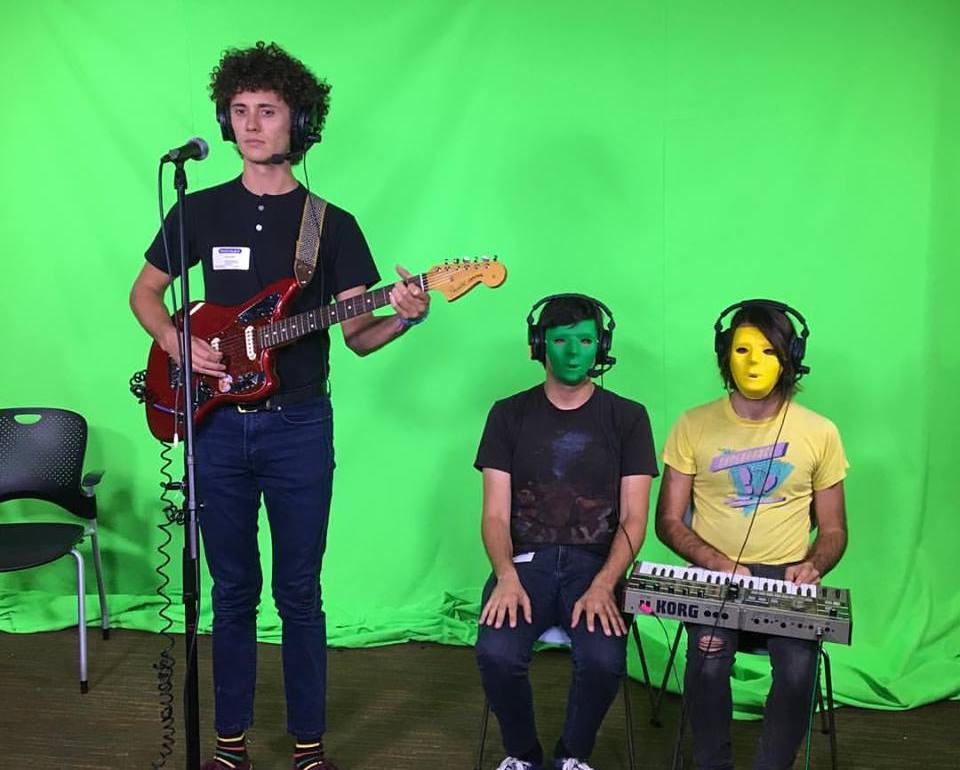 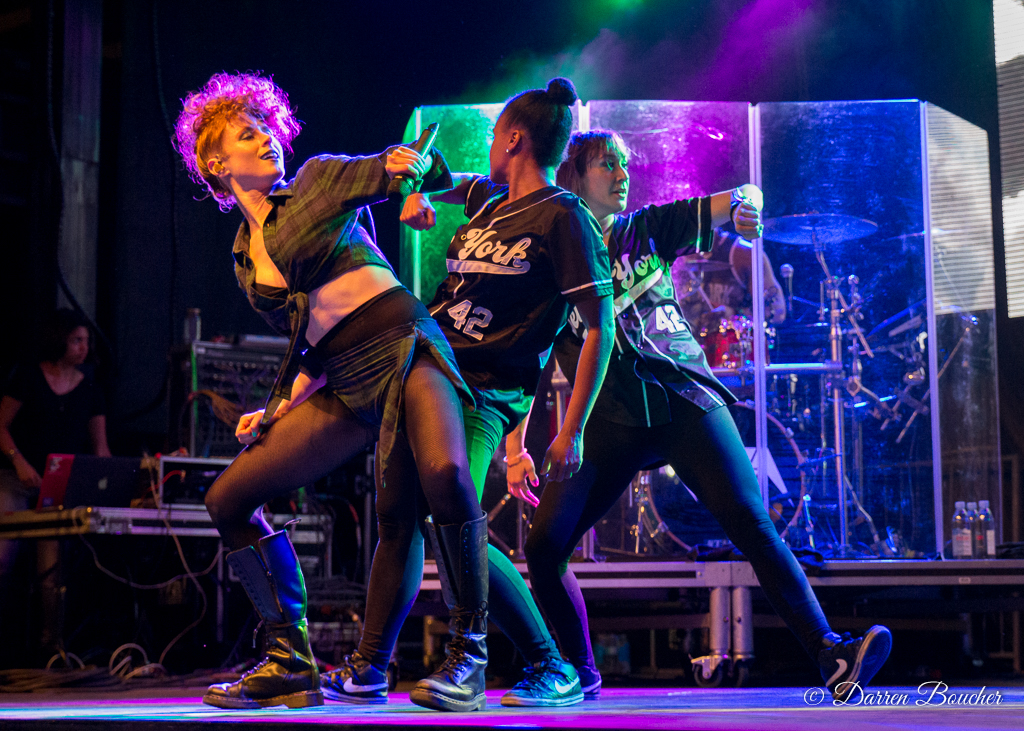