As we do every Friday, The Matinee September 22nd has nine songs to help you kick off the weekend. We kick things off a bit differently, featuring one of the great indie-rock artists and arguably the best songwriter of her generation as well as the return of a great UK band.

Somewhere in Bologna, Italy, an Angel Olsen fan is beaming from ear to ear. When the indie rock star stopped in the central Italian city in May of this year, a young man asked Olsen to play, “Special”, which she first laughed at the suggestion but then performed. Whether or not he was the inspiration for her to reach a series of B-sides, rarities, demos on her surprise album, Phases, is unknown, but he’s likely taking credit. And we thank him for reminding us about the brilliance of this song, which Olsen has performed live on occasion.

“Special” is indeed just that, and it is everything we love about Olsen. The song’s slow-building, lo-fi, reverb-filled gritty approach creates drama and suspense, and Olsen’s shallow but enrapturing vocals add a further darkness. Her lyrics are eerie, as she looks into the depths of her soul and searches for someone who can reach her. Someone who can make her feel “special” and just like his mother. Just as we fall into Olsen’s spell, the song slowly burns at the end, leading to some hypnotic head shaking a la her masterpiece single, “Sister”. It’s hard to believe “Special” is a “B-side” because for any other artist this would be one of the first three tracks on their album.

“Special” is one of two songs Olsen released yesterday. The other is “Fly On Your Wall”, and both can be heard on Spotify.

It’s been a while since we’ve heard from UK band Gengahr. To be precise, it was two years ago when they released their album A Dream Outside, which was unique and magnetic. “Carrion“ is their first release since then, and it’s an anthemic, psych-pop gem. With “Carrion”, the London quartet deliver melodic harmonies and mesmerizing vocals. The track is upbeat and surrounded in darker undertones compared to some of the tracks on the last album. There is also an extra urgency in this number, which further adds to the exhilaration. The new single easily proves Gengahr’s growth as a band, and it has us and likely their entire fan base excited for new and upcoming material.

Felix Bushe shares a bit about the track:

“Carrion’ is one of the hardest hitting tracks we have written, both musically and lyrically… The track is full of snark and bitterness, but also offers hope and triumph over the oppressive nature of the world we live in today. Born in part out of frustration, the song crashes on, an embodiment of the resilience we’ve found essential in getting to where we find ourselves now.”

The song is out now via Transgressive Records, and it’s also available on Spotify. Their sophomore is expected early in 2018.

Gengahr will play an intimate show at London’s OMEARA on October 13th, and tickets are available now on the band’s website.

HOLY – “Premonition / ◯ / It Shines Through” (Stockholm via Umeå, Sweden)

It has been two-and-a-half years since

Hannes Ferm – a.k.a. HOLY – has presented new music, which was when his debut album, Stabs, was released. Unlike many on PNKSLM’s roster, not a single peep was heard from the Swedish psychedelic mastermind. Then yesterday, he finally and literally re-emerged after spending more than a year locked up in a studio writing and recording music. During this time, he hardly stepped outside, yet his first single in 30 months is like a ray of sunshine.

We should correct ourselves, HOLY has released a double single as his first output, and “Premonition / ◯ / It Shines Through” possesses the feeling of stepping outside on the first day of spring. It is cool and vibrant, bright and fresh. A gentle psychedelic-pop vibe circulates in the air while Ferm’s soft vocals glide effortlessly like a soft breeze. A relaxing delirium sets in, and all you can do is smile and bask in the song’s warmth. It’s the perfect pick-me-up song and one which should be played on your way to work and during the trip home.

The song is out digitally today, and it will be released as a limited edition 7” vinyl on November 3rd via PNKSLM Recordings. HOLY’s sophomore album is expected in the first quarter of 2018. 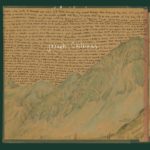 We’ve been introduced this year to several brilliant new singer-songwriters, but few can match the cinematic storytelling of Joseph Childress. This isn’t an indictment on the women and men who have shared their music with us. It reflects, on the contrary, the creative brilliance of the Colorado native, who has been writing music since he was 14 years old. His first single from his forthcoming sophomore album, “Virginia Bound”, was a journey for love. On “Leaving The Barren Ground”, he tells the tale of a vigilante simultaneously seeking love, revenge, and salvation in the Wild West.

A familiar, widescreen Americana approach is heard, as the acoustic guitar strums in the foreground and the steel guitar echoes in the back. Yet the song feels different since the instrumentation is restrained to elevate the song’s drama. Childress’ vocals and delivery resemble Kurt Vile, and his songwriting has the same vivid and intimate qualities of the indie-rock icon. In just five minutes, he crams a movie’s worth of storytelling, telling the history of the hero, his journey, and the unfortunate and sad conclusion. There’s no happy ending in this song, which further evidences how Childress is separating himself from the pack.

Kristin Welchez – a.k.a. Dee Dee from Dum Dum Girls and also known as Kristin Kontrol– has given us an autumn surprise with “Concrete Love”. Under her solo project, she evolved into a master hypnotic, synth-heavy, pop tracks while vocals are even more sultry. Lyrically, “Concrete Love” explains the perfect dichotomy of a less than ideal relationship with telling lyrics:

“This concrete love is bringin’ me down
But I still want you around”.

She questions the intentions of her lover, as she asks, “So tell me, do you live to love me?” We hope she’s not asking that question to us, but hopefully more people flock and discover her extensive talents (she’s a gifted DJ).

Welchez recently toured with heavy hitters Belle and Sebastian, Spoon, and Perfume Genius. She will also be scoring the music for the upcoming Nicolas Cage movie, Looking Glass.

RIYL: The Killers, Portugal the Man, Twenty One Pilots

kyd the band are Nashville-based brothers Kyle and Devin Guisande, and they are back with a new single, “Feel Something”. It’s the third song released from the duo, and they continue with a trilogy of sorts regarding their movie-like videos. It’s best to watch them in order to know what is going on.

The brothers have a way of presenting transparent and meaningful life issues into their songs but in a pop friendly way, much like Twenty One Pilots. With “Feel Something”, the two seem to touch on the realities and consequences of drug abuse, demonstrating that kyd the band are more than just style. These guys brim with substance, which is why we’ve collectively become bands.

It’s been a while since we’ve heard from soulful crooner Matt Woods. He’s been pretty quiet after last year’s Ain’t No Use EP. Lo and behold as summer turns into autumn, he releases two songs “Nervous” and “Craving”. We are sharing the former because it is on SoundCloud and is a beat-heavy, future-soul track that perfectly frames the glorious vocals of Mr Woods.

“Nervous” is a sensual single that speaks to the realities of being nervous around that special someone as the last stanza proclaims:

Think of Matt Woods as your modern day Al Green, as almost all of his releases could easily be spun to your well…in the mood playlist. Woods is a future soul artist that you should keep tabs on if you dig dreamy falsetto surrounded by hypnotic beats. He is also quite amazing live.

RIYL: A Place To Bury Strangers, The Raveonettes, My Bloody Valentine

Earlier this week, news broke that shoegaze legends My Bloody Valentine were back in the studio and recording a new album. Their return will follow on the heels of Slowdive’s and Ride’s successful comebacks. While these great bands were absent, plenty of lesser-known groups were doing their part to keep the most underappreciated genre from dying. One of those outfits is Pink Milk

Like their more popular brethren, Maria and Edward unleash a maelstrom of reverb-drenched, grimy guitars on their new single, “Kill 4 U”. There is more of a methodical menace in their approach, as instead of using their instruments as seductive tools they wield them like soul-slaying weapons. Maria’s vocals, though, are the embodiment of enchantment, seductively drawing us further into their cryptic world. They are, as we have previously called them, the assassins of shoegaze, and they have once again blown our mind.

Back in 2015, Melbourne shoegazers Wild Meadows released their debut EP, and they skyrocketed to the top of the Aussie indie scene. Their music was played on Triple J, and a sizable following grew in a very short period of time. Then life got in the way with members moving and pursuing other ventures. Following a lineup change, the band returned to writing new material, including the dazzling “Nowhere”. That was released almost exactly a year ago. Well, they’re finally back much to our delight.

“Feel The Noise” is a fantastic shoegaze number that echoes the great bands of the genre. The dreamy vocals of James Ross and Jessica Aliese play off one another brilliantly, giving us the feeling that we have arrived in Eden. The reverb-drenched guitars are classically ravishing, sparkling in the air like fireworks on a clear, windless night. For long-time shoegaze fans, the song is a reminder why the genre will never die and why we absolutely love it. Newcomers to the genre, meanwhile, will get to discover how intoxicating great shoegaze can be and just how great a band Wild Meadows are.

“Feel The Noise” is the lead single from the band’s forthcoming, self-titled, debut album. It is expected some time in 2018. Apparently, all the songs have been recorded, so here’s hoping it will be released in the first quarter.