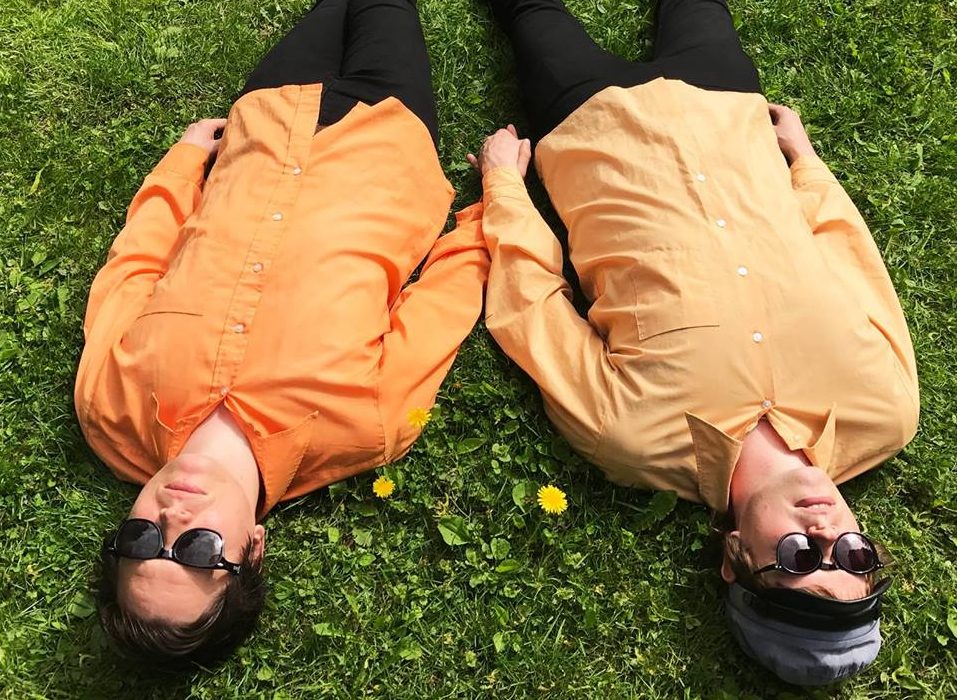 Music tends to follow the seasons. Spring ushers in heart-warming and optimistic numbers. Summer brings over-produced dance and rock anthems. Brooding and gloomy songs, meanwhile, populate autumn and winter. Don’t tell the newly formed super-group Imitating Aeroplanes that they should be introducing music that makes our knees tremble and causes us to lose our minds. Last Friday, the project of Tord Øverland Knudsen (The Wombats) and Marius Drogsås Hagen (Team Me) released their debut album, Planet Language, which is a dizzying, widescreen affair of psychedelic disco-pop. The LP is made more for the warmer months, yet as the calendar turns to October the duo give us a reason to get grooving one last time on the beach.

Planet Language, though, is much more than a fun and entertaining record. It is also a tribute to Japan, where Knudsen and Hagen have spent time touring with their other bands. Opener “Roppongi Hills” is the first clear signal of the duo’s love affair with the Land of the Rising Sun. Using electronic beats that sound like they were generated from a Commodore 64, the song would fit perfectly as the opening theme song of one of Japan’s numerous hysterical game shows. It’s not, however, all whimsical, but instead it is like an electronic-driven orchestra created by two individuals.

The groovy and spacey “Hourglass” concerns a Japanese folklore character who emerges from an underwater adventure to discover himself living 300 years in the future. Imitating Aeroplanes celebrate his return with an uptempo, invigorating anthem that features shimmering synth flourishes. The lyrics, however, are a combination of optimism and dread, as the hero realizes that the world he once knew is in danger.

“All the pressure what we are feeling
To do what is right for us.
All the choices and our actions
Disappearing into white smoke.”

The hallucinating “Planet Language” delves deeper into Japanese culture with its vibrant, anime-like tones and message of feeling alone within the confines of a densely-populated metropolis. On the closer, “Sakebad i Kanazawa”, the duo share a beautiful serenade to the capital of the Ishikawa prefecture. Known for its lovely mixture of traditional and modern art and gold-leaf covered trinkets, Kanazawa is turned into a place of awe and wonder on this three-part epic. The first segment is mellow and serene, as the production work creates a feeling of wonder. The tempo then slightly increases and bewilderment turns into curiosity and amazement with the searing synths, tickling bass line, and heavenly chorus filling the air. A moment of awe overcomes us. Then the song turns into a radiant, psychedelic-pop disco number, and this part represents our integration into this fascinatingly complex place.

There is more to Planet Language, though. The uplifting “Stomping Ground” is a song about vindication and resilience. As the ’80s-esque production work creates a sugary sweet, workout-friendly vibe, involuntary hand-clapping and side-to-side swaying will ensue. Knudsen and Hagan’s lyrics, too, are inspiring, providing us hope that tomorrow will bring better days.

“Holding on to everything we’re missing
Moving on was never easy.
I’m re-living distant memories,
But losing my foothold and leaving my stomping ground.”

Imitating Aeroplanes reach the peak of their talents on the excellent “H.I.T.S”, which stands for “head in the sand”. A Tame Impala-like, psychedelic disco-pop vibe permeates across the song. The synth work is majestic, and the crystal-clear harmonies are extravagant. The bass line, however, is what puts the song over the top, giving the number a funky and intoxicating vibe.

The dance anthems keep coming with “Billy Boel”, whom we have no idea is. The urgency is increased, and the shimmering qualities are off the charts. Despite the song’s infectious grooviness, Imitating Aeroplanes maintain their focus on the relationship between technology, humanity, and nature. Maybe Billy Boel isn’t any particular person, but we are him. As the duo tell us, “let’s get out in the sun”, they are subtly reminding us that there is more to this world than our computers, mobile phones, and televisions. There is an entire world to discover and to protect. So even if the weather is getting colder and the days darker, there is always time to breathe the fresh air. With Planet Language, Tord Øverland Knudsen and Marius Drogsås Hagen have given us the perfect album to do just that

Planet Language is out now via Propeller Recordings. Purchasing and streaming links are available here.