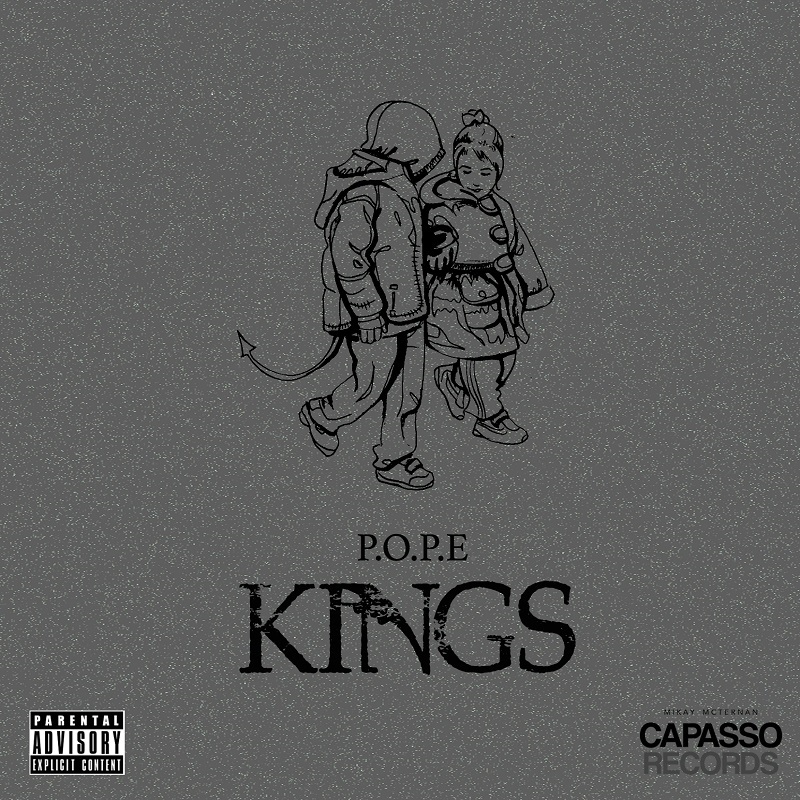 Spoken word music is a tough genre to get right. Mastering rhythm over melody is a complex art. Giving meaning to the words adds a whole other dimension, requiring authenticity, honesty, and courage. Yorkshire-based P.O.P.E. took on this challenge just three years ago. It was borne out of difficult times when he found himself broke with nothing but books and a writing pad for company. Turning adversity into a challenge, P.O.P.E. explains that he:

“spent months writing tongue twisters, rhymes, stories, anything that kept my creative juices flowing. Or maybe it was nothing more than the scribblings of a mad man! Either way, I took these words on a page and decided to write an E.P.”

The result of his efforts is Kings, a five-track EP released on Scottish label Capasso Records.

Starting, appropriately, with “An Introduction”, P.O.P.E. sets out his theatrical credentials. There’s a cinematic quality to both music and storytelling, as the opening bars draw the listener into a sinister world. Questioning experience, motivation and control, P.O.P.E. makes it clear that this will not be an easy album to listen to but compelling nevertheless.

Bringing a character to the centre of the story, “Just Breathe” combines a litany of life challenges with a meditative arrangement. There’s an aura of spirituality to the song, which P.O.P.E. acknowledges:

“I have been told that many have a religious feel to them which is the intention to a certain degree, because I have a fascination with religions and beliefs. I also want people to take any meaning they want from within my lyrics as that is what music is about and enjoy writing a verse that has several different meanings within it.”

The acoustic remix of “Just Breathe” features Mikay Mcternan (not on the EP but available on SoundCloud) is also worth a listen, especially to explore the contrast that can be achieved with a different musical approach.

This is also brought home in the opening section of “I Am Not”. Perfect poetry set to lightly orchestrated piano, this is a letter to someone wronged: “I am sorry for all these things I have done..I used lies to cheat and sometimes stall”

The story develops its second side, so we know, if we ever needed telling, that relationships are never that simple:

“Are you listening?
You made me feel worthless.
You made every one of my steps seem so average and pointless.
I looked upon you as my angel.
You just looked down on me.”

This is powerful stuff, alarming yet relatable, questioning where power, victimhood, and redemption rest.

Raising the energy, “Tick Tock” is a percussive call to action. Words flow at speed, challenging perceptions of allotted positions. P.O.P.E.’s passion for lyrics is front and centre, as he explains:

“I have always looked at forming words within a song/poem as a kind of puzzle. In my opinion, lyrical value is often overlooked in much of today’s music and that is one of the reasons within my music I try to open the door to wordplay whilst attempting to adopt a hard hitting feel within them.”

Hard-hitting is certainly the term for “Nemesis”. Unforgiving and demanding, claiming retribution as a right, this is no happy-ending story:

“Remember I own your dreams,
So enjoy that well-earned sleep,
When you wake I’ll be there to guide you toward certain defeat.”

“Basically I just enjoy playing words and also have a distaste for conformity. Not in a ‘Burn everything and fight’ kind of way, but I want people to hear my music and for them to know that we as people should never be afraid of questioning anything, even if it does tread on people’s toes.”

P.O.P.E.’s lyrics are predominantly centred around subjects that he feels are neglected by many singer-songwriters, so in “Kings” he offers an anthem for new populist politics, exposing the conspiracy at the heart of the system. “Has every human slipped a sedative or have we all just lost our minds?”. Marching fervently towards the close, there’s no holding back, every beat and every word is placed to maintain attention and make a point.

His music may not be mainstream, but P.O.P.E. is making waves. As well as being featured by BBC Radio 6 Music’s Tom Robinson, he played the prestigious Edinburgh Fringe festival this year.

Kings was released in March 2017. The EP is available to download for free via SoundCloud, but work of this calibre deserves an exchange of monetary value, so do the right thing and buy your copy here to show you care.

Then follow P.O.P.E. and drop him a message to tell him you’ve appreciated his music and poetry, at: 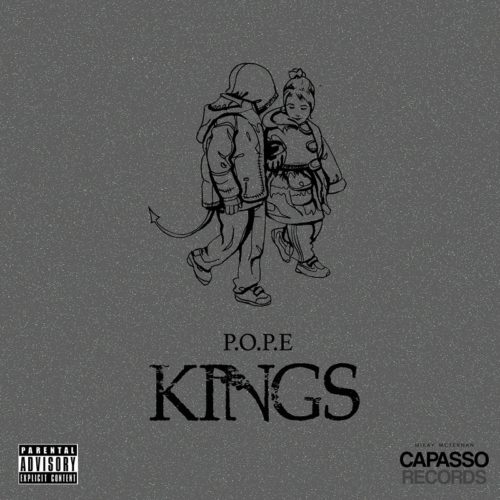 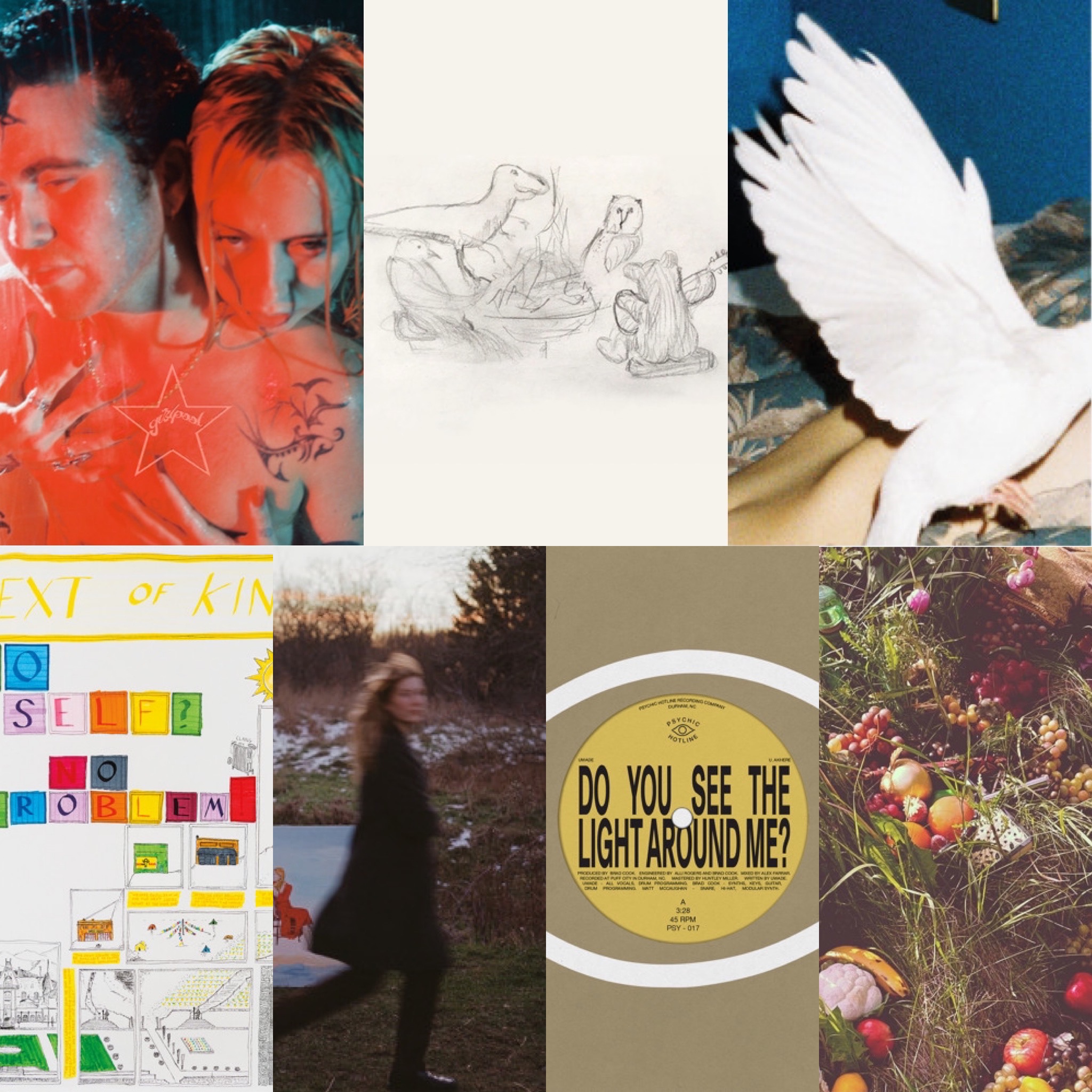