For anyone who has followed the five Brightonions who call themselves White Room for the past two years already know they are one of the most promising and underrated psychedelic bands around. While fellow Brits Temples helped usher in a new wave of neo-psychedelia, Jake Smallwood (vocals/synths), Jacob Newman (guitar), Tristan Sava (guitar/keys), Josie McNamara (bass), and Hen Sava (drums) have taken the genre to even more delirious and spectacular places. Their debut double EP, the aptly-titled Eight, demonstrates the cosmic wonderland of their sound and the fantasy-like stories in their songs. In other words, it’s Tim Burton-level imagination set through the spacey filters of Tame Impala and Pond.

At eight songs, the record could easily be an album, but there are probably two reasons why White Room have opted for the double EP approach. First, seven of the eight songs have been shared over the past 18 months – either as singles or double AA sides. Second, we assume that they are working on new material for their debut record – or at least we are hoping this is the case. Regardless if one has heard the songs, having them all combined in one neat package allows listeners to appreciate their brilliance.

The EP explodes with one of the best three songs to open an album, and all elicit the response, “F*ck yeah!” The head-noodling, jump-out-of-your-seats anthem, “The Blue”, is the first salvo. The song is littered with catchy, addictive psychedelic hooks, which provide the perfect canvas for Smallwood’s daydream about traveling through time with a special someone. Sixties and ’70s summertime psychedelia flows through “Tomorrow Always Knew”, which evokes thoughts of simpler times when we spent days dreaming about big things.

White Room turn up the anthemic noise on the smashing “Stole the I.V.”, whose melody has a touch of Filter’s smash hit “Take A Picture”. The song, as such, is not merely an escapade into delirium but a journey into a lush, exotic place deep inside your mind. As the the shoegaze-y guitars swirl, the rhythms pulsate like a beating heart, and Smallwood’s smooth vocals hover above the shimmering soundscape, you might be searching for the defibrillator to jump-start your heart once it is all done. Lyrically, the song comes close to this very thought, as the band deliver a message of pushing forward and not succumbing to the past or someone else’s agenda.

“I never thought you would leave this story.
Said you were immortal then you forced me to grieve.
Close the door, never say you’re sorry.
You stole the I.V.
I get my poison from the dreams.
I can’t sleep when there’s no dreams.
Sit back, relax my dear,
I won’t shed a single tear for you.”

White Room slow things down a notch with “Take Me Away”, which sees the band truly embrace their inner Tim Burton. The spellbinding psychedelic weaves are akin to Dungen while Smallwood’s distant vocals feel like they are in another dimension, which is where his lyrics take us. This isn’t the band’s most far-out number, however. That honor goes to “Cannibal Song”.

Imagine The Beatles at their trippiest (such as “I Am the Walrus”) mixed with a bit of the freak-psych of The Horrors, and this summation is “Cannibal Song” – at least musically. Lyrically, the track could be the personal anthem for Dr. Hannibal Lecter, the psychiatrist / serial killer who was memorably portrayed by Anthony Hopkins in The Silence of the Lambs. As creepy as the music is, Smallwood’s dead pan delivery takes the song’s eeriness to another level.

“Won’t you join me for tea tonight?
I’ll cook you something nice,
Hands and feet with a side of beans and rice.
I’ve got a taste for you
Between your hat and the sole of your shoes.
To me, you’re the last of a feast that I’ve seen for years.

Explosive exhilaration is rekindled on “Cable-Built Dreamland”. The first third is like the countdown to a space shuttle launch, as Newman, the Savas, and McNamara build the intensity and anticipation with their marksmen-like precision. Around the 90-second mark, the tune lifts off. A hazy delirium overwhelms the listener, as we are taken through wormholes and landing in some faraway place in our minds. In the case of “Cable-Built Dreamland”, Smallwood describes how social media and TV affect people’s perceptions of themselves and reality. They’ve, as such, created their own worlds and, as a result, cannot differentiate fact from fiction. It’s a fabulous tale and indictment of what our world has become (not to mention how one “leader of the free world” lives his life).

“Twisted Celebration” with another zany and whimsical tune. The song sounds like a day out at the carnival or circus, although Smallwood’s lyrics are more akin to an episode from The Twilight Zone. It’s a wacky number, but it’s also awfully clever as he describes how two people are just not made for one another.

“Take a step closer, you’re almost out the door.
I can’t hold you up forever, I’ve got my own fears to explore.”

The double EP closes with the band’s newest output, “Circles”. It’s the grooviest number on the record and a perfect ending. With a shoulder-shimmying “Brit-pop-rock” vibe, the song leaves listeners on a massive high. In addition, the Brighton quintet remind us that we don’t need to live a linear path nor draw lines in the sand. Instead, time can be infinite, experiences can be shared by all, and inclusive and harmony can be achieved. Life, after all, is full of fabulous surprises and unknown wonders waiting to be discovered (or re-discovered), just like White Room and their terrific gem of a double EP.

Eight is out now via Deltasonic Records. Stream it on Spotify. 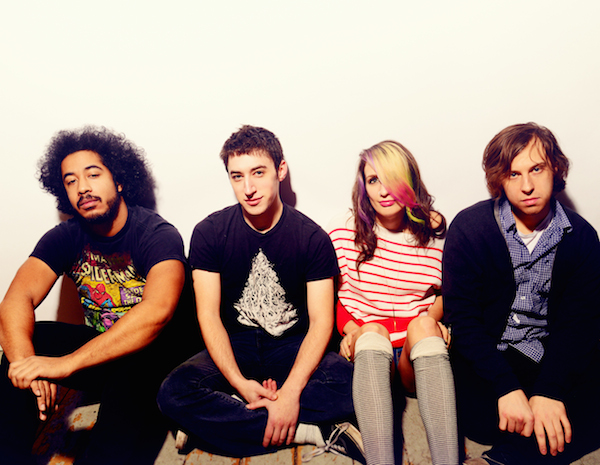