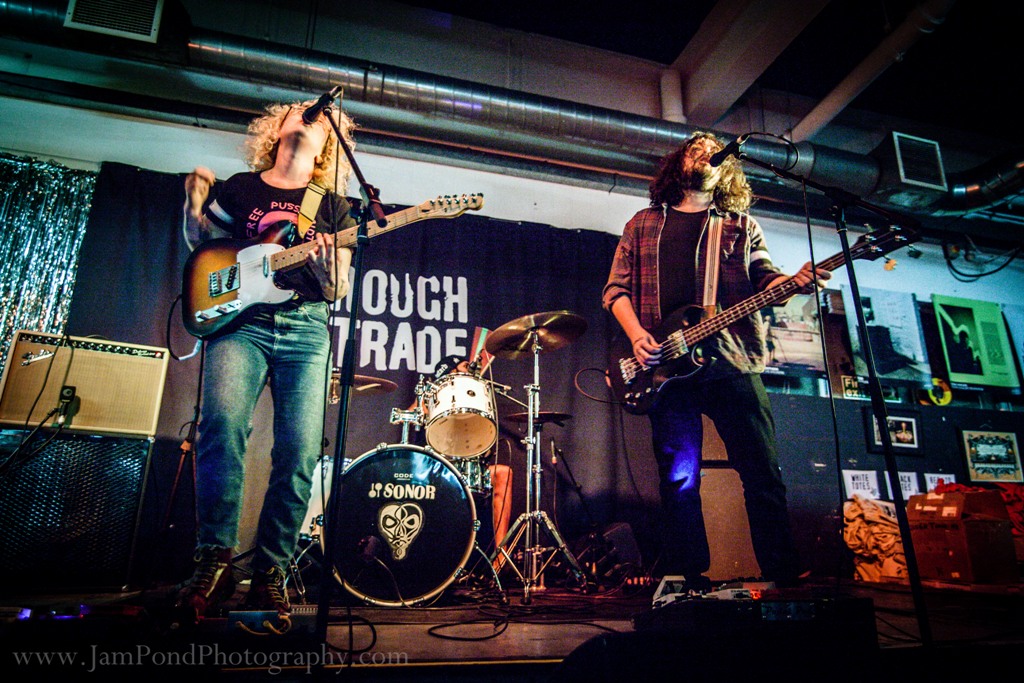 Gig in a shop. Not a bad idea. Thirty years ago today, I was the Assistant Manager of an Our Price Music branch, which was a national chain of record stores in the UK that got rid of vinyl in favour of CDs and then got rid of those in favour of VHS and mobile phones. No wonder it no longer exists.

My shop was in former Prime Minister David Cameron‘s home town of Witney. I probably sold him some Dire Straits in my time there. Prophetic.

The shop was too small to swing a cat in, let alone put on a gig. Not so at tonight’s venue. 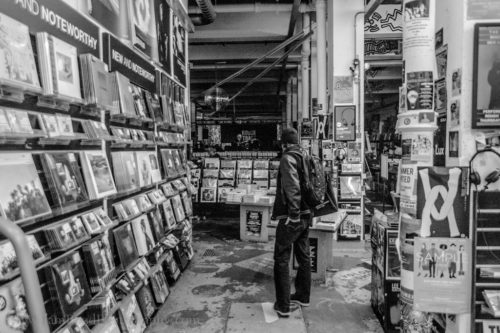 Rough Trade East, located in the heart of London’s trendy Shoreditch, is found in what I assume is an outbuilding of the old Victorian red-brick Truman Brewery. The view from the archway looks like a scene from Sweeney Todd or Jack the Ripper and those without signature hats need not enter.

The shop is full of expensive vinyl and the remains of gig posters stuck to the walls by brave promoters. It even sports a coffee shop that also sells beer. Although when I arrived, there was nowhere to sit as the cafe space was rammed with crates full of MGMT albums and merch. More Hi Fidelity than high fashion.

The stage is found at the back of the cavernous space and regularly hosts album launches – see the band, have a beer, buy the product. Smart.

Thunder on the Left – National Insecurity

Tonight was the return of Thunder of the Left.

I suspect that Carla, Arun, and Adam will be cursing me for mentioning Dave Cameron in this review – they are agi-pop purists. Angry people with something to say. The band name probably indicates where their politics lie. They are also people who are doing it for themselves, kicking against the pricks by putting out their first album and organising all their own marketing and PR in process. 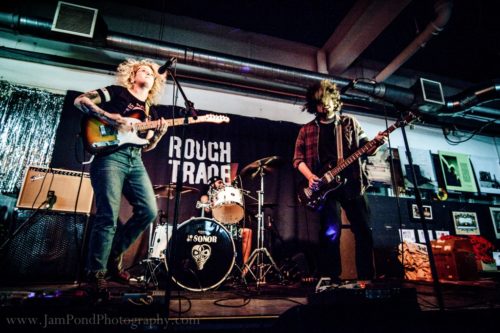 They played to a packed back-of-the-shop while bemused tourists continued to browse at the front. I even saw one firmly engaged with a listening post, but I don’t know how they heard anything over TOTL. Thunder on the Left play it loud and really belted out tracks from their new album, National Insecurity.

Tunes ranged from the guttural chant of “Everyone Is Not Me” to the almost funky bass line that pulsates below the title track, “National Insecurity”. Songs are riddled with ear-worms. Listen to the same track and you will be singing, “Are you living, are you dead? Brush your teeth its time for bed”, for weeks. 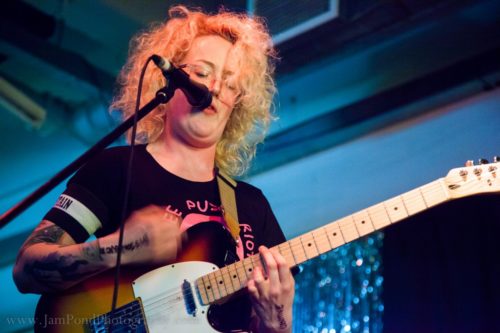 The album itself boasts 11 fierce songs laced with doses of strong messages about the state of society and punctuated with plenty of swearing. (Have a look at the set list below to see what I mean.) I’m surprised it doesn’t carry a Parental Advisory sticker, as it feels like it shares roots with some of the harder hip-hop from the early ’90s. Carla’s lyrics are socially minded and designed to make you think. The sound is built around heavy guitar riffs, tight drumming ,and complex battering-ram bass parts. You’d probably find their CD in Rough Trade’s indie/rock section or the one labelled “Modern day Fugazi/RATM, with female singer”.

Carla is a kick ass performer. Small, blonde, tattooed, wearing glasses, passionate in her delivery, and merciless with her Fender. On stage, she is a whirlwind – someone that you probably wouldn’t want your son to bring home to have dinner with his grandparents. Off stage, she is modest and thoughtful and very appreciative of the people that are supporting the band’s rise to greater things. It’s not surprising that I included them in my “Ones to Watch in 2018” review. 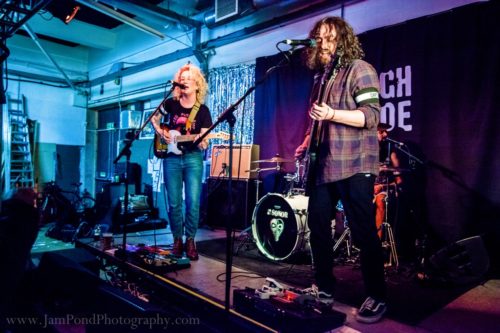 All three band members wear “Captain” armbands as their team uniform when they perform. I must ask one of them what that is all about. Here’s another interesting fact for you – all their songs are in the key of D or E.

* Tracks on the album National Insecurity, which the band self-released last week.

Marcus Jamieson-Pond is a regular gig reviewer for The Revue. His other write ups can be found here. To see full sets of photos from more than 300 other bands shot since January 2017, visit www.jampondphotography.com. 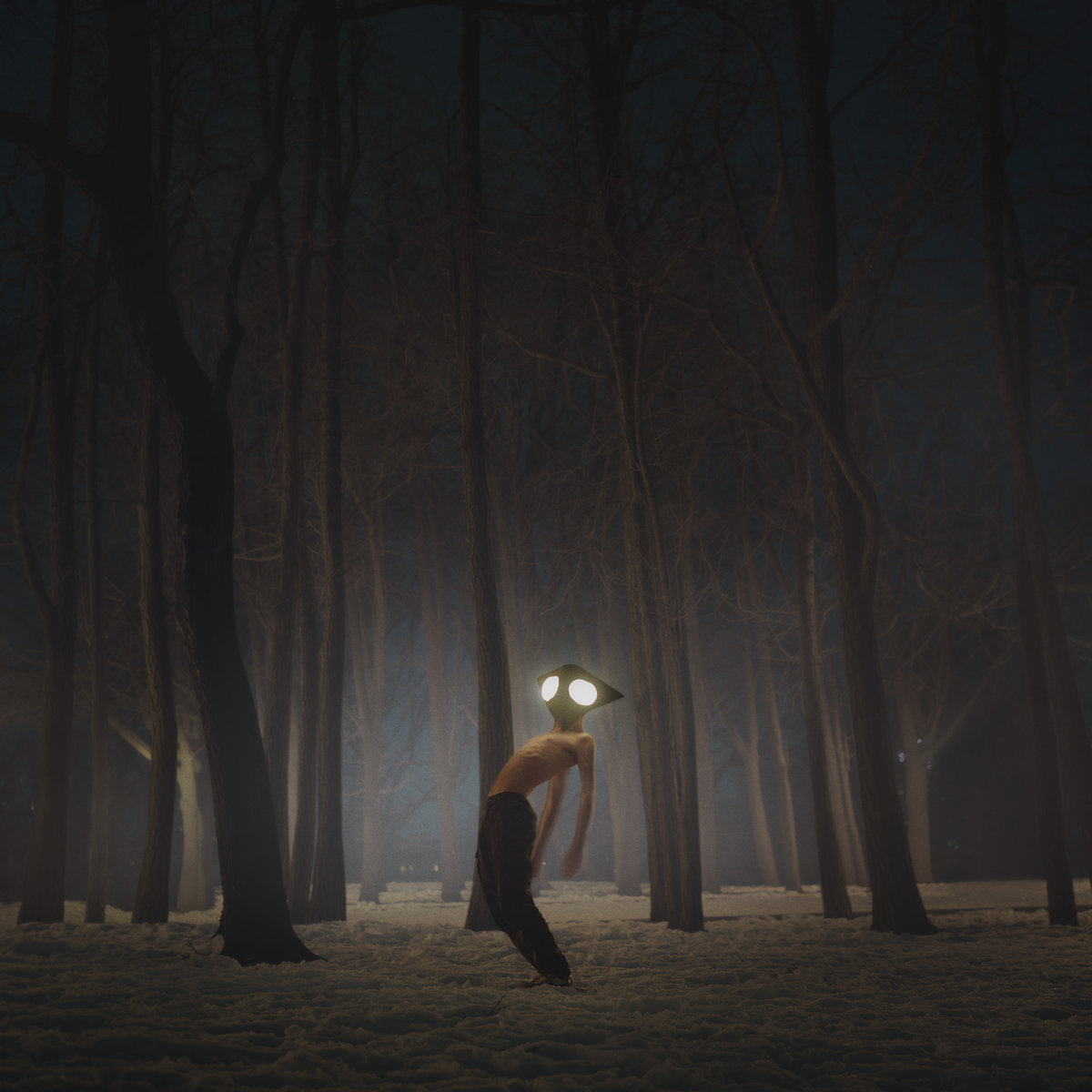