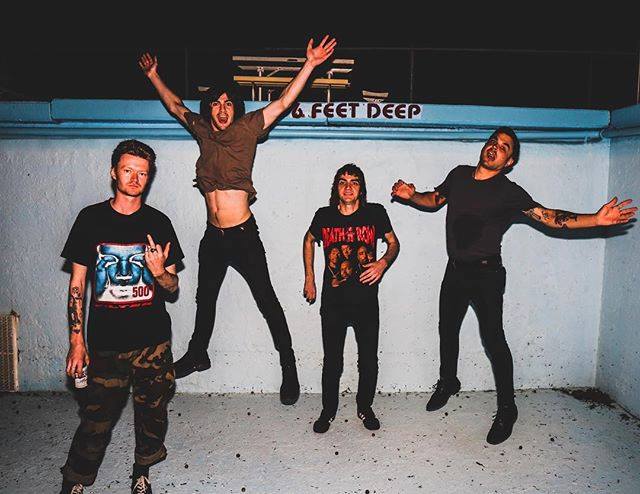 Through their first three years as Acid Dad, JP Basileo (bass), Sean Fahey (guitar/vocals), Vaughn Hunt (guitar/vocals), and Kevin Walker (drums) established themselves as one of New York City’s most exciting garage-punk outfits. Even without a full-length, they performed at the popular Northside Festival within a year of their formation, and they’ve drawn comparisons to Wavves, Fidlar, Twin Peaks, and the great Ty Segall. The influences, however, expand on their long-awaited self-titled debut album.

The LP can be divided into three sections with each reflecting a different phase of living in the Big Apple and on Long Island. There is the sound of suburban youth angst and restlessness, which is represented with the band’s original rambunctious and exhilarating garage-punk. After lulling us into false sense of calm, opener “Die Hard” explodes into a fast and feverish number. The song represents a new zeitgeist of a younger generation, where New Year’s resolutions are seen as obsolete and youthful apathy is a thing of the past.

Acid Dad further enter the political fray with the driving garage-punk number, “Mr. Major”. “We all lie. We all lie because Mother Russia doesn’t suffer”, sings Hunt, revealing his disgust for Russia’s intrusion on the 2016 election. The furious “Mistress” possesses the edge of NYC’s punk scene of the early ’80s with the lyrics to match. It’s not merely a song about an illicit affair, but also about powers-that-be listening to our conversations.

The raucous and arguably the album’s highlight, “Marine”, similarly tackles Russian interference. A Sonic Youth vibe percolates throughout the track with Fahey doing his best Thurston Moore impersonation in the lyrics.

“I will admit that I needed his help,
But I could not serve his protection
Now that he is gone and
Then I cannot seek him out,
I won’t search any occupation.”

The second section of the album is one of confidence. Of a young person walking through the streets of Manhattan with a chip on her shoulder. The chugging “Bada Bing” with its Television’s mi-fi approach provides the perfect anthem for the teenager or twentysomething to reveal herself to the world. On the slow building “Dissin'”, a Lou Reed-era The Velvet Underground style blooms. And like what the icon artist and band perfected in late ’70s, the song reflects a young person’s transition from pretentious teenager to humble adult.

The third is one of escape from the concrete jungle and the urban sprawl of the suburbs. The aptly titled “Come Outside” is the first of the batch. With a summery, Real Estate-esque vibe, Acid Dad amp up the sun-bliss, surf-rock melodies and infectious levels. The lyrics, too, reveal the self-imposed imprisonment many experience. Whether it is fear or one’s fixation with social media, video games, home is our entrapment. The jangly guitars, the groovy rhythms, and Hunt’s smooth vocals on “2Ci” is an outing out on Montauk peninsula. Specifically, a beach party breaks out with your friends demonstrating their best moves. This is the sound of young people momentarily releasing their frustrations and “letting go”.

The album as whole, meanwhile, is the sound of a young band not willing to be stationary. While they’re still at their best when they really let go and deliver rollicking garage-punk tracks, the forays into lo- and mi-fi rockers demonstrate Acid Dad’s potential. The new approaches also leave open plenty of avenues for the quartet to explore in the future. If their self-titled debut album told us anything, it is that this young band is full of surprises, and they won’t be imprisoned nor entrapped by people’s expectations. For that matter, they’ve already exceeded them.

Acid Dad is out now via Greenway Records. The band is currently on a cross-country tour. They have one Canadian stop (Toronto) scheduled for the spring plus additional dates in Europe in May. Details are available here.