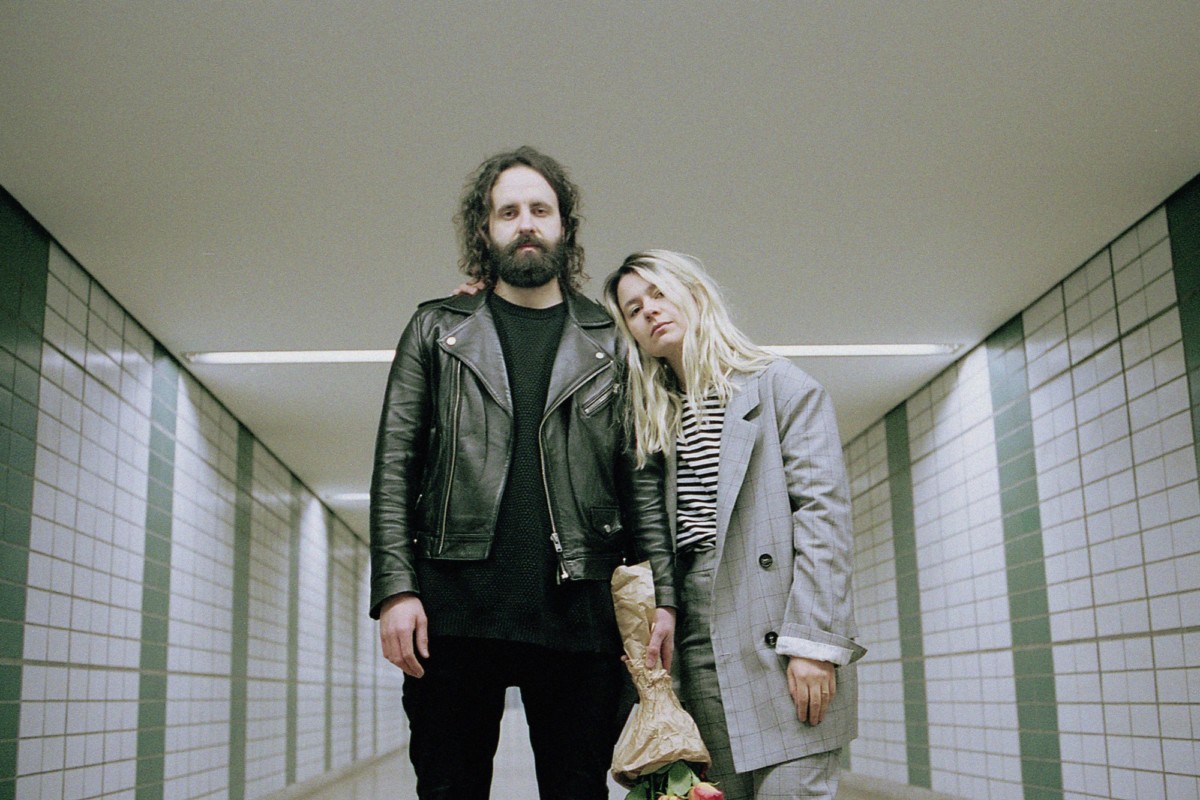 A year ago, Kraków Loves Adana, the project of Hamburg-based Deniz Cicek and Robert Heitmann, made the melancholic exhilarating with their underrated and overlooked album, Call Yourself New. It was a unique concept album that followed multiple individuals who all shared one common thing – finding meaning in their lives. Since the recording of their third LP, the world has significantly changed and the search continues on Songs After The Blue.

Like CYN, Songs After The Blue is a mesmerizing combination of hauntingly brooding soundscapes and gripping songwriting. There is, however, one notable difference. Whereas the former was premised around Heitmann’s stark and shallow guitar, the latter revolves around a dark, synth-wave and shoegaze approach. The two albums are like Kraków Loves Adana stepping out of the punk wave of the Vietnam War and then entering the foreboding Thatcher and Reagan era of the ’80s, at which time darkwave and industrial rose to prominence. Cicek’s stories also are reminiscent of that era’s events and these current chaotic times.

The beautifully brooding “Rapture” kicks off the album. As Heitmann delivers a heart-pounding shoegaze riff and a throbbing bass line echos in the foreground, Cicek’s intoxicating voice quietly sings, “This is the rapture of my heart / Of my rebel heart”. While the song may sound like a love tune, it’s the silent anthem of a restless generation desperately seeking change. It’s the song of a revolution happening, much like how millions of women encouraged many others to stand with them as they said #MeToo.

This idea is pursued further on “Bloom”. Feeling more like the chill of January than the bright colors of May, the duo deliver an intimate and hypnotic number. Complement by a haunting keys and electric drum arrangement, Cicek’s icy delivery tells the tale of a person consumed by an incomprehensible and devastating. Her transformation is irreparable and irreversible.

Whether that person is “Heather” is unclear, but the song’s eerie tone and Cicek’s lyrics indicates she is one potential outcome. Ripped apart from grief, pain, and abuse, Heather finds luck by getting high. On the equally mysterious “Resonating Truly”, another person is an “open door” and turning into “a farrow thing” as her blood is changing. Her experience, though, is being the one through whom others live vicariously. As one being enters, another exits.

“You try and live through me,
But I try to carry on.
It’s like an open window with the heating left on.”

While many of the songs look introspectively, Kraków Loves Adana do tackle the forces at play. The throbbing, darkwave spectacle that is “American Boy” is the first. The song simultaneously will invigorate one’s soul while haunting the mind. A harrowing synth seamlessly merges with shallow guitars, and the foreboding rhythms to create a sinister atmosphere. This is the anthem to world where trust and truth no longer exist, where authority is abused, and where the me is the ruler of us all.

“Oh you think so much and live so little.
Got your hope stitched on your sleeve,
But you’re the one that deceives
Turning pain into a perfect product.
Modernism is a dream we’ve been living in between.”

“The Day The Internet Died”. With just a keyboard, synthesizer, and electric drum kit, the duo create a serene soundscape that could be the welcoming music to a digitized heaven. Cicek’s voice welcomes us, although she does not speak to us. Instead, she elegantly explains how humanity has become dehumanized, where the emotional connections between us have been erased and apathy now reigns. How we’ve allowed ourselves to be reprogrammed.

“What if the internet
Closed its gates at midnight?
We’d have to take a look at each other
For the first time
Would we be tempted to say nothing
Or have nothing left to say?
Sitting awkwardly in silence,
Doesn’t matter anyway.”

Even in a place one calls home can things feel unfamiliar, as revealed on the stuttering “Hamburg”. Cicek callously reveals how she is “planning my next risk to take” and how she feels like a ghost to everyone around her. Is it she that is changing or the world around her? Is she in control of her destiny or has she succumbed to the walls and entrapments of those who rule her home? Can we even call it home anymore?

These are the questions that percolate throughout Songs After The Blue. No answers are given because the story continues. Because the world we live in now remains as puzzling – it not more so – as it was before. It’s up to us to figure it out and find our voice before we become like “Heather” or the beast inside blooms and envelops us. And that’s all Kraków Loves Adana offers – a warning of the impending darkness.

Songs After The Blue is out now via Better Call Rob Records. The duo has a handful of gigs scheduled in Germany this month and in May. Check their social media for updates.