The Matinee ’18 May 18th features some summery and autumn-like tunes. As such, no matter what hemisphere you live in, you’ll find something to fit the weather.

Beach Skulls have an uncanny knack for delivering killer tunes just when we need it most. We shared their “I’m Not Me” single last month, calling it a “suspenseful hip-shaker” with ‘70s retro vibes. That tune electrified our senses on multiple levels. Now the Manchester-based trio take us deeper into their old-school influences on “Sacred Citrus.”

The flower-power ’60s are alive and well on this banger. Your entire body feels compelled to dance as soon as you hear the groovy opening notes. A tempo shift midway through will have you gyrating until the chorus downshifts your movements to a steady head sway. Picture yourself on a beach blanket in a heady California haze. This is the imagery “Sacred Citrus” evokes in its nearly five perfect minutes. Keep it on repeat for an extended trip into their sun-kissed realm.

Ben Browning is back with a brand new track titled “Sunshine Baby”. The Australian producer and songwriter (and long time member of Cut Copy) has been working on new material and this is his first ever collaboration from fellow Australian Woodes.

The track definitely feels like a welcomed ray of sunshine with a mix of 80s glam and a retro disco feel. The pulsating synth throughout the track and Mr Browning’s smooth vocals along with Woodes’ etheral addition, we have a summer weekend ready track to spin over and over again.

Lyrically it’s a story of a new love and the warmth that comes along with it.“I kept hearing the song in my head as a duet and eventually I added the nu-romantic vocal to tell this story of new love,” Ben says of the track.

“Sunshine Baby” is taken form Ben’s sophomore album Even Though which is available on June 22nd via Yellow Year Records.

A month ago, we were introduced to Britt Rion, whose single, “Chaos & Beauty”, felt like a modern-day fairy tale. The track featured her electronic and producer side, and little did we know there is much more to the Kiwi artist. Specifically, she’s a gifted guitarist, which her first single highlighted in small doses. Her second single, though, reveals this hidden gem’s other talent.

Like her previous track, “Hide” commences gently like a childhood story. It’s enchanting and dreamy at first, and Rion’s saccharine vocals take us to a “secret place where you wait for me”. A place where we “feel a little closer” to the ones we love and the places we call home. Gradually the song develops into an enrapturing piece of dance-pop-rock, where the rainbow is replaced by the glittering colors of the disco ball. As we twirl and dance, Rion breaks out a guitar solo that is – dare we say – a little Prince-esque. The only negative is that the solo is too short. Maybe she’s saving the extended version for her life show, and we hope she’ll be touring around New Zealand soon. Everyone else, in the meantime, should jot her name down because Britt Rion has the potential to join Lorde and Kimbra as Aotearoa’s biggest musical export.

Check out the song’s video, which displays some of the beauty of the North Island. Parts of the video were shot on Rion’s parents’ farm, and the views are gorgeous.

BRAEVES has a new track and it’s another one to add to your upbeat summer playlist titled “Pull Me In”.  It’s been almost two years since we have heard from the band so it’s nice to hear new music from the newly formed quartet.

The addition of new member Scott Goldbaum has been a nice move as the band now has two strong vocalists and a more full-bodied sound. The result of this adjustment allows BRAEVES to bring flawless indie pop to fruition with their newest offering. “Pull Me In” is full of warm summer feels in the form of addicting harmonies, dreamy vocals, driving guitar and perfectly placed keys.

Scott shares a bit about their new track: “Undertaking ‘Pull Me In’ as a band in the recording studio consisted of name changes, lyric rewrites, added bridges, chord reharmonization and the guidance of our producer (Grayson Sanders) in helping us reel in five different perspectives into one uncompromised vision. The patience, trust, and unfiltered creative impulses from the four of us and our producer embodied what I’ve always aspired to have in a pure collaborative process.” 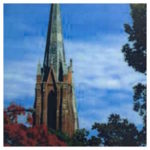 New music from synth-pop wiz John Maus is always cause for celebration. Our ears have been buzzing since he shared his new “Running Man” tune earlier this week. It’s from his Addendum LP, a collection of music not included on his 2017 release, Screen Memories.

As the deliberately pixellated cover art suggests, this tune is designed to prompt your double-take. Beneath its quirky, experimental synth-pop veneer lies a substantive core. While we don’t know if the song is inspired by the Stephen King-based story (and subsequent ‘80s film starring Arnold Schwarzenegger), it certainly fits that genre mold. “Running Man” evokes a futuristic world full of sinister elements. If anyone in Hollywood decides to remake that film, they’d be wise to include this avant-garde gem on the soundtrack.

Addendum is out today via Ribbon Music and Domino Music. It is available for purchase here and streaming from these links. Maus kicks off his European tour next week in Paris. 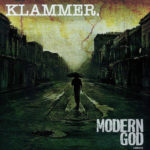 The swirling maelstrom of ‘90s-era dark post-punk has returned in the form of Leeds-based outfit KLAMMER. Their new “Modern God” single channels the brooding ethos of Peter Murphy and Nick Cave while faint Sisters of Mercy-esque echoes ripple throughout.

This tune has elements of an impending storm without becoming destructive. It’s as if these guys want you to know they are capable of conjuring the elements but are choosing to exercise restraint. Sometimes that approach is even more beguiling. In this case, KLAMMER leave you wanting more simply because they didn’t unleash their potential fury. What they do unleash are lyrics steeped in vivid imagery that cast shade on the world’s modern-day unrest:

You can find this track (and their 2016 self-titled release) on Bandcamp.

Rewind the clocks to the late 1970s and imagine yourself in one of Manchester’s or London’s confined and underground dive bars. On the stage walks up some unknown quartet, but they grab everyone’s attention with the dark, propulsive, post-punk. That scene, that sound is what Los Angeles-based photographer and visual artist Jeff Fribourg channels on his musical project Numb.er. Yeah, he’s following Preoccupations’ and Eagulls’ lead in reviving the post-punk of Joy Division, but with his own touches. His previous single, “A Memory Stained”, for instance, had a heavy dose of Gary Numan-esque industrial. On “Numerical Depression”, though, he more closely approaches the Manchester legends.

This number is tantalizingly dark and thrilling. The urgency of the chiming guitar and the percolating rhythms is mesmerizing. The combination will lead punk fans to be hopping around with the most energetic ones starting their own little mosh pit. Fribourg’s vocals, though, sound distant and almost mechanical, as if he’s our computerized subconscious explaining how we’ve become condemned to a life governed by the things around us. Listen intently to his lyrics, which do possess this foreboding message and how so many people suffer from this anxiety to be noticed by people who don’t even know us.

Numb.er ‘s debut album, Goodbye, is out May 25th via Felte.

Before Julia Jacklin became one of Australia’s biggest indie-folk / folk-rock artists, she joined her good mates in a little indie pop-rock band called Phantastic Ferniture. They released a few singles, including the enticing “Gap Year” (which unfortunately is no longer available). There’s probably a good reason for erasing what was done, but at least the now trio are back to (re-)introduce themselves to the world. And boy do they do that and then some with “Fuckin ‘n’ Rollin”.

As one label said on Twitter, this is the song of the summer (or winter Down Under). It is a superb piece of breathtaking, surfy, indie pop. Jacklin, who always has had a great voice, transforms into a younger version of Stevie Nicks, as her vocals reach levels that transcend gorgeous. She also does a killer bass, but musically it’s Liz Hughes’ guitar that steals the show. It doesn’t arrive until later, but when it does it leaves you floating in Cloud 9. Holding everything together is drummer Ryan K Brennan, who steady pulses mirrors one’s accelerating heart beat. Simply delightful. Simply awesome.

With this being the long weekend in Canada and next weekend Americans will get their own 3-day break, plenty of people will be taking a road trip. Just in time, rising Aussie indie-rocker quintet Rolling Blackouts Coastal Fever arrive with the perfect song for the long drive. A tune that will have you rolling down the windows, sticking your head out, and feeling the cool springtime breeze blowing through your hair.

Rousing, urgent, and exhilarating, “An Air Conditioned Man” is that song. Immediately, the five-piece hit you with an uppercut as the guitar and rhythms explode from the start. The track then settles into a semi-fast-paced tempo groove, yet an intensity remains with front man Fran Keaney’s bursting vocals. The storyline mirrors the music, as Keaney describes one man’s panic and realization that he’s lost in this technology-driven, social media-obsessed world. The only thing he can do is drive as far as he can to escape the entrapments of the concrete jungles, which he does in the accompanying video.

Come June 15th, we and many others will be racing to our nearest record store to pick up RBCF’s new album, Hope Downs, which Sub Pop (world) and Ivy League (AUS/NZ) will release. Or simply pre-order the LP here. 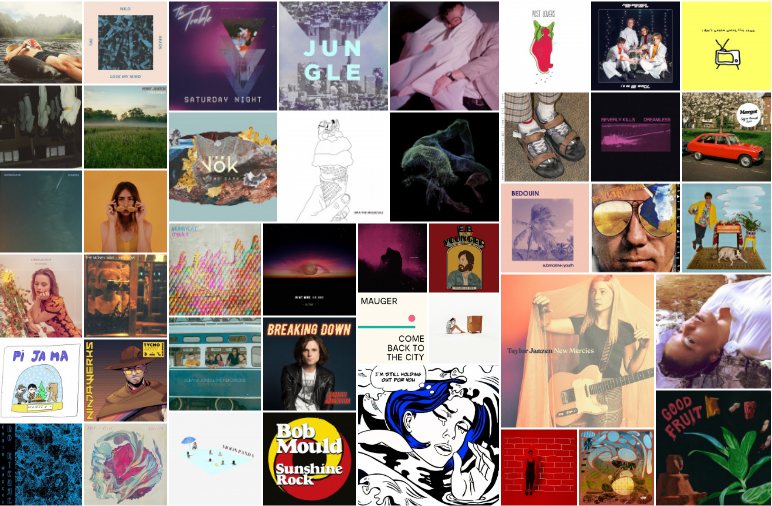