In some cases, The Matinee ’18 June 21st edition dives really deep to share new music. Some names, however, you may recognize from past mini-playlists. Today’s list is in reverse alphabetical order, except for the first track. We have to share the newest single from one of post-rock’s / shoegaze’s great bands first.

By now, most people know that legendary post-rock / shoegazers Mogwai have been creating the music for the upcoming movie, Kin. The sci-fi, futuristic film, which is from the producers of Strangers Things and is out August 31st, follows the path and relationship of two brothers, and their fortunes turn when the younger sibling discovers an alien weapon. If the movie is anything like the acclaimed Netflix show, then movie-goers will be in for a lot of twists, loads of action, and a human story. Further giving clues as to what to expect (besides the trailer) are the songs the Scottish icons have released.

At the end of April, they shared “Donuts”. Late yesterday, they unveiled “We’re Not Done (End Title)”, and it is one of those rare “OMG” moments. The tune is classic Mogwai – ethereal and cathartic, breathtaking and exhilarating, dreamy and inspiring. It’s like we’re floating through space to meet an unknown entity, but instead of fear there is excitement. A feeling of rejuvenation overcomes you, and you’re led to believe you can overcome anything. Accomplish everything. Not many bands can do this, but then again Mogwai are not an ordinary band. They never have been, which is why hundreds of thousands of people, including ourselves, continue to be dazzled by their brilliance.

Sam Valdez is barely a year into her solo career, yet she should be way more popular than she is. With her stunning vocals and a style that that recalls Mazzy Star, Jesse Jo Stark, and Aussie sensation Cloves, she should already be a star. Then again, she’s not making top-40 music or anthems made for the Electric Daisy Carnival. Rather, she’s kind of old-school, preferring to seduce us with Americana-drenched dream-pop and dream-folk songs like “Funeral”.

Like a great Hope Sandoval song, “Funeral” must be heard while sitting down and all distractions removed. It requires your utmost attention, and only then you can follow into the dazzling delirium that is Valdez’s world. Within this track, it is the Mojave Desert at dusk, where the last of the sun’s light turns the arid flatland into a spectacle of brilliant life and color. This is where Valdez takes us, where she walks alone to escapade the maddening world and the places and people that only create pain. Here she proclaims, “I’m loyal to my solitude”, which is one of the great lines in any song this year.

Valdez’s debut EP is expected this summer, and the fine folks at Nevado Music will release it. Maybe then the world will realize how great of a talent the LA-based artist is.

Last month, French psychedelic rock outfit Rosaire released their new album, Crystal Eyes, which sounds more like it came out from the gallows of Austin or Los Angeles. So choosing a song from the record is a difficult one given our collective affection for gritty psychedelic rock. The one tune that stood out, though, is “To The Temple”, which they released nearly four months ago to promote the LP.

This song is epic. Absolutely epic in a The Black Angels way. Like the famed Austin psych band, Rosaire ease us into the track with a methodical banger. Beneath the shallow approach, however, an intensity hums and anticipation, as such, rises. Halfway through, the pace quickens ever so slightly, but Rosaire have yet to deliver the final blow. That arrives with forty seconds left, and the whirlwind of searing guitars and hammering rhythms is mind-blowing to say the least. For over five-and-a-half minutes, we do feel like we are encroaching upon a sacred temple in search of great treasures. When we finally enter, we don’t discover gold, jewels, nor the Holy Grail. Instead, we’ve discovered one heck of a band who should one day be touring with The Black Angels, Black Rebel Motorcycle Club, and other legends of their craft.

Rosaire’s new album is available on Bandcamp. Go get it!

Another under-the-radar band who recently released their debut album are Braziian quartet Oxy. On June 6th, they unveiled Fita, which is ten songs of stunning dream-pop and dreamgaze. Think Alvvays meets Lush with touches of the energetic pop of South Korean feel-good-story band Say Sue Me, and that is Oxy in a nutshell. One of the songs highlights is “Realdaze”, which will, well, leave you in a daze.

Like Alvvays, the Brasília-based four-piece deliver a sun-drenched tune that leaves you warm and fuzzy inside. On the outside, though, the jittery melody and jangly guitar riffs have you gently swaying if not dancing in spot. But if you really let yourself go, you’ll find yourself spinning during the moments the song reaches its ethereal heights. When the jangly guitars transform into the sounds of shoegaze heaven and front woman Sara Cândido’s stirring vocals surround you. Listen closely, however, to her lyrics, as she offers words of encouragement and proclaims her belief and trust in us. By the time the song ends, you, too, might be shouting out loud in the direction of Brazil, “I choose you”.

The UK is drowning with great indie-rock bands. Not that we’re complaining, but the region’s wealth in this genre makes it difficult to share every great song that comes across our inboxes, streams, or searches. Take for instance, Of Empires‘ latest number, “Suzie”, which was released back in May. We have no excuses for not sharing this single earlier other than we flat out whiffed. Better late than never, right?

Like holy moly this song absolutely rocks. Akin to the great rock bands from the ’70s, Of Empires have not just delivered a great song, but they’ve crafted a brilliant, cinematic fare. The twangy, psychedelic-drenched guitar riffs and the groovy rhythms re-create the mood found in the hot, arid regions of the US’s southwest, where Josey Wales once roamed freely. He isn’t seeking revenge nor hunting down other outlaws, but he’s trying either to win back Suzie or escape her charming grasp (or maybe both). What happens is unknown, but the final worlds give us the indication our hero is still moving and waiting for that one last blow from Suzie. Now the title character may not land the final punch, but Of Empires certainly deliver a knockout punch with this track. The ending, in particular, is outstanding.

Of Empires are George Le Page (drums), Matthew Berry (guitar), Jack Fletcher (vocals), and Liam Bewey (bass). We need to see this band live before we take the long sleep.

Over the years, Miya Folick has consistently mesmerized us with bold social anthems and introspective songs of redemption. Usually, however, she did through the spectrum of indie and alternative rock. For “Stock Image”, however, she changes pace and takes us down a different path.

Forget the searing guitars and raging riffs. Folick has channeled her inner synth-pop queen and delivered a majestic number. The song teeters the line of mainstream electro-pop, and just as you think she’s going to fall off the edge she reins it back. So instead of a club-friendly number, she takes the track back to the future and into the ’80s. Her voice, as always, is powerful and lush, stirring your soul every time she it soars. Her words, too, firmly grab hold, as she takes us that we are more than what we appear. That our images don’t define us, but rather the person we are inside is what make us. Folick, though, is everything she appears and sounds – an unstoppable force who is destined for greatness.

We don’t know really anything about Laura Butula, other than that she has a sizable Instagram following. There really isn’t a whole lot of information on the Moscow resident. She did release an n EP, Tilted, in 2017 that is a mix of jazz, pop, and R&B. Other than that, we cannot tell you much about her. Her relative anonymity, though, will likely be short lived because once people hear her saccharine voice and ’60s-style R&B, they will be flocking on to her bandwagon.

The scratchy, lo-fi recording on “Orange Juice” reflects the bygone eras she’s trying to resurrect, specifically when Marvin Gaye and Tammi Terrell sang sweet-nothings into her ears. The song is sexy and seductive personified, but “Orange Juice” is more than just a relationship song. It’s a song of redemption, rejuvenation, and understanding. As Butula sings:

“Days pass me by left my life somewhere behind.
Games I was trying one more time.”

It’s the perfect track to accompany one during a late-night drive or a lonely walk, offering a soothing melody for one to reflect on what has happened and what is to come. What awaits the young Russian singer-songwriter is unknown, but we wouldn’t be surprised if a record label like Spacebomb snatched her up.

With a name like Drunk Mums you know the band had to be from Australia. After all, the country has given us King Gizzard and The Lizard Wizard, DZ Deathrays, Dune Rats, and other amusing band names. Like these aforementioned bands, the Melbourne-based quartet create some groovy, fun, and energetic music – specifically garage surf-rock. Not surprisingly, the quartet of Jake Doyle (guitar/vocals), Dean Whitby (guitar/vocals), Jonny Badlove (drums/vocals), and Adam Ritchie (bass/vocals) are national icons. If this your first introduction to the band, then their newest single, “Roll With The Punches”, is the perfect place to start.

“Roll With The Punches” is just one groovy, summery, fun-loving tune. The power-pop guitar riffs are infectious, and the multi-part harmonies give the feeling of one big sing-along. In many ways, this song is an anthem for everyone who has had to beat the odds, battle bullies, or prove to the naysayers that you can do it.

“Do anything you want to do.
Not what somebody tells you to.
It’s all right if things don’t go your way.
There’s always another day.

Alternatively, just gather your mates, head to the beach, and blast this tune as the fire blazes under the stars and get everyone dancing.

It has been a year since Leeds post-punk outfit Dead Naked Hippies graced us with their presence. At the time, they blew our minds with “Drain You”, which we described “as a full-frontal assault”. That song also made us take serious notice of the Leeds-based trio and their potential to follow Eagulls, Estrons, and Shame in being recognized as the present and future of UK’s rock scene. Their latest single, though, demonstrates a different side to their last bombshell.

Lucy Jowett, Joe Clarke, and Jacob Marston slightly turn down the volume, but the emotional and urgent intensity remains on “Guillotine”. The track’s deliberate pacing drives the tune and gives it a hunger that other post-punk numbers lack. As the grizzled guitar bursts and chimes and the rhythms maintain a focused and linear approach, Jowett’s vocals sway from seductive to desperate. Her voice is that of a woman that has struggled to live her life and is now on the repair. That of a woman hungry to take control in a chaotic, uncertain, and unpredictable world. And this band is the one to lead the way.

Dead Naked Hippies are playing a handful of shows across the UK this summer. Dates and information are available here. 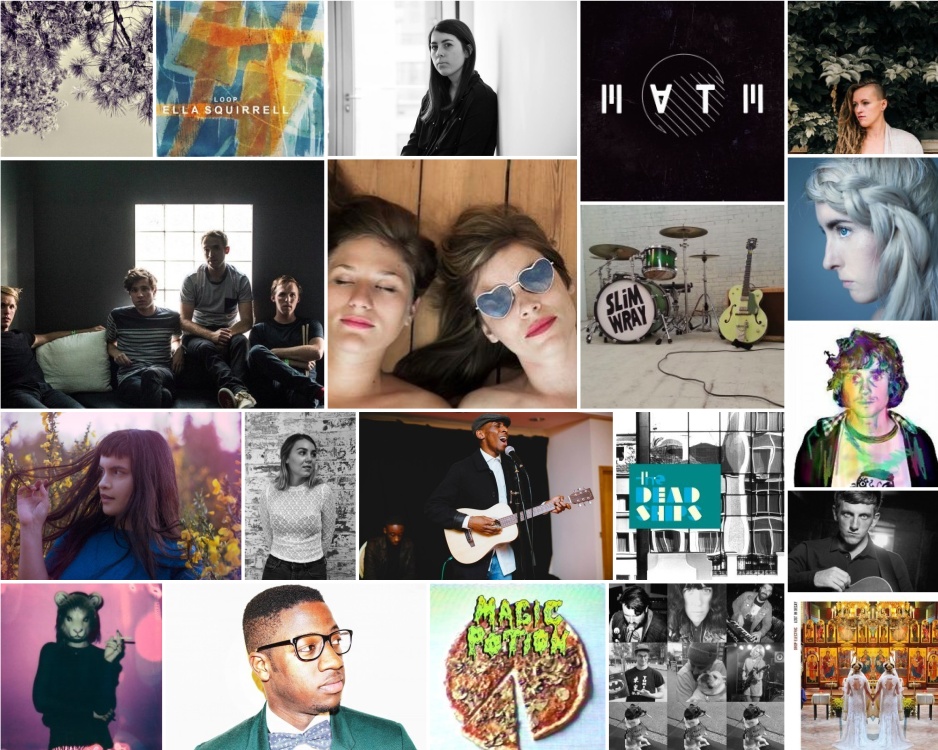