The Matinee ’18 July 6th edition features nine tracks that will get the blood flowing as well as leave you in awe. Dance, rock out, or gently groove in your seat – either way today’s mini-playlist is a mover and a shaker.

Do you have a go-to song that motivates you when you’re down? If so, you should add “Warriors” from American indie soul-man Allen Stone right now. It’s the feel-good tune of the summer with an infectious groove sure to pull you out of any slump.

“Warriors” is the result of a writing slump Stone experienced. Despite feeling uninspired, the Washington state native kept trying. This uplifting anthem speaks to the struggles we all encounter and reminds us that victory is the product of persistence. His soulful voice (combined here with a funky bass riff) offers these words of encouragement:

“We don’t run from our opponents
Even when we’re close to broken
There is nothing to defeat us
Dedication it will lead us.”

Stone has been working on a follow-up to his 2015 hit LP, Radius, and this single – produced by British soul singer Jamie Lidell – is expected to be included. “Warrior” is available now via ATO Records from these streaming and purchase links. Stone’s upcoming autumn tour kicks off October 11 in Portland, Oregon.

It’s not often we come across an artist that leaves us dumbfounded in trying to describe her sound or compare her to a more established musician or performer. That’s when we, as music listeners and fans, know we’ve struck gold and discovered someone who makes us believe innovation is still possible. Her name is simply Aurelia, who, despite her Grammy-nominated credentials, has crafted a piece of sensational art.

The installation is called “AMERICA”, and it is breathtakingly gorgeous. A song that is so remarkable that it should be displayed at the Museum of Contemporary Art Australia in Sydney or the Tate Modern in London. It is one part a cosmic wonderland akin to the spatial strokes of Portishead and Sigur Rós mixed with the theatrical, ethereal enchantment of Björk and Kate Bush. Although musically the song sounds like it comes from a different dimension, her lyrics and inspiration are firmly grounded on Earth. Specifically, Aurelia pays tribute to the greatness that still exists in the USA and its potential to once reawaken as the great country it once was. It’s also an ode to people like her, who awaken one day to feel rejuvenated and inspired. To become something, someone that leaves us in complete awe.

In a short time, 24-year old producer Jakob Bjørn Hansen – a.k.a. Bearson – has emerged as a juggernaut on the electronic and EDM scene. No wonder he has artists lining up to collaborate with him, and the latest is LA singer-songwriter MNDR. Together they deliver a little summer heat with “I Only Need One”.

As Bearson’s soft dubs and beats pop in the background to create the sultry, tropical vibes, MNDR – whose actual name is Amanda Lucille Warner – lushly explains how all she needs is the kiss of one. It’s like the Princess and the Frog story or Sleeping Beauty, where true love’s kiss will make everything perfect. Where that one touch is all you need to be reinvigorated, awakened, and to have that burning desire in all of us rekindled. So as you spin this tune on the beach or in the confines of your home, be sure to hold that one person close and allow the temperature rise.

The song is out on Bearson’s own label, Next Wave Records. His new album is expected some time this year.

It wasn’t long ago when the Billboard and Top 40 charts were littered with multilingual artists. While some have found success in other languages besides English, they are a rare breed. This makes the return of Héloïse Letissier’s project – Christine and the Queens – an exciting development. What makes her truly unique is that she doesn’t record her songs in one language (the default position of many artists today) but offers them in both French and English. She doesn’t take any shortcuts, offering her fans in her native France and those abroad their choice. No wonder she catapulted into a global sensation following her brilliant 2014 album, Chaleur humaine (re-released with English cuts in 2016). Her newest song cements her as one of the world’s great artists.

“Doesn’t Matter” is disco-pop brilliance. It chimes with the sounds of ’70s roller rinks while possessing the grace and sultriness heard in Europe’s most exclusive clubs. This is a tune that would make wearing sequins while roller skating a cool fashion trend. The subdued arrangements are smartly executed to allow Letissier’s voice and lyrics to shine. Beneath the disco vibes, Letissier delivers a powerful message about one’s purpose in this world and the value of one’s life. It’s an incredibly revealing song from an artist who has stayed out of the spotlight.

The song is taken from Christine and the Queens’ new album, CHRIS, which is out September 21st via Because Music.

We need to find ourselves a Delorean and send brothers Andrew and James Stone – a.k.a. Lusts – back to the ’80s. Then maybe the underrated duo will get the attention they deserve for their mix of pulsating post-punk and delirious New Wave. They’re basically New Order and The Cure rolled into one formidable package, and their latest tune, “lost highway”, reveals their creative genius.

The throbbing bass line, the crystalline synths, and the transcendent dual vocals create an early morning atmosphere, where the stars are overwhelmed by the city’s lights and only the nocturnal roam. Through the deserted streets and vast freeways we travel, lost in the darkness and the thoughts that flood our minds. It’s a stunningly sinister track that is perfect for any late-night journey.

The song, however, holds a much deeper meaning. As Andrew explains:

“‘lost highway’ is an idealized and romanticized vision. It’s about finding a place where no-one knows who you are, your past, or your future. It is partially inspired by Jean Baudrillard’s book ‘America’ and his observations as he travels across the country. The quote – ‘Driving is a spectacular form of amnesia. Everything is to be discovered, everything to be obliterated’ – resonated with us and made us want to create this track. It’s about the everything and nothing-ness of escape.”

There are so many great indie-rock bands in the UK that many remain unsigned. It’s not that labels are missing out on them, but rather there just aren’t enough labels. One such group is Mellor, who have developed a well-deserved reputation as an awesome live band. When hearing their latest number, “Safe Word”, is pretty easy to understand why.

The song screams, “Get up and get moving!” It is right out of modern-day indie Brit-rock songbook – a sonic explosion filled with blistering riffs, catchy melodies, and walloping vocals. Even if you’re not the dancing or bouncing type, there’s no way you can stay seated. You’ll be up and at the very least nodding your head, tapping your foot, and wailing on your air guitar or invisible drum kit. This tune is that catchy. Even the lyrics are a bit fun, as the guys admit they’re a sucker for another person’s love. After hearing this tune, you just might become a sucker for everything Mellor do from now on. You might even set the tune as your wake-up music because it’s an energizer.

The band is comprised of Gary, Sam, Kris, and Josh. Their new album, Safe Word, is out August 17th.

The glory of the ’80s is alive and kicking on this delicious slice of retro-inspired indie pop from Moonbeau. The Ohio-based duo of Claire Muenchen and Christian Gough channel New Wave synth-pop masters like Yaz and Thompson Twins on their new “Like the Night” single.

From the first notes evoke Vince Clarke’s bouncy melodies to the ethereal Alison Moyet-esque harmonies, this tune keeps you locked in a euphoric embrace. In fact, the inspiration for the song comes from the rush of intoxicating feelings that overwhelm you when you fall for someone new. Moonbeau capture the excitement of those high-energy days in this nearly four-minute pop gem. In the process, they also take you back to the days of your first teenage crush when thoughts like these raced through your head 24/7:

The band’s self-titled debut album is due September 7 via Old Flame Records. You can pre-order it or get the single now from iTunes.

Some 16 months ago, young Liverpudlians SPINN grabbed our attention with the sugary earworm, “Home”. Since then we’ve been hooked, as have a couple of thousand fans. That’s saying quite a bit given the four-piece are still teenagers, which means their future is immensely bright. Pretty soon, they will achieve a huge breakout because despite their age they craft immensely thoughtful songs that not even artists twice their age can write. Their newest effort, “It’s Not Getting Better”, is further proof of their talent and maturity.

From the clean, chiming guitar riffs to the stellar, probing bass line to the punchy drum line, the music is superb. It is simultaneously relaxing and engrossing like the calm that follows the passing of a storm. Yet in Jonathon Quinn’s withdrawn vocals and introspective lyrics, another storm brews inside the protagonist. A struggle our hero keeps hidden from everyone else, and the constant bad news only adds to his turmoil. His lyrics are moving, and they remind us to look for clues because even if our friends say they’re fine, they may be suffering inside. Again, these guys are just teens writing meaningful, considerate music. No wonder we’re fans.

In the short time we’ve had to appreciate the music of Thee MVPs, we’ve learned one thing very quickly – everything Charlie Wyatt, Alex Ives, Josefine Jonsson, and George Rothman do is done at 100 MPH. The London-based quartet don’t know how to slow down, which is just fine for us in this day and age where people believe guitar-driven music is dead. Proving everyone wrong, they dial up the intensity several notches and blast out a manic rocker with “American Dreamin'”.

This tune is ’90s college-radio rock ‘n roll perfected. It is fast, furious, infectious, and one whale of a joyride, where all the passengers are unabashedly banging their heads, punching the air, and completely losing their shit. Everything about this tune is awesome – the feisty, dueling guitars, the throbbing rhythms, and the awesome keys at the end. The decision to go with an old-school rocker is intentional because the lyrics, which were written by Joel Currie, reveal an unwavering belief that America is still the land of the free and the land of opportunity. That deep in the heart of the USA, the American Dream still lives. 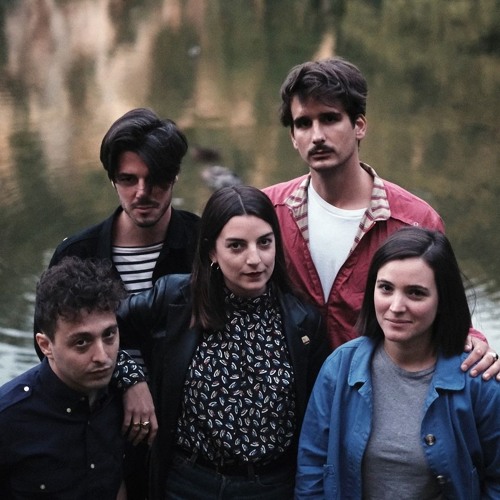