With all the great music coming out, we’ve divided The Matinee into two parts once again. We head Down Under with the The Matinee ’18 August 20th – Australia Edition. Granted, one artist now calls England home, but he’s Aussie born. Anyway, the six songs featured below span a broad section of genres – folk-pop, dystopian future rock, downtempo trip-hop, dark orchestral-pop, and psychedelic rock. In other words, this mini-playlist highlights the vast diversity of music being created in the country.

For more music, check out the ROW (or Rest of the World) Edition here.

It’s the dog days of summer in the Northern Hemisphere, and we all could use a song that just brings a smile to our face with its catchy melody, light-hearted storyline, and smooth vocals. Fortunately, singer-songwriter Calan Mai delivered the perfect slice of summertime Americana about three weeks ago with his new single, “XO”.

The chorus – “If you get home before I do, it won’t be long before I do” – will stick in your head for days and have you grinning for a very long time. These fourteen words mean so much – that love awaits for us at the end of the day, there’s no place like home, and on and on. Mai’s message, however, is much more than this. He tells the story of a young man trying to make his way through the convoluted world. From love to employment to finding meaning in this world, Mai brilliantly describes how it is difficult to continue to believe in oneself. Fortunately, tomorrow is another day to conquer the world, which Mai will one day do especially if continue to share the perfect summer tune – one that warms the heart while cooling the soul.

Let’s be honest – most bands and artists play it safe when it comes to writing songs and entire albums. There’s not a whole lot of ingenuity, as the focus is primarily on monetizing songs instead of pushing the creative envelope. There are, of course, exceptions, such as Aussie outfit Hey Geronimo. Their new album, Content, promises to not be a run-of-the-mill record, where the focus won’t be on love and heartbreak. The first single, “Disconnect”, offered a hint of what to expect – a record that revolves around the dehumanizing of humanity as technology plays an increasing role in our lives. Song two further validates that the Brisbane trio could very well deliver the year’s most clever LP.

“Working For Google” continues this spiral journey into The Matrix. Part synth-rock, part psychedelic-rock, Hey Geronimo take us on a topsy turvy ride, making us feel like Neo after he took the blue pill. This world is funky, groovy, sporadic, and zany, and most importantly it is eye-opening. The trio describe how we are all working for companies like Google, as we stay glued to our computers and phones to watch the latest video on YouTube, stream posts and images on Instagram and Facebook, or look up ideas on our favorite search engine. All the while the companies are collecting information about our habits, and algorithms are in constant motion to determine what we might like next. We may not know it, but each day the world is indeed becoming more mechanized and predictable, including what our humanity.

Content is out September 7th. Pre-order it on Bandcamp.

Little Quirks – “I Told You So” (Central Coast, Australia)

Sisters Abbey (vocals/guitar) and Mia (drums) and cousin Jaymi (vocals/mandolin) first caught our attention on Halloween of 2017, showcasing their warm and infectious brand of indie-folk and folk-pop. Since that time, the family trio have seen their popularity grow two-fold and they’ve become one of eastern Australia’s most sought-after new bands. Granted, Little Quirks aren’t exactly a new band since they’ve been playing together for over three years – when all three were still in middle school. Heck, we don’t even think they’re old enough to vote or even drive (we’re pretty sure Mia is definitely not old enough). However, their music, such as their latest single “I Told You So”, indicates a maturity well beyond their youth.

“I Told You So” is classic folk-pop. It is charming, vibrant, and addictive, making one think of First Aid Kit and The Staves in their infancy. The harmonies are gorgeous with Abbey leading the way. Meanwhile, Jaymi’s mandolin, which gently tickles the air, stirs the musical drink, which will leave all those listening in a merry mood. Despite the jovial atmosphere, there is a little spunk in their lyrics, as they seem to be saying to all the non-believers that they’ve made it. Indeed, they certainly have, and we cannot wait to see them at a future Newport Folk Festival or Pickathon.

Seven years ago, Louise Marshall would have personified the term, “child prodigy”. At the time, she was just 14 years old and already writing performing her own songs. Now, she’s a rising star within the Aussie scene, possessing a heart-stopping voice and a musical style that would make Adele, Sarah Brightman, and Lykke Li stop and take notice. Brooding dark pop, haunting indie-folk, cinematic indie – call it whatever you want but there’s no doubting the young South Australian’s talent and brilliance, which are captured on “Ocean”.

Dim the lights and pull down the shades and become completely immersed in this stunning number. The minimalist approach gives the track a dark yet shimmering feeling, akin to the experience of swimming in a dark cave where only the faintest light can be seen. Marshall’s vocals, meanwhile, echo within the watery caverns, reverberating with the graceful intensity of Florence Welch, Lykke Li, or fellow Aussie Gordi. Hers is a voice that lingers with you long after the final string and synth disappears. If that wasn’t enough, her story of depression and self-destruction while the world crumbles around her will leave you weak in the knees.

“Ocean” is taken from Marshall’s EP, Juvenile, which is out on The A&R Department. Streaming and purchase links are here.

This song rocks. Absolutely, frickin’ rock! It is propulsive, groovy, explosive, and highly addictive. It’s like taking an all-natural hallucinogenic, except you don’t have to ingest nor inhale anything and there are no lingering after effects. Well, you might get a massive headache or a sore neck from feverishly thrusting your head back and forth to the raging guitar riffs and the hammering rhythms. You might also sprain your elbow or shoulder due to the constant fist pumping. But it will be all worth it because “Social Candy” is one of those rare treats that deserves a massive, “F*ck yeah!”, which we haven’t said for a long time

The song is out on What Reality? Records. The quartet have a series of tour dates in Europe and Australia coming up, and more information can be found here.

Two People – “Something To Talk About” (Melbourne, Australia)

The great city of Melbourne is one of the world’s great cultural cities. It has the perfect mix of food, wine, theater, music, art, and sports, and every person should visit it once. Its music scene, though, remains extremely underappreciated, but look up its history and you’ll discover an endless list of influential bands and artists that cross all genres. Melbourne is also home to Australia’s most vibrant indie scene in our humble opinions, and one of the bands that contributed to our conclusion is Two People.

The project of Phoebe Lou and Joey Clough is a mix between Purity Ring, Maribou State, Massive Attack, and fellow duos Kllo and De̊ǰa. For a couple of years, they’ve tantalized. This time around, they’ve seduced us with “Something To Talk About”, which is a gorgeous piece of trip-hop. Dark yet immersive, hypnotic yet sensual, the track would fit perfectly within Massive Attack’s vast musical tome or on the next Maribou State record. The production work is outstanding, and the piano interlude adds to the song’s intimacy and suspense. Lou’s vocals, meanwhile, are distant yet heavenly, whispering in our ears like our conscience and offering one final piece of advice. Offering a few words for us to contemplate before we do anything drastic.

The single is out on Liberation Records. Their debut album is expected in the very near future. 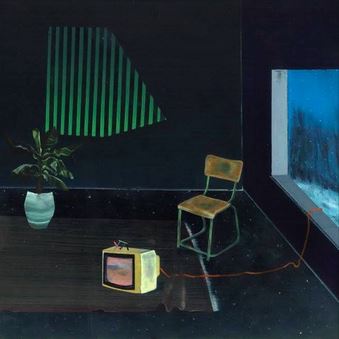