We’re offering another double dip of new music. The Matinee ’18 August 28th – Rock Edition will may cause some sensory overload, but we guarantee the six songs will energize you. Some may even make you laugh, and others will cause you to slow down (you’ll understand what this mean as you read more below).

For the second half of The Matinee, click this link to be taken to the “Roll Edition”.

RIYL: Gang of Youths, Nothing But Thieves, The Hunna

There may not be another country that possesses the range and diversity of outstanding artists and bands like Australia. This isn’t to undermine what is happening in England, Scotland, the US, Canada, Sweden, Norway, or any other nation that has a rich indie scene. The big place Down Under just happens to foster talent across the board. It’s the new home of psychedelic rock, and it has some of – if not THE – best singer-songwriters on the planet. The electronic scene is bursting with talent, and Australians are taking hip-hop and R&B to innovative places. Where the country truly excels, however, is in the area of anthemic, alternative art-rock. Gang of Youths are the most well-known group, but CREO is another name to remember.

When they released “Give Me Yours” a year ago, the song was a boisterous indie-pop tune that sounded like a choir had exploded inside it. On their latest go-around, “In The Red”, they stick more to a more linear path without sacrificing any of the energy or urgency of their past efforts.

“In The Red” is a cathartic and ecstatic number that will get you out of your seat. The immediate pounding of the rhythms and the exhilarating guitar riffs form an adrenaline-boosting soundscape while front man Jorjee Haman’s roars with the desperation of a man seeking to be reunited with a loved one or his family. His shrill at the two-minute mark will send chills down your spine, as all his suffering and suffocation are released in that one moment. This tune, though, is more than just pain and hardship. It is a story, a song about perseverance and relentlessly pursuing life’s indispensable moments and emotions.

The Dirty Nil – “I Don’t Want That Phone Call” (Dundas, ON, Canada)

It would be simple for The Dirty Nil to just follow the overly-used musical template and write songs about the same usual things with lyrics that are repeated thirty or more times. But then again, they have the old-school, Canadian, rock mentality that music provides an important medium to discuss critical issues and share uplifting messages. On “Bathed In Light”, for instance, they encouraged us to shoot for the stars and live each day like it was our last. For Luke Bentham (guitar/vocals), Kyle Fisher (drums), and Ross Miller’s (bass/vocals) newest single, however, they tackle a serious topic with an unwavering intensity.

“I Don’t Want That Phone Call” is through and through a raging rock tune reminiscent of the alternative scene of the late ’90s and early ’00s. Every element is thunderous, as if the trio are waging war like the Gods in the skies with the pounding to be heard and felt on Earth. The song, however, is more powerful than the sonic explosions The Dirty Nil deliver. Bentham’s voice is a piercing and emotive wail, as he tries to awaken his friend from his latest binge and resulting stupor.

“You almost died, five or six times!
You said you’s straighten out after your DUI
‘Cause no one should ever have to call their fate,
Death by drugs and alcohol at 28!”

The Dirty Nil’s new album, Master Volume, is out September 14th on Dine Alone Records. Too bad it wasn’t released a week earlier because it has the makings of a great long weekend record.

It might be Tuesday, but there’s no reason to wait until Friday to break loose and escape for a little while. In our humble opinions, every day should include a moment of reprieve, and we’re not referring to the fifteen-minute coffee breaks and half-our lunches. Rather, these are times where you can truly be yourself and rip open your shirt to reveal The Ramones t-shirt you’re adorning. Such occasions requires an anthem, and Danish trio The Entrepreneurs deliver the goods with “Joaquin”.

The single is a whirlwind of sound, texture, and emotions. It commences with a feverish pitch with a blustery bass line and jangly guitar riffs. Front man Mathias Bertelsen’s vocals are frenetic at first, as he encourages us to follow him and “get away”. Then something unexpected happens – the song slows to a near crawl and a hazy, dreamy vibe fills the air. This solemn bridge provides a moment to reflect on what we truly want to do next – return to our ordinary lives or something we really want to do? We think we know what The Entrepreneurs’ answer would be. Are you willing to follow them?

Mathias Bertelsen (lead vocals/guitar), Anders Hvass (backing vox/bass), and Jonas Wetterslev (drums) are The Entrepreneurs. The song is the lead track from their forthcoming album, Noise & Romance. It drops February 1st, 2019 on Tambourhinoceros. Pre-order it on Bandcamp.

It has been a little while since anyone has heard from Swedish post-punk / alternative-rock noise-makers FEWS. Fourteen months to be exact, which is when they re-imagined Gary Numan’s classic, “Metal”. The quartet are back, and this time they’re armed with an original song that is, in a word, mind-boggling.

“Business Man” is mind-boggling in that it defines categorization. It is chaotic yet cathartic, and one roller coaster of a number. It is part psychedelic rock, part new wave, part post-punk, and even part art-rock, and the outcome is one cracker of a single. Every element – the angular guitar, the harsh rhythms, and front man Frederick Rundqvist’s varying vocals – seems to collide with the next, yet the convergence yields explosive fireworks that light up one’s mind. Frenetic head noodling and fist-pumping are sure to follow, and maybe a mosh pit might break out if you’re with a bunch of friends.

The herky-jerky, roller-coaster approach also provides the perfect canvas for this story about the 9-to-5 office worker, who every day wears the perfect suit and manicures his hair. After years of walking the corporate line, there comes a time that one has “to cut the cord, please” and let go. To say screw the establishment and reclaim one’s life and live out his dreams. The lyrics are awesome, and the band’s advise is one to which we all should adhere.

The single is out now on PIAS. No word on whether the band’s sophomore album and follow-up to the awesome MEANS is in the works, but we’re hoping that it is.

The great Ron Gallo. While the Nashville-based artist is still growing his fan base (which has substantially increased in the last 6 months thanks to his constant touring), anyone who has listened to his records or seen him live will agree he and his band mates – Joe Bisirri (bass/vocals/keys) and Dylan Sevey (drums/vocals/percussion) – are one of the great rock outfits around. It’s not just that they put all their energy into their shows, have great banter while on stage, or deliver hooks straight out of the ’60s and ’70s. Gallo also has a witty and often satirical lyrical approach. All these traits are showcased on “Always Elsewhere”.

Well, not everything since we cannot directly see him performing the song live, but it’s easy to imagine him, Bisirri, and Sevey just walloping their instruments with little regard to their condition. Given the frenetic, stuttering energy of the track, it’s also easy to completely lose yourself in the rollicking approach, bopping around like a jitterbug and building up a sweat. However, listen close to what he has to say because Gallo tackles the incessant urge and need of people to immediately post things on social media and to be the first ones to obtain a product. Technology has turned us all into addicts, where we want the quick fix without fully experiencing what is in front of us and what is real.

And start with this song to slow down and enjoy the craft and brilliance of one of America’s great young rockers and singer-songwriters. Listen, feel, and experience.

Have you ever spent time at an arcade and watch someone completely annihilate a pinball machine, where they play for over an hour and rack up multiple free games? If you have, then you, like us, probably have wondered how s/he could stand in one place for hours without taking a drink or going to the loo. Fortunately, we’re not the only ones who contemplated this non-consequential issue, as Sydney rockers The Vitriots have written a song about it.

Specifically, they deliver a ’90s, Brit-rock-infused number in “Pinball Wizard”, and it’s awesome. Reminiscent of Blur and Supergrass in their early days, Brandon Jack, Richard Heath, Jaxon Brown, and David Sayah unleash blistering biffs and nuclear nudges (that’s pinball slang). The guitars are fiery, the rhythms are bone-jarring, and Brandon Jack’s wail is a cross between Liam Gallagher and Damon Albarn. His lyrics, though, have the latter’s bite, as he talks about the pinhead’s oversized ego. There are memorable lines throughout, such as:

“You’re infatuated by the appearance you’ve created,
It’s overstated, but I think your fame is tainted by the idea
That the world rotates around you
And I’m surrounded by pigeons the same.
And I just can’t understand
That you think you’re the perfect man.
Where does the ego come from?”

Of course in this day and age where video game players can make hundreds of thousands of dollars via YouTube videos, the most mundane and inconsequential skill can lead to fame and wealth.

“Pinball Wizard” is the third single from The Vitriots’ upcoming debut EP. Sureshaker Music will release it. 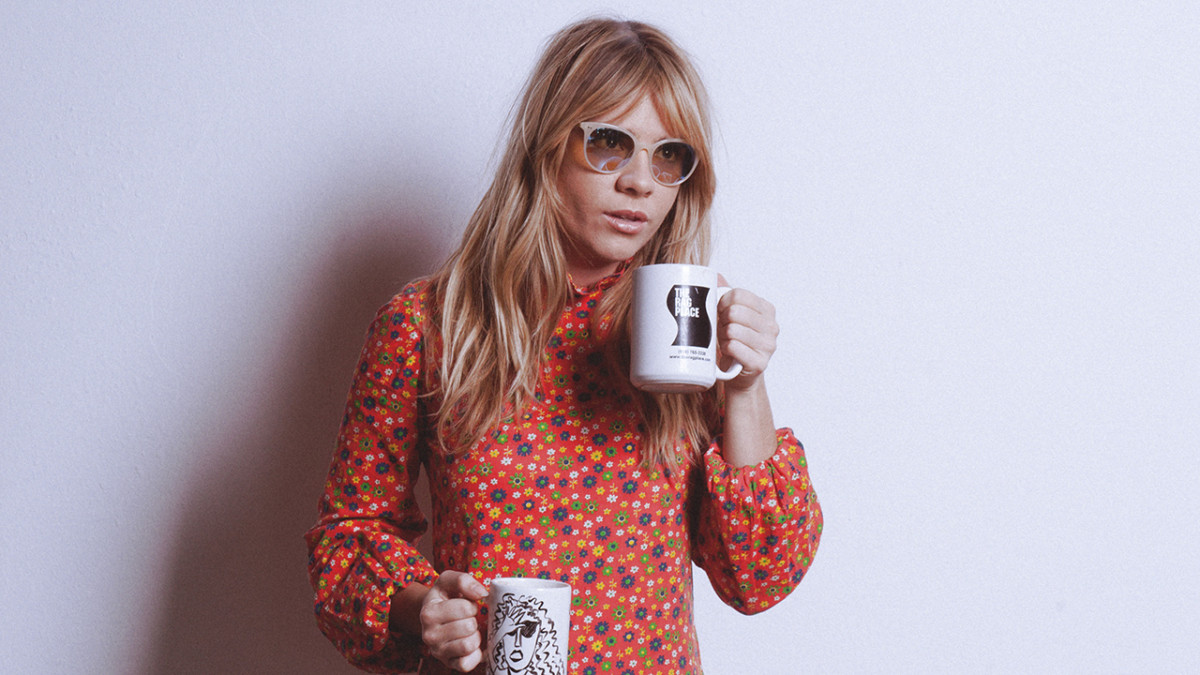