The Matinee ’18 September 18th – USA edition includes songs from artists residing across the country. For instance, one artist is Swedish, but she now calls California home. There is a bit of everything, including one of the most beautiful songs of the year. To hear the seven songs on the Europe edition, click here.

Anyone who has followed the punk scene in New York City knows it has many sides. It is not a stagnant genre, which included the gritty, garage-infused approach of The Ramones and New York Dolls, Blondie’s pulsating darkness, the hyperactivity and ferociousness of Skarhead, and the methodical post-punk tones of Interpol. There are probably another four or five sub-genres missing from this list (like the Talking Heads’ early works). Another one may need to be added to describe Big Bliss‘ approach to post-punk, particularly when describing their awesome new single “Constants”.

The song is a mélange of many sounds that have come and gone in NYC as well as overseas, particularly in the UK. The melodic approach and steady vocals echo the aforementioned Interpol, yet the glimmering bass line beckons of the hollow tones of The Cure’s Gothic interpretation. Then there is the ringing guitar line that will take people to Manchester and the mid- to late ’70s when Joy Division reigned and then later became New Order. Whereas most post-punk tunes wade in dark corners, “Constant” glistens with a surprising brightness, creating a song that is as much as an ear-worm as it is a gripping, mind-altering track.

We hope you’re sitting in a room with a great view right now because this next tune is the soundtrack for this moment. Even if you don’t have a great view, you will still be left breathless. We guarantee it. So first take a deep breath and then hit play. Now let the immaculate beauty of composer, producer, and sound designer Cyrus Reynolds‘ newest single, “Foraker”, steal you away.

Featuring the superb vocals of the great S. Carey, who is a long-time favorite of ours and known for his solo work as well as being in Bon Iver, the song redefines ethereal beauty. Reynolds’ arrangements and production work are simply dazzling, where every movement leaves chills down your back. Carey’s stunning vocals, meanwhile, accentuate the track’s beauty, sending it well above the peaks he refers to and into the heavens. (Actually the song is, as Reynolds states, “a love letter to my wife, harpist Lara Somogyi, and set in the Denali region of Alaska through the eyes of a wayward traveler”.)  It is just gorgeous and arguably the most beautiful song of 2018. If you find something more stunning than this one, please let us know (and good luck with that).

The single is out on Dumont Dumont. Here’s hoping Reynolds will release more music in the future.

Death Valley Girls are one of the greatest bands that not enough people talk about. There is no debating this fact – yes fact, not opinion. They are one of the best live bands on the planet, and their music is the perfect combination of blistering, psychedelic witch-rock and thoughtful, often brutally honest songwriting. Unfortunately for Bonnie Bloomgarden (vocals/guitar), The Kid (a.k.a. Laura Kelsey) (drums/vocals), Nikki Pickle (bass/vocals), and Larry Schemel (guitar), they exist in a time where pop, R&B, hip hop, and even country music take center stage. If they existed twenty-five years ago, we would likely be telling a different story.

Still, there is always a place for a band that is willing to go against the grain and share meaningful messages, and they do this with “More Dead”. The music is prototypical DVG – heavy, edgy, and chest-pounding exhilarating. It is even a bit chaotic in order to reflect the struggles of millions of people who suffer from mental illness, such as depression. The lyrics are profound and powerful, particularly when they holler:

“You feel out of place
Rather be in the grave,
Out of sight, out of the dark,
You’re more dead than alive.”

The video for the track, which is below, is well worth watching.

As FIDLAR, Zac Carper, Max Kuehn, Elvis Kuehn, and Brandon Schwartzel have tended to write songs that either are just fun and exhilarating or about what it’s like to be a young person in America. They’ve mostly shied away from turning into a politically-charged punk band, although some of their songs possess clever social commentary. Well, with “Too Real”, they reveal a new side to themselves. They haven’t just dip their toes into the political pool; they’ve launched an immensed cannonball.

Charged with their typical adrenaline-fueld punk rock, “Too Real” is a monster of a track. It is hard, heavy, and dark, exploding like the seismic thunder during a menacing storm. It’s not, however, the harrowing guitars nor the hammering rhythms doing the duties. Instead, the band’s lyrics are the center of the storm, as they tackle everything from the rising alt-right extremism in the US to the growing gap between rich and poor to the bands that have sold out for fame and wealth. There is no shortage of lyrical gems on this one, such as:

If this is the new FIDLAR, then we cannot wait to hear what their their album has in store. It reportedly is finished, but details, including its ETA, are sparse right now. All we know is that the fine folks at Mom + Pop Music will release it.

Galleriet – “Send Me Your Daughter” (California, USA via Stockholm, Sweden)

Over the past two or three years, Sweden has introduced us to several artists who effortlessly make breathtaking music. Although Katharina Stenbeck, who is the mastermind behind Galleriet, now calls California home, her sound still very much features the stunning color palette of the Tre Konor, as evidenced by “Send Me Your Daughter”.

Don’t let the first couple of seconds that sounds like a machine turning off fool you because the song immediately turns into a little piece of enchantment. The titillating beats and the slight swells of the synths form a soundscape that should be captured in a music box. Stenbeck’s vocals are gentile yet seductive, and she delivers a little tale about not being afraid. If you listen closely to her words and how she adopts the form of an enchantress or a creature from another time, the imagine of Fauno or the Pale Man from Guillermo del Toro’s Pan’s Labyrinth may come to mind.

“Send me your daughter
To learn what I know.
Tell her it’s nothing, tell her it’s fine.
Tell her don’t be afraid,
A racket, then quiet.
A moment, then over.”

Stenbeck’s new EP, Send Me Your Daughter, is out now, and it’s available on Bandcamp. It’s filled with little surprises, some of which are breathtaking and other unexpectedly vibrant.

A month ago, we were introduced to Ricky Lewis and his blend of vintage rock ‘n roll and Americana when he released “TV On A Tiny Screen”. The song came at the perfect time as we were longing for some guitar-driven music that reminded us of lazy summer days we enjoyed as kids. As the summer days wane, he returns with the perfect track to welcome autumn.

“See You In The Morning” is simply classic. It is music from a bygone era where songs made you smile, your heart skip a beat, and your mind gets lost in the stories. The floating melody and Lewis’ engrossing vocals induce one to grin while the steel guitar and the slight hum of the organ cause the fluttering. His story of the perfect love coming to a sudden end is heartbreaking, where the one person he loved will no longer return. It’s devastating and emotional, causing you to examine what you have and who you love. Not many artists can make you stop and contemplate your life, and we’re learning quickly that Lewis is quite extraordinary.

Lewis’ new album, See You In The Morning, is out this Friday, September 21th.

Just last month, Rubblebucket released their extremely personal and fantastic album, Sun Machine. The record documented co-founders Kalmia Travers’ and Alex Toth’s recent experiences, which included Travers’ battle with ovarian cancer, Toth’s struggles with alcoholism, and the dissolution of their relationship. Although the two are no longer a couple, they remain close friends and confidantes, and the album celebrated what they had. Now Toth is embarking on a solo project to share his thoughts and emotions, and the revelation of Tōth commences with “Copilot”.

The song is gorgeously crippling. The combination of alluring strings, trotting percussion, and harrowing guitar and bass create a soundscape that is one part dark-folk and another part orchestral-pop. It is, as such, at times breathtaking and stunning, and other times it is completely haunting, particularly when Toth’s dissonant vocals pierce through the foggy atmosphere. There is pain in his voice and lyrics, but there is no regret nor hint of hate or anger. Instead, he is thankful for the times they shared, wishes things were different, and accepts the decision they’ve made because they “had a beautiful ride”. This tune is exactly that. 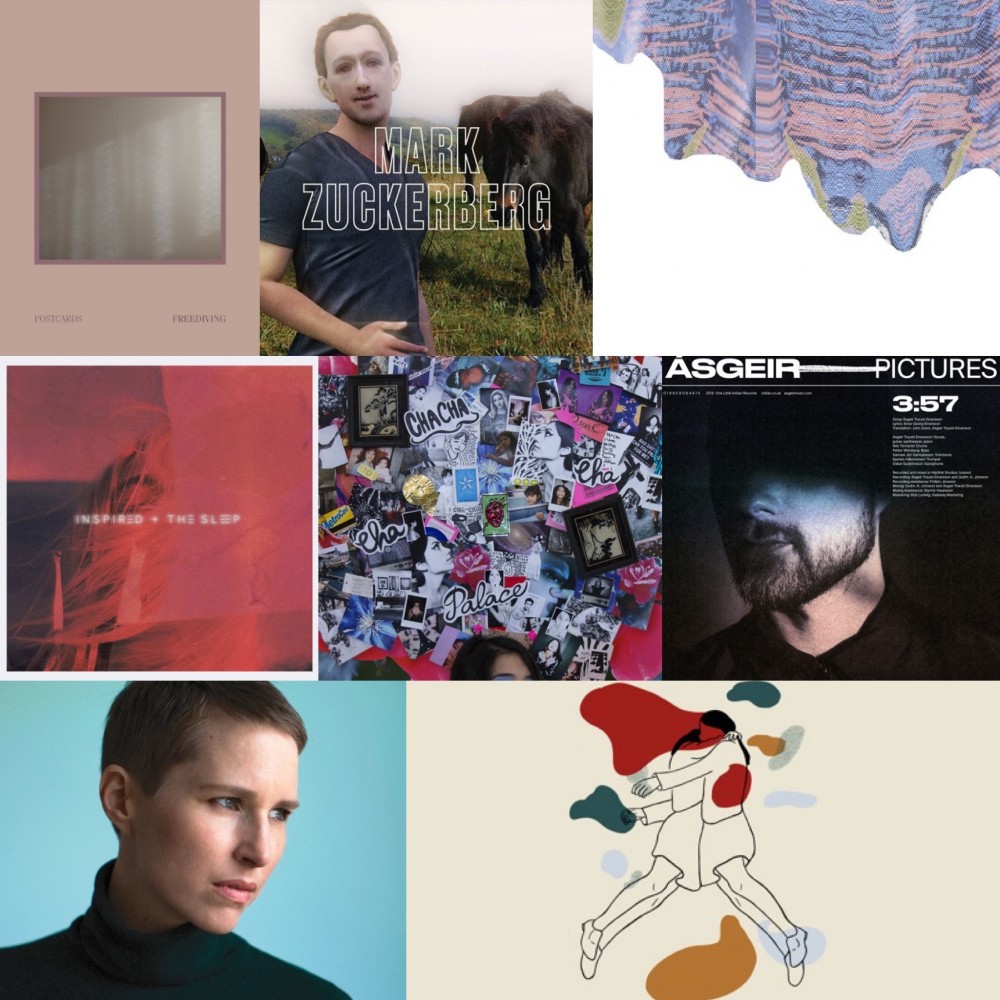