On their highly-acclaimed debut album, 2017’s Love in the 4th Dimension, The Big Moon made nostalgia hip again. Whether it was recalling a night out or a past relationship or channeling their inner Pixies or Libertines, the quartet’s record took us back in time and made us celebrate all the grand moments and our imperfections. The Big Moon had hit the big time, becoming a BBC Radio favourite and performing in front of sold-out venues on both sides of the pond. Everyone wanted in on the UK’s next big thing, including Marika Hackman, who asked Juliette Jackson, Fern Ford, Celia Archer, and Soph Nathann to be her backup band on her own critical hit LP, I’m Not Your Man. They were on the quick path to stardom.

To accelerate their journey to the top, The Big Moon could continue down the nostalgic path and give fans more of what they knew. On their sophomore album, Walking Like We Do, however, the band opted to look forward instead of back. They have opted to create an album that subtly provides optimism in the confusion of today’s mass hysteria, and they’ve done so in poetic and moving fashion.

Lead single, “Take A Piece”, is a gentle, ’90s-esque pop-rock ballad that finds strength in friendship. The song personifies the hope that echoes through half the record. As Jackson cooly states,

“Take a piece of me
Put me on the pages of your life story
And I’ll give you everything until there’s nothing left to eat
‘Cause I need you so much more than I need me.”

The summery vibes of the charming and infectious “Barcelona” continues the theme of the importance of togetherness as we get older, where our identities are created from the bonds we forge with others. The piano-driven pop ballad, “Why”, offers more chilled vibes. Beneath the bouncy melody, however, is the voice of a person who feels ignored and alone. This isolation is repeated on the funky and addictive “Don’t Think”.

The Big Moon further their gaze and look outward. On the dark and heavy “Holy Roller”, the band address the growing divisions of our world and how the future no longer looks bright for younger generations. As the guitar, synth, and rhythms pound, Jackson sings with a building ferocity:

“I’m going to start a religion now,
For all the kids with no future
Paint our angels on the ceiling
We need something to believe in.”

Album opener, the sweeping “It’s Easy Then”, provocatively describes how we are own worst enemies. How consumerism and materialism cannot even sate our deepest desires and wants. Social injustice is the focus on the slow-building, orchestral-pop tune, “Dog Eat Dog”. Jackson articulates – in an undiplomatic way – the world we live in when she sings:

“There’s always someone out there screwing somebody,
But we only see the things we want to see.”

For all the moments that The Big Moon evoke and provoke, they achieve euphoria on the album’s highlight, “Your Light”. The track grabs hold at the start with an infectious, burgeoning bass line before it explodes like a supernova and radiates an intense energy. It is a song that celebrates who we are and that we can always find solace in our friends. It reminds us that despite the hardships that have passed and those that are to come, we still have each other. And this is an important thing to remember in today’s chaos. This album, as such, arrives at the perfect time, as we look ahead to what this year and this decade may have in store for us.

Walking Like I Do officially releases tomorrow, Friday, January 10th via Fiction Records. Get it and other The Big Moon merchandise here. 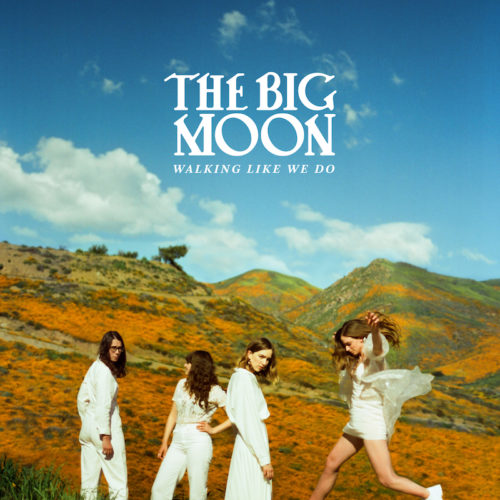