The Matinee ’20 March 2 edition is a special one. With International Women’s Day less than a week away, we are focusing on nine talented woman artists and female-fronted bands. Don’t consider this mini-playlist as the “best woman artists/bands” in the world because we’ve long held the opinion that women are making the most creative music on the planet. Instead, this is a celebration of their craft from artists across North America and Europe. Female artists are not just singer-songwriters, pop stars, or pop divas. They are pushing the envelope across all genres, and these nine songs are just a small sample of that.

Switzerland is a beautiful, peaceful place where disruptions are minimal and the loudest noise one might hear is the clashing of glasses as people toast each other after a day on the slopes. Maybe unfairly, but Roger Federer’s home has a reputation of being quaint and quiet. These two words, though, don’t apply to Annie Taylor (though the quartet are really polite), who have crushed venues with their old-school alternative rock. They’re not a one-trick pony, as they prove on “A Thousand Times”.

A summery, garage pop-rock vibe hums with the jangly guitar and tepid percussion. Despite the track’s warm vibes, Gini Jungi’s lyrics are anything but sunny. She reveals the darkness that clouds her mind after losing someone, and how she now drinks to escape her personal imprisonment. As the song progresses, Annie Taylor return to their roots. The urgency intensifies, and the song takes on a heavier tone. It’s now a rocker that showcases a hint of what this young band is possible of achieving.

When listening to “Calm Down”, the latest single from under-the-radar artist Bathe Alone, the immediate reaction is, “How is Bailey Crone unsigned?” This young woman from Atlanta is not merely a singer-songwriter. She’s a producer and multi-instrumentalist; with respect to the latter, she just doesn’t play a lot of instruments. She masters them.

“Calm Down” is a dazzling piece of shoegaze-y dream-pop that feels like a sunny day at the beach. It commences with a wind-swept feel with the feathery rhythms, a chiming guitar, and Crone’s lush vocals. Through the shimmering atmosphere, Crone tells herself to calm down and find something to focus on to control her panic attacks. As the song continues and her attacks intensifies, it erupts with an ear-popping guitar solo. Suddenly, we’re being swept out to sea with Crone trying to find a place where she and we can find some peace.

Crone’s debut album, Last Looks, is expected in the summer of 2020. Hopefully someone signs her.

The Death of Robert – “The Hater Poem” (Barcelona, Spain)

What do you get when you combine Cate Le Bon with Arcade Fire? You get something like The Death of Robert, the Barcelona-based outfit whose name could be a song from Le Bon or an AF pseudonym. The origin of their name is a mystery (maybe from an early play about Robin Hood or possibly Game of Thones?) There is undoubtedly a theatrical flair to their music as evidenced on “The Hater Poem”.

Strings, piano, guitar, drums, and maybe a glockenspiel come together to create a jittery approach. It’s music that would perfectly belong in a future Pink Panther movie as the renown Inspector Clouseau is on the prowl. There is an element of espionage in the track, as front-woman Lara Giardina seductively says, “I’m watching you”. She isn’t a sleuth or a spy, though. Instead her words give the indication that one person has broken a promise to another. After being caught, he can only plead for forgiveness, but will our hero set him free or lock him in an eternal prison of guilt?

The Death of Robert are Lara Giardina, Pablo Salvadores, and Robert Panadès. They could be Barcelona’s most creative artist since Gaudi.

Just over 10 years ago, Natasha Khan – a.k.a. Bats for Lashes – released one of the great songs of the century with “Daniel”, which skyrocketed her to indie stardom. Could the same happen to Emily Moldenhauer and her project Emily Afton after people listen to “Timebomb”? It’s hard to say if the duo will similarly experience a sudden rise in popularity, but all those who invest the time with this track will agree it is absolutely stellar.

“Timebomb” is full of surprises. It builds slowly and methodically with the dark pulses of Poliça and Austra. Something unexpected happens as the pace intensifies until it reaches full-blown euphoria. Then the song veers into deliriously urgent, disco-New Wave territory. The orchestration and production work are superb, and Moldenhauer’s smoky vocals smolder. Her words, too, grab your attention, as she describes how two people in the same relationship can feel trapped. But in listening to this song, we would gladly be mesmerized by Moldernhauer’s sonic spell.

In 2018, classically trained violinist Margaux Sauvé – a.k.a. Ghostly Kisses – released one of the most stunning EPs of that year with The City Holds My Heart. It was an emotionally heavy but beautiful record that showcased the Québec-based artist’s ability to create bold, sweeping soundscapes through subtle arrangements. She returns with yet another stellar single.

Just close your eyes and inhale the gorgeous “Never Let Me Go”. Arranged over a synth, keys, guitar, and light percussion, Sauvé delivers something spellbinding. Her songwriting is equally sublime as she pleads for a loved one to come home and hold her for eternity. It’s the unbreakable bond of love between a father and daughter, two soulmates, and two lifelong friends. Let this be the intimate anthem between you and the one you hold most dear.

The single is out on Akira Records, and it’s also available on Bandcamp.

It was only a month ago that we were introduced to German trio KOJ, who left us enraptured with “Jenny”. One song might not make everyone an immediate fan. Two stellar songs, however, will. Our fandom was cemented with “Thunder”.

The track is Portishead on a bass-heavy escapade. It is dark and exhilarating, gripping and haunting, and lush yet anthemic. The throbbing beats and percussion and the distant, chiming guitar form a vortex of inescapable, pulsating noise. Within this cyclone lies frontwoman Alina and her enchanting vocals, and she is preparing for the arrival of a storm. When it arrives, she feels like she is “drowning again”. We feel her suffocation: while this entire song will overwhelm you, you will not want to escape. Instead, you’ll gladly drown in it.

KOJ are Alina, Nils, and Simon. Their new album, HOME, arrives April 24th via Long Branch Records. It should be one of the year’s most exhilarating experiences.

It’s worth reminding people who LPX is. The alter-ego of Lizzy Plapinger is a co-founder of the excellent Neon Gold Records whose alumni include HAIM and Passion Pit. She’s also half of MS MR, who helped usher in the current wave of electro-pop. As a solo artist, she’s still making a name for herself. This seems like more of a creative release for her, where she can create whatever she wants because she wisely refuses to be pigeon-holed. Case in point: “New Mood”.

Call it alternative, indie-rock, electro-rock, punk-rock, LPX unleashes her anthemic rock side. From start to finish, the song is simultaneously intense and energetic, highlighted by the pounding beats, percussion, and bass. As fiery as the music is, Plapinger’s lyrics hammer harder and pound at your head well after the song finish because we can relate to her tale. Relate to her struggles to turn the page and be who she wants to be. Her early words belong on an inspirational poster:

“I wish that I could just move forward
Instead of being an emotional hoarder
I think it’s time for cutting lose
It’s time for choosing what you choose
And once you find your point of view
I hope you light up like a fuse.”

The single is out on Neon Gold Records. No word on whether a new album is on the way.

Grab a pen or your phone and write Winnie Raeder‘s name down so you don’t forget who she is. Actually, go iTunes or Spotify or whatever streaming and purchasing site you use, and download all of her music. The Danish-born, London-based singer-songwriter and producer is going to be a star. With an unforgettable, ethereal voice and a style that is akin to the great Morcheeba, Daughter, and Hundred Waters, people will soon be lining up to see her perform at a nearby venue. If you need to be convinced, then let “BABY” be the answer.

There isn’t much more to say about the song. Simply free your mind of all thoughts, dim the lights, and just listen. Allow Raeder’s voice and lyrics to consume you and relax your soul. Listen attentively, though, because her tale is not about a lover or another person. Instead, “BABY” is us. Her lyrics concern the ideas, images, and information that flood us each day to the point we lose our sense of self. Where we seek a “broken savior” to free us from the chains. For us, all we need to do is hear this song over and over to find our escape.

This special edition of The Matinee draws to a close with a song that can only be described as majestic. “Fly” is neither a bone-jarring anthem nor a wall-shaking rocker. Instead, souls are rattled and minds are blown by the haunting beauty that reverberates throughout. This includes the low hum of the guitars, the steady rhythms, and the stirring vocals of Chloe Zelma Studebaker – the genius behind Zelma Stone.

But the dusty folk-rock sound isn’t the only thing that wraps around you. Zelma Stone’s lyrics will also shake you. She is the friend that recognizes everything, from the tone of our voice that indicates happiness to the subtle, nervous twitches that reveal frustration, disillusionment, and despair. In this case, she notices we are on the verge of taking the last step over the edge. She eloquently sings:

“Cup one hand to rest your face
It really stumped you and left a nostalgic taste
‘Cause you’re old and your body’s getting ready to die
I say just take it in, let us feed you some pumpkin pie.” 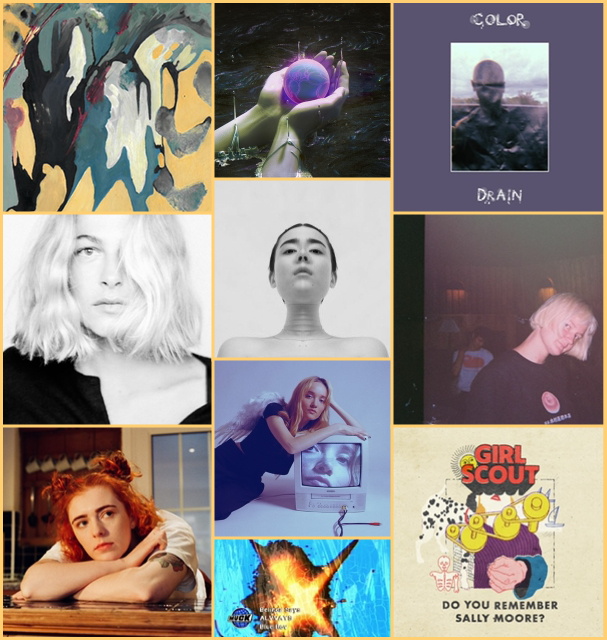