The Matinee ’20 June 15 edition is a hodge-podge of new material. There are songs that are euphoric and others that are provocative. Some will have you dancing while a few will have you contemplate your existence. So whatever your mood is today, you’ll find a song to fit your frame of mind.

A decade into his solo project as Big Black Delta, Mellowdrone bassist and vocalist Jonathan Bates has carved out a unique niche within the competitive electronic field. Instead of replicating the EDM that has become synonymous with dance clubs across the world, he’s merging his rock origins with anthemic, edgy electronica à la Trent Reznor. The combination yields something dynamic and explosiveness. His music makes you think you’re attending a rock show at a rave, which is the experience one gets when listening to “Canary”.

To hear the song properly, click the SoundCloud audio and hear it directly on that platform. Or on Spotify, Deezer, etc. Then hit the “repeat” button because the song’s start and end are link. It’s one continuous loop, which is ingeniuos. Now not everyone wants to infinitely hear the same song, but for runners this one track could be your playlist. Blasts of booming beats and rhythms, searing synths, and eruptions of guitar are cycled throughout the track, but they all come together during its seismic and euphoric climax. The moment is like Mount St. Helens blowing its lid, creating an incredible and unforgettable spectacle. Is this an overstatement? As Bates says, “You will never believe it / She will never believe it / I can’t believe / We were never believing”, until you experience it. Take a listen and you’ll become a believer.

“Canary” is from Big Black Delta’s new album, 4. It drops July 4 on Masters of Bates, and pre-orders / pre-saves are available here.

Is there a better way to start the week than some airy, blissful shoegaze? Really, what could be better? How about discovering a brand new band whose debut single sounds like it was taken from the back catalogues of Lush’s, Cocteau Twins’, or Slowdive’s rich anthologies? Today, we get both in listening to Swedish newcomers Boy With Apple‘s dreamy “Green Eyes”.

Like waking up to a beautiful day or arriving at work to see a surprise gift on your desk, “Green Eyes” will put a smile on your face. The crystalline chords, the effortlessly floating vocals, and the heart-pumping rhythms are all classic and familiar. And yet, they all sound refreshing in this era of over-manipulation. The melody, though, isn’t the only thing that will steal your breath away. Co-front-women Saga Fransson and Zara Henriksson channel Alvvays Molly Rankin, telling a tale of letting themselves go and finding liberation from our own constraints. It sounds like a coming-of-age message, but it applies to all of us, especially in today’s monumental times.

In addition to Fransson and Henriksson, Boy With Apple includes Tim Hedlund and Arvid Boström. Sweden has delivered another exciting band to watch.

Single is out on VÅRØ Records. 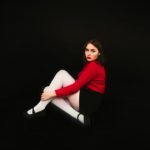 Once upon a time in the not so distant past, women who were willing to speak their minds were frowned upon. “Keep your sharp tongue in your mouth!”, people would say in order to silence anyone who would dare to say something “unwomanly” or even thought-provoking. While we still have a long ways to go when it comes to gender equality, we at least live in an era where intelligent songwriting is applauded and encouraged. No one, for instance, would dare tell Lana Del Rey to keep her sharp tongue in her mouth. Instead, we listen to her provocative words and get excited when a young artist arrives that adds more depth and cleverness to the music world, like “newcomer” Ellie Bleach.

Calling London home, the singer-songwriter’s new single, “He Bought Me Nikes”, is a sharp, biting, and clever number. Through the whirling harpsicord that directs this whimsical baroque pop tune, Bleach wittingly tears down our patriarchal societies. She takes aim at the men who seek to rule like dictators of a cult yet are oblivious to the needs and wishes of those around them. Forget deep connections; they think they can appease people by simply offering gifts. They can do whatever they want because they are gods who will lead us to the promiseland, or so they think as we roll our eyes alongside Bleach. The world needs more people like Bleach and her “sharp tongue”.

The single is available for purchase on Bandcamp. All proceeds will support Black Lives Matter efforts.

When an artist decides to forge a solo side project from the main band, s/he often does not stray too far from the original apple tree. Maybe instead of offering Royal Galas, they’re dropping Macintoshes. They’re slightly different, but they’re still red, sweet apples. Occasionally, however, an artist truly wants to branch out and tackle something new and different from the mothership, which is the case for Circa Waves‘ Joe Falconer and his project Harpo Milk.

Wheares as Circa Waves have mastered the art of anthemic, stadium-filling alt-pop songs, Falconer turns to the ’80s and ’90s and its college-radio scene when indie-rock started to bloom. These were the days when teenagers and twentysomethings sought comfort in the music of Yo La Tengo, Sonic Youth, Dinosaur Jr., Liz Phair, and early R.E.M. They created music that represented not themselves but an entire generation. In Falconer’s case with “Glue”, he’s crafted a moving rocker that spans decades.

The ’90s, indie-rock vibe is unmistakable – from the muted prologue to the melodic yet growling climax that is both a head nodder and breathtaking. As the guitars simultaneously snarl and glisten, Falconer reflects on the angst that occupies the minds of many, much like it did nearly 30 years ago. But unlike the ’90s where the music represented youth’s displeasure and concerns, Facolner’s voice and words are for all. He is the “glue” that unites generations, as his first words, “Leaving home, I got the feeling I want to die”, are ones people have said regardless of their age. Instead of giving up, though, he seeks a way out by attaching himself to another. Only then he can be lifted, and he encourages us to do the same. 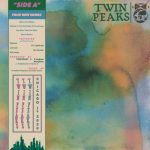 For a decade, Twin Peaks delivered fiery and frenetic garage- and surf-rock that made you get up off your derrière. Pretty much everything they created was akin to a party, where you were guaranteed to have a good time. These days, however, are far from ordinary, so only the extraordinary will suffice to raise our spirits. For Cadien Lake James, Clay Frankel, Jack Dolan, Connor Brodner, and Colin Croom, they go back in time, call up their friends Ohmme and V.V. Lightbody, and deliver a song that can only be described as an instant classic.

“What’s the Matter” sounds like it was spawned at Newport Folk Festival, where the day’s performers would gather on the Fort Stage and collaborate on a cover. Twin Peaks, though, have crafted an original tune that could have been in The Band’s long-lost treasure trove of unreleased material. Like the legendary group’s music, Twin Peaks and friends’ track will have you singing along just after the second listen and put a smile on your face, which will last all day. The song, though, isn’t entirely “classic”, as the Chicago gents added their own fun-loving personality by making references to a “Ganon” and a “heartsick Bokoblin”, which are characters from The Legend of Zelda video-game series. So although the quintet go back to rock ‘n roll’s roots, they still find a way to have a good time on this terrific tune about staying together.

Twin Peaks’ new EP, Side A, will be released July 3rd on Grand Jury Music. Pre-orders links can be found here.

When the times get darker, the music gets exponentially better, or so say long-time music fans. But maybe we’re in the dawn of a new enlightment, where artists will challenge the status quo regardless if times are prosperous or filled with crises. Some bands keep us grounded, including Denmark’s Yung, who like their countrymen Iceage are ensuring post-punk remains a genre governed by just causes and not merely entertainment. And at this moment in time, reality is our fiction, and the news is our fantasy. The world has turned upside down, which is brilliantly captured in Yung’s newest single, “Progress”.

This number is a melodic, gruelling post-punk epic that quietly rages with humming guitars, cascading rhythms, and front-man Yung Shord’s desperate voice. He is trapped in a desolate world, but this place is both his mind and his home. He seeks to advance in this world and be like everyone else and consuming as much as he can. However, he cannot. He does not aspire to be successful, but instead to be heard. Is this a sign of failure or is it progress?

“I shouldn’t settle for anything else than long-term success
But it’s hard – Every time I’m taking a step it feels like I’m dragging my feet
I thought my possessions were helping me a great deal on my quest
But they have only been a burden while I’ve had my eyes on the prize, which I will get