The Matinee ’20 June 22 features one masterful epic, intimate dazzlers, and face-melting rockers to start the work week. We’ve organized the selection in the order that we think the songs should be heard, starting off with a monstrous single.

Two years ago, one of the great shoegaze bands of the past decade (and with one of the great names in history), Pinkshinyultrablast, unveiled their long-awaited debut album, Miserable Miracles. The record ended up being one of our favorite albums of 2018 because it was an incomparable, multi-dimensional experience. Since that time, front-woman Lyubov moved to LA, which makes recording new material a bit of challenge, especially considering the 10-hour time difference and the band’s preference to cut tunes together. With this spatial challenge, what do the trio do? They just craft one of the year’s most outstanding numbers.

“Songs” is an extraordinary epic of jaw-dropping, eye-popping, mind-blowing post-rock shoegaze. It is Lyubov (vocals), Rustam (synths/electronics), and Roman’s (guitars) masterpiece, which is saying an awful lot considering their stellar catalogue. Imagine actually being the real-life Cooper of Christopher Nolan’s Interstellar, where you travel to the far reaches of the galaxy and enter a wormhole. Inside it, an array of colors and sounds cascade around you, just like the first part of this nearly 16-minute escapade. Calm then suddenly arrives, and a sense of peace and serenity overcomes you. The ambient synths in part two represent our awakening. The task, however, is not completed, and one final push to ensure humanity’s survival must be undertaken. A sacrifice, however, must be made. After some contemplation, we take a leap of faith. What happens next is up to you, but, like the third part, you’re final act is unforgettable.

“Songs” is out on Club AC30. Here’s hoping the trio have more epics up their sleeves.

THE NINTH WAVE – “I’m Only Going to Hurt You” (Glasgow, Scotland)

Five years ago, Gigwise named the 19 greatest Glaswegian bands. The list included the expected suspects – The Jesus and Mary Chain, Belle and Sebastian, Frightened Rabbit, Mogwai, The Twilight Sad, Camera Obscura, CHVRCHES, Franz Ferdinand, Primal Scream, and many more. If a twentieth was to be added, The Ninth Wave would have to be seriously considered despite their youth. The project of Haydn Park-Patterson and Millie Kidd is one of the most exciting bands around because their blend of Gothic post-punk is constantly evolving. A month ago, they shared the stormy “Happy Days!”. This time around, they push aside the thunderous clouds and allow a little bit of light in on “I’m Only Going to Hurt You”.

Like Eagulls merged with Hurry Up, We’re Dreaming-era M83, Park-Patterson and Kidd bring Gothic post-punk to the dance floor. Surging synths sear alongside the pulsating rhythm blend, creating a mood that is exhilarating and hypnotic. Creating a mood that is simply magnetic, where one is compelled to blindly spin under the song’s radiate energy. Despite the energy induced from the track, Park-Patterson’s vocal and lyrics are strained with despair. He reveals a “certain kind of sadness” that eats away at him, and he will eventually “end up in tears”. This sadness is the slow realization that a relationship cannot be saved even before it has even blossomed. To know more about Park-Patterson’s, his poem My Severed Heart, on which the song is based, can be read in the YouTube notes. 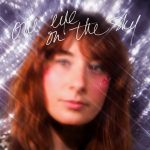 Brooklyn’s Emily Reo has been crafting pop music that is uniquely hers for quite a few years. From the impactful, synth-laden Olive Juice to the diverse and enthralling Only You Can See It, as well as dreamy singles like “Spell”, it’s easy to get excited whenever Reo releases something new. Last week, Reo shared a new single, “One Eye on the Sky“.

On “One Eye on the Sky”, Reo continues those dreamy pop vibes. There’s a lot to this track. A harpsichord-synthy intro with Reo’s voice lightly distorted breaks into a bouncy chorus. Lyrically, it’s reflective about finding a balance between lives. About halfway through, the song hits an ethereal point at its bridge. Reo’s voice drenched in vocoder gets layered upon itself, before giving way to guitar. It’s an amazing moment. “One Eye on the Sky” features Julien Fader (Ava Luna) on drums, who also produced the track, as well as Jack Greenleaf (Sharpless) on bass and guitar.

“One Eye on the Sky” is a Bandcamp exclusive, released by Carpark Records, originally released to support the platform’s Juneteenth initiatives.

Summertime is synonymous with road trips and adventures. The long, sunny days are invitations to explore somewhere new or return to our favorite places and, in turn, create new memories. Although these times are far from normal, we can still take a short trip or imagine where we would go once it is safe to travel. Maybe it’s the beach, the cottage, a visit to a museum or amusement park, or reconnecting with family and friends, we all should be somewhere enjoying the warm weather. Regardless if we’re daydreaming about where to go or actually on a vacation, we need a soundtrack, and one song that should be on every playlist is Port Lucian‘s “20z”.

The project of Philadelphia’s Portia Maidment, “20z” is the “newcomer’s” fifth single, and it is a dazzler. Just like the images that Maidment’s alias evokes, the song’s jangly, dream-pop approach sounds like the music made for the ideal seaside, holiday destination. The classic orchestration feels like a cool ocean breeze blowing through your hair while Maidment’s voice and lyrics relax your soul and bring a smile to your face. She, like us, is daydreaming, but she’s in the car en route to Cleveland to visit people close to her heart. As cars whiz by and exit signs appear every five miles, she’s lost in thought and within the sense of freedom the open road provides. Oh the thought of a trip down Interstate 90 sounds extremely appealing right now,=.

Port Lucian’s music can be found and purchased on Bandcamp. Add all of them to your summer playlist.

France tends to get overlooked for discovering awesome rock bands. It’s indie scene is highly underrated, but anyone who takes the time to search the country that gave us “Liberté, égalité, et fraternité”, will be well rewarded. We’ve covered several French bands, and a new one to add to our own personal list is Cloud Factory. Fronted by “newcomer” Alice Cyprine and featuring members of Cathedrale and Noir City, Cloud Factory are a bit of a blast from the past, as they channel the rambunctious garage punk-pop of the late ’80s and early ’90s. The music of that era was like a shot of adrenaline, which is the case with “Amnesia”.

The track is exactly what you need today. It is like the first cup of coffee on a Monday morning, waking up all your senses and getting you ready to tackle the world that awaits. The over-driven guitars, the awesome bass line, and the pummeling drums provide the massive shots of caffeine while Cyprine’s saccharine vocals provide the sweet aftertaste. Her lyrics, though, linger for a long time, as she addresses how a relationship can slowly disintegrate, leading to one to neglect the other and forget she even exists. So while the song might get you revved up to start the day, be sure to embrace your partner, give her/him a kiss, and don’t be the ass that Cyprine sings about.

“Amnesia” is taken from the band’s debut EP, Cloud Factory #1, which will be released July 3rd on Howlin Banana Records. Pre-order it on Bandcamp. 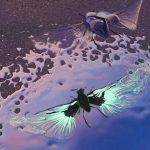 In 2017, darkDark were on the fast-track to indie stardom. Their sensual, cinematic brand of electro-pop / electronic caught the ears of NPR, Noisey, and even Perez Hilton. Their debut EP, Heathered, was a gorgeous spectacle, highlighted by the gorgeous “Shelter” and the sweeping “Restless”, which featured Haley Bonar. Then Genevieve Vincent and Chris James went, well, dark. They weren’t to heard from again until last month when they unveiled the BROODS-esque “In Two”. At the same time of releasing their first song in three years, they announced that their sophomore EP, We forget when we’re apart, will be out on July 31, and Nettwerk Records will distribute it. Now we know why Vincent and James were silent – they had signed with one of the great labels. In preparation for the record, they have shared “No Symmetry”.

Like falling into a stunning rabbit hole, “No Symmetry” is an out-of-body experience. Vincent’s hazy voice is breathtaking and dazzling, and it provides the perfect contrast to the stark beats and James’ scratching guitar, which illuminates the dark-pop atmosphere in the song’s outro. As we are free-falling and trying to escape to a new dimension, Vincent tells us she knows what we’re feeling: “Sometimes I feel like my memories are chasing me / No matter how fast I run, I never get free”. Discovering our selves, though, requires us to do take a chance and do the unexpected.

But whatever you do, don’t let go of the name darkDark because the duo are once again back on the path to fame.

The fine folks at Nice Swan Records have a great series called Introduces, which showcases some of the finest bands and artists in the UK and Ireland. For people obsessed with finding new music, especially rocking tunes (like us), it’s a great place to start. It’s also a great place to find your new favorite band, such as Irish outfit Sprints.

Take a deep breath, loosen up your limbs (stretch if you have to), and have a towel nearby because “The Cheek” is a get-up-off-your-butt-and-loose-your-shit song. In other words, it’s a raucous, propulsive piece of stupendous garage-punk-pop. The guitars surge out of the speakers while the rhythms just might blow apart your sub-woofers. Meanwhile, front-woman Karla Chubb’s assertive vocals and even more forward lyrics are the rallying cry by which we assemble against the misogynists and narrow-minded. More specifically, as Chubb wrote, “(T)his is my big fuck you to all those people” who refuse to treat LGBTQI+ equally and only see them as curious sex partners. So while you rock out hard to this adrenaline-inducing number, do so in solidarity with your LGBTQI+ friends while raising middle fingers to the leering onlookers. 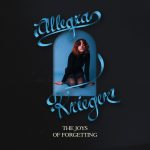 Allegra Krieger has plenty of stories to tell. On her upcoming record, The Joys of Forgetting, Krieger sings of her path that led her to where she is now. Raised in a strict Catholic family in Florida and eventually escaping the grasp of religion and finding herself, it’s obvious where the album’s title came from. Last week, Krieger shared the third single so far from the record, “Welcome”, which joins “The Push and the Pull” and “Rot”. All three tracks have brought something different to the table with “Welcome” being a true stunner.

Right from the instant “Welcome” starts, listeners will be drawn in by Krieger’s inviting voice and acoustic guitar. The vocals are pristine, as is the composition with occasional guitar cutting through, a perfect, understated drum line and sweeping swells of strings. It’s an undeniably gorgeous song, especially as it builds to its climax. “The song is about being vulnerable. It’s about embracing the inevitability of difficult times with a partner, and using those moments to grow. It’s final moments capture that sentiment perfectly.

The Joys of Forgetting will be released August 7th via Northern Spy. The record was produced, engineered, and mixed by Adam Schatz (Landlady).