We end the week the way we started, featuring powerful female voices with incredible stories on the. The Matinee ’21 v. 040 mini-playlist opens with a well-known powerhouse followed by emerging artists with the potential to soon reach similar heights.

London Grammar – “How Does It Feel” (London, England)

Pain is a strange blessing: battling any affliction, whether physical or emotional, increases our appreciation for pain-free days. Listening to the new London Grammar single “How Does It Feel,” you might not realize that frontwoman Hannah Reid endured her own battle while recording it. But once you learn more details, this euphoric pop anthem becomes even more inspiring.

This single from the band’s upcoming third album, Californian Soil, dazzles with sophisticated yet danceable pop hooks. Reid’s vocals alternate between sultry and yearning, giving no hint that she was suffering from a fibromyalgia relapse. Its physical toll initially slowed the recording process but could not diminish the band’s powerful sound. Reid transfixes listeners while bandmates Dominic ‘Dot’ Major and Dan Rothman deliver instrumentation so lush every note becomes more hypnotic than the last.

The lyrical imagery of pain and regret contrast the uplifting instrumentation, making it a guaranteed hit for the Nottingham-based trio:

“Pure emotion
Let it burn like fire
Do you yearn for a change?
And I hope that you learn
To never make the same mistake

You regret now – does it hurt?
In the confusion that things have stayed the same
And I know now I’ve learned
To never make the same mistake”

“How Does It Feel?” follows the album’s earlier singles, “Californian Soil” and “Lose Your Head”. All three have us convinced that Californian Soil will rank high on our Favorite Albums of 2021 list. The LP is due April 9th via Ministry of Sound with pre-orders available here.

With spring on the horizon and the sweet bouquet of spring’s blossoms beginning to fill the air, it’s time to set aside the parkas, heavy sweaters, and flannel pyjamas. It’s time for us to bloom as well and feel the energy of our surroundings and those who inspire us. To help us shed our extra layers and feel reborn is “newcomer” Jiordy.

Despite having released only a few singles, Jiordy has garnered a massive following on Instagram after releasing “UR Dumb” and “Weight in Water”. Both songs were on Triple J’s regular rotation while also finding their way on to various Spotify playlists, demonstrating the young Melbourne-based singer-songwriter’s broad appeal. While some artists catch lightning in the bottle, Jiordy is no one- or two-hit wonder. As her latest single displays, she should become a mainstay on the influential Aussie radio station and streaming platform.

“Vigor” is like an intoxicating dream that leaves your head in a daze and body in a state of suspended calm well after you’ve awaken. And yet you feel refreshed, exhilarated, and invincible. The light synth touches and pulsing drum beats create the dreamy atmosphere in which we find ourselves. The production work is sparse yet dazzling, showcasing that simplicity can be emotionally moving and physically stimulating. Jiordy’s hushed vocals add to the song’s hypnotism while her words articulate the power of being in the presence of people who energize, motivate, and invigorate us. These people make us want to grow every day, become better versions of ourselves, and always look ahead. Kind of like what Jiordy has done with “Vigor”.

Not many artists get endorsed by heavy hitters with their first two songs. There is Maggie Rogers, who shot to fame thanks to Pharrell Williams, but one would be hard-pressed to find similar examples. One of the exceptions is Kidä, whose debut single, “Kneel to You”, was proclaimed “the best song I’ve ever played on the radio” by Def Jam’s Genesis Garcia. The great Dev Hynes, the man behind Blood Orange, stated that the Egyptian-Italian’s previous single, “The Garden”, was his “Song of the Year”. Talk about getting a confidence boost! Now what these great minds say about “Brother”? They might just utter one word, “Amazing!”

A dark, suspenseful yet groovy mystique arises from Kidä’s deft production work. It is a song made for either slowly dancing in a hypnotic state or chilling with friends with everyone nodding to infectious synths and beats. At the same time, the track could the song playing in the background when two individuals have a chance encounter at an exclusive, underground club in London’s Soho district. There they engage in a cat-and-mouse game, but these individuals are not strangers after all. They are estranged siblings trying to decide whether to reconcile. Kidä’s songwriting is equal to her musical talent, as she recounts how she extends an olive branch to her brother. In this time where so many people have been separated for so long, it is time to make amends and survive together.

Kidä’s debut EP, Burn To Make It Glow, is out April 7th. It has the makings as one of the year’s best mini-records.

Let’s just get this out of the way – we just might have found our favorite band discovery of the year in Girl Time. But then again, siblings Michaela and Ian Vachuska have been around for years, doing covers and releasing demos. Only in the past year or so have the duo tackled their project with more focus and vigor, and their effort has resulted in not one but two outstanding songs this year. The first was “Heaven”, which they released at the start of 2021 and was a stunning yet sobering affair. They followed it up with “Pretend”, which simply is one of the year’s great songs.

This lo-fi indie-rock tune echoes of the sadcore music of the ’90s, particularly the music of Red House Painters. It is groovy and head-nodding infectious yet brittle and intense. The stuttering rhythms and the light, jangly guitar strums reel you into the Vachuska’s nostalgic world of tattered jeans and flannel shirts. You stay, however, to hear Michaela’s and Ian’s vulnerable voices and revelation of struggling with one’s mental health.

You can’t get more “emerging artist” than Toronto’s PACKS and its creative force Madeline Link. Despite only having two tracks to PACKS’ name, Link is not a newbie to this, she also is in a band called Triples with her sister which leans towards power-pop, PACKS, however gets grittier and edgier. Hearing either of PACKS’ two new tracks, it’s easy to understand why PACKS is commanding peoples’ attention.

On their latest single, “Silvertongue”, the sound PACKS achieves has a bit of a 90’s slacker rock and grunge vibe. Crunchy guitar chords, an unassuming vocal delivery, and big guitar solos that cut through the track. There’s even a time change to keep listeners on edge, slowing things down and adding to the vibe. The song is about taking the power and identifying what’s meaningful in a relationship. When talking about “Silvertongue”, Link said “Ditch the whiplash of manipulation and decide what YOU want out of love!”

PACKS’ debut record will be a combination of songs written in 2019, while Link lived in urban Toronto mixed with 2020 lockdown tracks recorded while in her family’s home in an Ottawa suburb. That sounds like an interesting dynamic to play out over the course of a record.

The band’s debut album, take the cake, will be released May 21st on Royal Mountain Records and Fire Talk Records. Pre-orders and pre-saves are available here and directly on Bandcamp.

London punk rockers Fresh have been challenging norms since their first record in 2017. Since then, the band of vocalist/guitarist Kathryn Woods, bassist George Phillips, guitarist Myles McCabe and drummer Daniel Goldberg have been unstoppable. From their powerful 2019 record Withdraw to the band’s more emo sister-project Me Rex, they’ve been an absolute force.

On their latest song, “Girl Clout”, Fresh may make their loudest statement yet. It’s a song Woods wrote in just minutes, the perfect way to capture the frustration she felt in the moment. It calls out women not being taken seriously in music. Whether it’s condescending comments or unwanted advances from men, experiences that are seemingly universal for women in music. Fresh tackle it right out of the gate, with an immediate expression of anger. It also confronts the ingenuous male ally who tries to elevate womens’ voices only to get something in return. It’s all wrapped up in a catchy punk track with fuzzy guitar clocking in under two minutes.

“It’s here for sure and certain
I see it in your eyes
Play shows with us for girl clout
Tell me you’re one of the good guys!”

The single is out on Specialist Subject Records. Pick it up on Bandcamp.

What’s immediately noticeable on her new single “Pictures”, is the shedding of the folk rock sound that Serrat established so far. There’s so much to this track, synthesizer, some wonderful reverbed guitar, and Serrat’s undeniable voice sounding stronger than ever. What hasn’t changed is Serrat’s impeccable songwriting, “Pictures” is about both internal and external frustration in a relationship. It’s about the realization that perfection is not realistic, and sometimes you have to rip the band-aid right off and not waste time. Guitars cut through everything and intertwine with Serrat’s voice throughout, and the whole thing gets dreamy throughout its choruses. Its closing moments are incredible, reaching some incredible heights with a guitar solo, and some immense instrumentals before it all finally explodes.

Serrat’s new album, Hardcore From The Heart, is out June 11th via Loose Music. Pre-order it here. 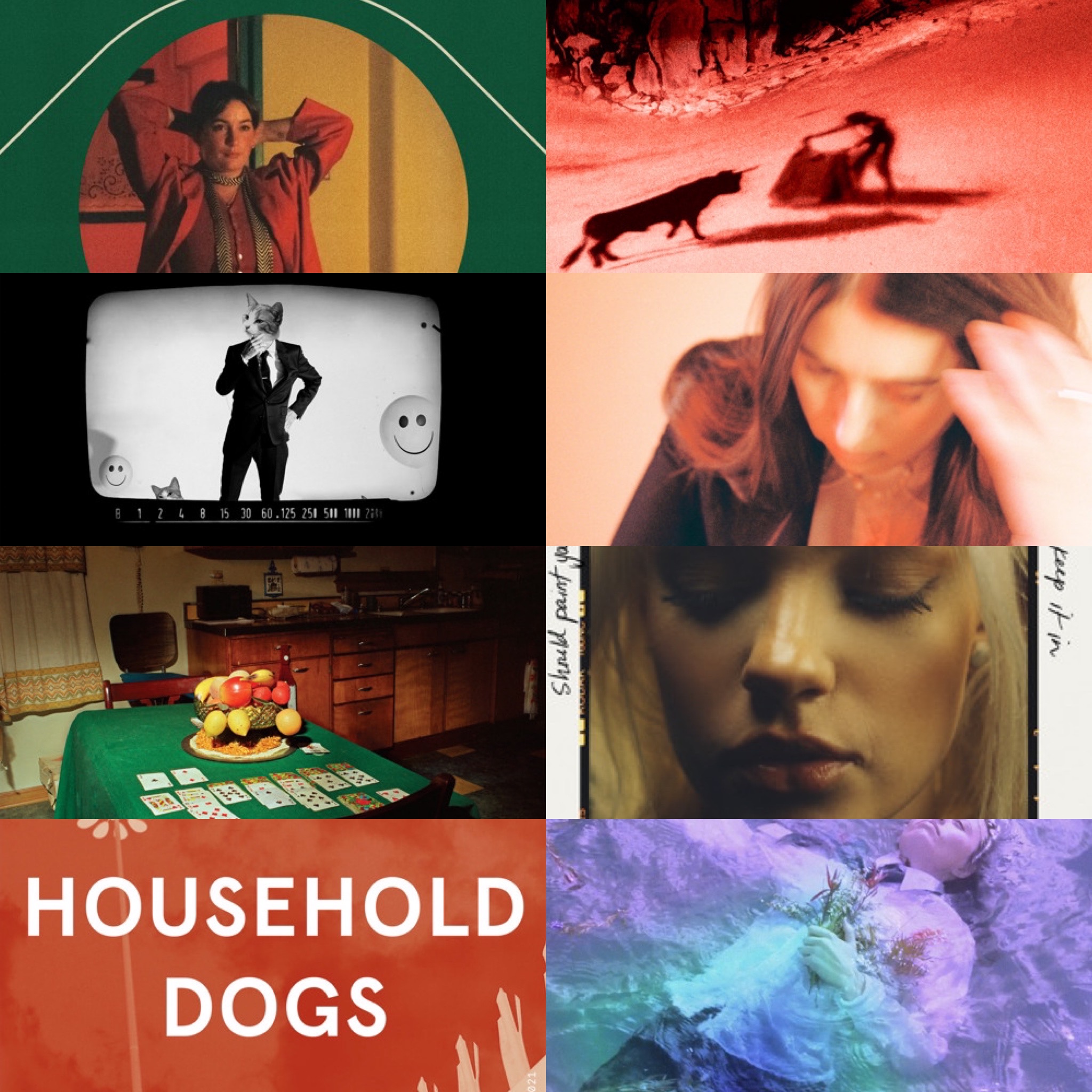