Emerging through the darkness to offer us a bit of hope and light are the seven songs on The Matinee ’21 v. 061. The mini-playlist is filled with tremendous and memorable songs, including one from a beloved Scottish band making their return after a three-year layoff.

We Were Promised Jetpacks – “If It Happens” (Edinburgh, Scotland)

For nearly two decades, We Were Promised Jetpacks have been associated with the indie-rock revival in the UK alongside Frightened Rabbit and Twilight Sad. They were the bridges between the Madchester and shoegaze explosions in the ’80s and ’90s and the post-punk revival of which we’re currently in the midst. But like their name suggests, Adam Thompson (guitar/vocals), Sean Smith (bass), and Darren Lackie (drums) have been at the forefront of new music trends. So does their return three years after releasing The More I Sleep The Less I Dream mean we’re about to witness the birth of a new genre or at least a renaissance? With “If It Happens”, the Edinburgh trio have at a minimum resurrected what made the UK indie scene cutting-edge in the ’80s, ’90s, and ’00s.

If WWPJ were a bridge between the monumental musical eras, “If It Happens” is the culmination of those great genres into one remarkable track. Stunning shoegaze guitars open the track, and they are reminiscent of Slowdive’s. It then dovetails into a cool groove that echoes Future Islands and New Order. But with Smith’s Peter Hook-esque bass line, a post-punk vibe brims below the surface. Then there is the unmistakable Scottish indie-rock trademark of bubbling urgency and poignant songwriting. This cornucopia of brilliant, retro sound mimics Thompson lyrics of wanting to take yesterday’s innocence and transport it to tomorrow so that we have something to look forward to.

Haven’t we all thought this before especially over the past 14 months?

The song is taken from We Were Promised Jetpacks’ forthcoming new 7″, which will be released June 29th via Big Scary Monsters.

Alyse Vellturo – a.k.a. Pronoun – commanded our attention with her debut record, I’ll Show Your Stronger.  Lo-fi indie pop at its core, but with way more depth and emotion to it than that label would suggest. The way Vellturo navigated through the heartbreak of the record created something that was as cathartic as it was captivating.

On her latest single, “I Wanna Die But I Can’t (Cuz I Gotta Keep Living)”, Pronoun captures that same type of energy but in a much bigger way. Opening it up with huge guitar and drums reminiscent of a Springsteen classic, there’s something even bigger here than on the debut record. Lyrically, it tackles many of the same themes of the debut LP – an influx of self-doubt and channeling energy to continue from anywhere possible. Vellturo describes the song as “about the uncomfortable feeling that everyone around you is growing into their own lives while I feel like nothing’s changing within myself.”  It’s a relatable feeling, seeing others, especially now with everyone having a window into their lives via social media, being successful while being stuck. It’s been magnified by the pandemic as well, but it’s important to stay grounded and realize the true reality is different from those moments.

“I Wanna Die But I Can’t (Cuz I Gotta Keep Living)” is a perfect example of dancing away your anxieties. Its energy is infectious, its message is relatable, and it’s enough to shed those feelings of self-doubt into something productive. It’s a celebration of keeping at it and continuing, even when it’s hard, so you can exclaim OMG I MADE IT!, which is coincidentally, the title of her new EP. The mini-record is out June 18th on Wax Bodega. Pre-order it on Bandcamp .

Roan Yellowthorn‘s debut, Indigo, was an interesting mix of indie-pop and folk music. Big moments of piano and vocals really defined the record, as well as made it obvious that the duo of Jackie McLean and Shawn Stack are both incredibly talented and creative. The record took many risks, bookended by equally surreal intros and outros. There was a soul throughout the record that made it feel alive, like an old home with a lot of history. Last year, the duo released an album of covers that contributed more to that old soul feeling.

As they gear up to release their second LP, Another Life, Roan Yellowthorn have shared a handful of great singles to provide a window into the release. Early looks into the record see the duo evolving. Early singles “Acid Trip” and “Little Love” feel more well-rounded and fleshed out than earlier releases. However, it’s on their latest single, “Stranger” where it seems like everything has come together for Roan Yellowthorn.

At its foundation, “Stranger” is a folk track, much in the vein of a First Aid Kit track. Reverbed harmonies beautifully accentuate the choruses. McLean’s lyricism paints vivid images in a way very few songwriters are able to. Perhaps it’s not surprising to learn that “Stranger” was written as a musical portrait of one of this generation’s most intriguing wordsmiths, Alex Cameron. When talking about “Stranger”, McLean talks about the influence Cameron had on her, specifically his song “Stranger’s Kiss”. Cameron was moved by the song, saying it really vindicated what he was doing, and the two had a great conversation with Talkhouse you can check out here.

Roan Yellowthorn’s sophomore record, Another Life is out May 14th on Blue Élan Records. You can pre-order/pre-save it here.

Is it too early to anoint an album the best record of the year even if it has yet to see the light of day? The answer should obviously be yes, but the great Iceage, whom we’ve labeled as the best post-punk of the past decade, have released three stellar numbers in advance of Seek Shelter. Each song has been different, revealing a new dimension to their brilliance and adaptability. It began with the trembling, “The Holding Hand”, continued with a space odyssey in “Vendetta”, and then unraveled into a Brit-pop opus with “Shelter Song”. Now song four sounds like it was generated in the early 2000s at a time when Brit-indie was undergoing another renaissance. Heck, the song sounds like Iceage taking what we thought we understood and perfecting it.

“Gold City” is, well, perfection. A surging warmth brims through the track, as shimmering guitar riffs meld with an unexpected piano and harmonica arrangement (who would have the Danish quintet would include these two instruments in the same track 10 years ago or even 3 years ago?). As the song builds, an unexpected light opens up, as if Iceage have parted the darkening skies with their sonic optimism. While the sound has changed, Elias Bender Rønnenfelt’s poignant songwriting remains. But like the atmosphere around him, he, too, finds something to hold on to within these chaotic times. Whether that is the person, a group of people, or the city he calls home, he has found a reason to persevere. A reason to to give himself and all of us hope.

“First there was I, then there was us
Off goes the layers, as written in dust
What you have lost, I shall provide
All that you left behind, I’ll pick up the supplies”

Pom Pom Squad’s debut EP was short but sweet. Seven tracks including an intro and outro, it channeled a wide variety of styles. At times, it was reminiscent of contemporary artists like Soccer Mommy, at others it was a brooding, loud, and intense affair with a song like “Cut My Hair”.

Since then, Pom Pom Squad, led by vocalist Mia Berrin, have been working on their first LP, Death of a Cheerleader.  The imagery of the cheerleader is prominent throughout the band’s music. From the band’s name to the title of their latest single, “Head Cheerleader”, there is an intentional focus on the appeal of cheerleaders. What Berrin and Pom Pom Squad do on the track is turn that on its head. Berrin confronts the standards that young girls are held to, the idolization of cheerleaders, and how that makes someone who does not fit within “societal norms” feel. It is also about the freedom of escaping those ideals and embracing what’s truly inside, and done with a growing ferocity of a young woman about to make massive noise within the industry..

Pom Pom Squad are Mia Berrin (vocals), Shelby Keller (drums), Mari Ale Figeman (bass), and Alex Mercuri (guitar). Their debut LP, Death of a Cheerleader will be out June 25th via City Slang. You can pre-order/pre-save it here.

Thrillhouse seem to have a way of getting the listener to contemplate a bit about life and what matters with every song. Their newest single, “Just At The Right Time”, is no different. It is hopeful in regards to finding a special person in life and in perfect timing. The new track builds with fast paced guitar and an ’80s inspired chorus. The vocal style is most comparable to David Byrne, yet with a bit more urgency and fervor.

The lyrics point to those special moments of meeting someone that was needed in that exact moment.

Thrillhouse are Alistair Scott, Jackie B. Nielsen, and Sam Strawberry, who are holding true to their word and releasing new music each month in 2021.

As they head towards the release of their new album, Marriage, Swedish duo Wy continue to surprise us with each new track. We’ve described them as lush and memorable, we’ve heard them fuzz out guitars and get a little loud, and even dive into an ’80s vibe. Always interesting and never standing still, Wy surprise us even more with their latest single, “God’s Lamb”.

“God’s Lamb” is the closing track on Marriage. Many people talk about the importance of that final track. It’s the last chance to leave a lasting impression, it’s also rewarding to listeners who listen to the complete record. “God’s Lamb” is as impactful as any track we’ve heard from Wy. With just a bit of lo-fi guitar and seeming uncontrolled vocals, there’s an undeniable sense of emotion driving the track. It builds a bit, but not too far, keeping that raw intensity, but amping it up even more with Michel Gustafsson Ågren’s guitar solo and Ebba Gustafsson Ågren’s haunting vocals. It’s a perfect album closer, and we can’t wait to fill in the gaps when Marriage finally releases.

“God’s Lamb” is the fifth single from the duo’s forthcoming new album, Marriage. It arrives May 7th via Rama Lama Records. Pre-order it from the label’s store or Bandcamp. The other four songs are: “That Picture of Me”, “Come Here”, “Dream House”, and “Window”. 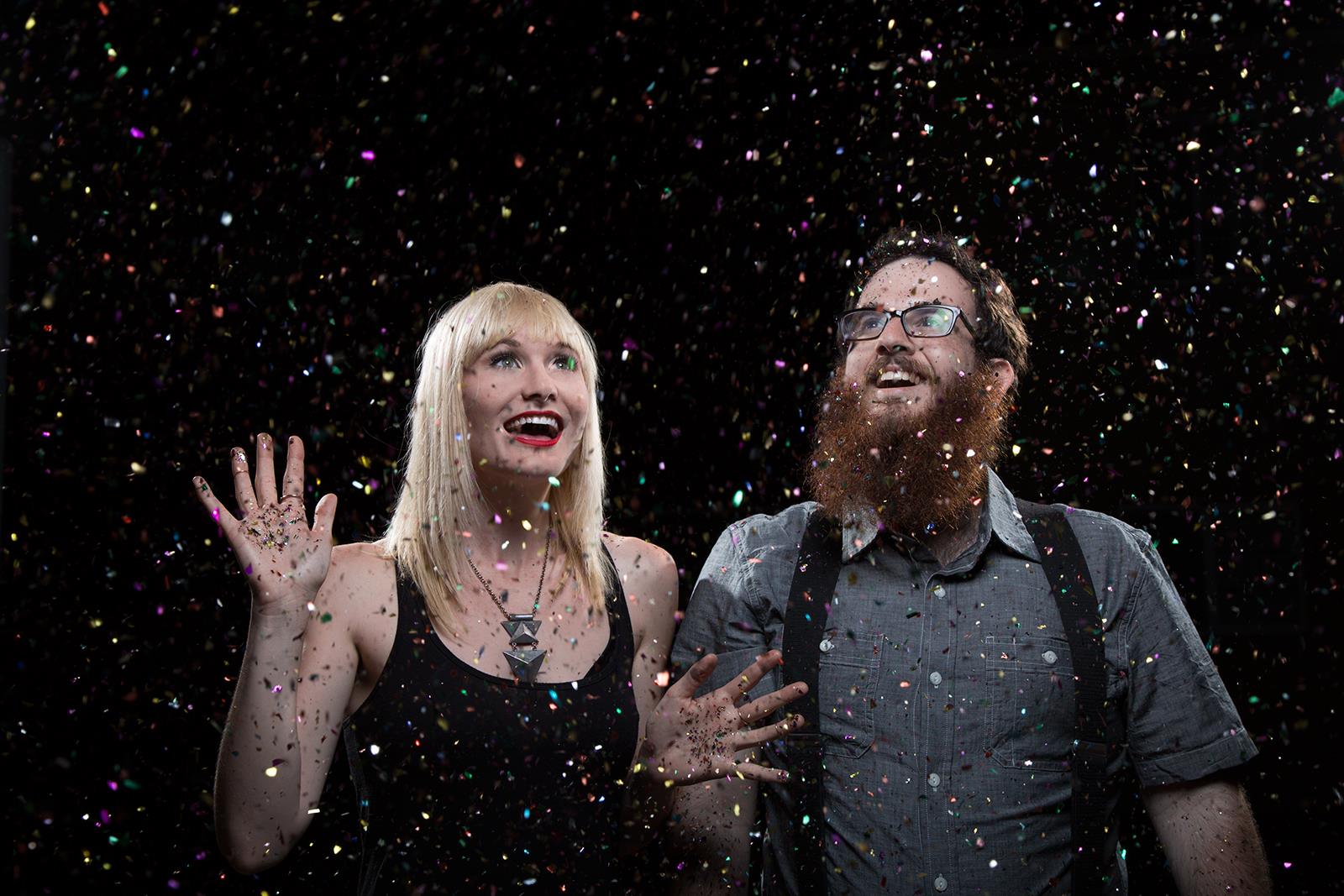