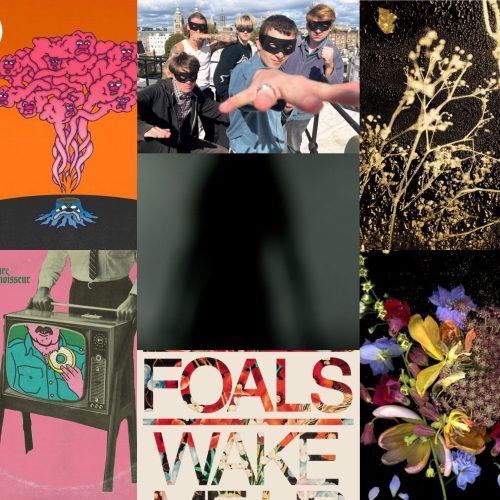 With so much great music coming out this week, we’ve opted to share two mini-playlists today. The Matinee ’21 v. 151a is focused on artists and bands from the UK, who deliver massive anthems and engrossing political messages. The seven songs are the jolt we need to arise from our extended stupor.

To hear Part B of today’s doubleheader, head over here. Hear all our favorite tunes this month on the Songs of November 2021 playlist, which can be found on Spotify and SoundCloud.

If the pandemic has dulled your senses and left you in a lifeless torpor, Foals are here to snap you back to reality. Their newest single “Wake Me Up” brims with plenty of high-energy exuberance the British outfit are known for.

Frontman Yannis Philippakis says he wanted the song to convey a “joyous explosion of energy” that will benefit us all. Indeed the song is a festival-ready hit. The anthemic chorus seems written with massive singalongs in mind, along with carefree dancing to these catchy riffs. This is the first music Foals have released since the departure of keyboardist Edwin Congreave. Even without his presence, the now three-piece band’s overall sound remains dynamic with guitarist Jimmy Smith and drummer Jack Bevan maintaining their full-throttle vitality.

When the group released their Everything Not Saved Will Be Lost twin albums in 2019, they could not have predicted how soon the world would mirror those LP’s darker tones. Will their upcoming 2022 release again portend our global mood? If “Wake Me Up” is any indication, plenty of sun-kissed, dance-filled days are in store:

I’m dancing on the screens
I’m dancing in the mountains where I’ve always been
Hey man won’t you wake me up?

I’m living through the ages,
I’m dancing on the tiles,
won’t commit to any handshake,
or believe a Duchenne smile”

“Wake Me Up” is available from these links. The band’s 2022 tour begins April 20th in Edinburgh.

The Golden Age Of TV – “What I’ve Been Through” (Leeds, England)

In the immortal words of Hans Solo, “Punch it, Chewy!” Or in this case, we holler these instructions to The Golden Age of TV in order to further turn this Friday into a wonderfully manic day. But unlike the Wookiee, the Leeds-based quintet are firmly in the pilot’s seat, as they take us on a raucous ride with “What I’ve Been Through”.

While the band has established a reputation for their upbeat and energizing indie pop-rock, they supercharge their sound on this number. Blistering guitars, machine-gun like rhythms, and front-woman Bea Fletcher’s booming and crushing vocals are all dialed up to the nth degree. And it’s all awesome, providing the perfect natural adrenaline booster we need on a Friday. This tune is meant to lose ourselves in for hours.

The track is also one intended for women to raise their voices and stand their ground. As despite the whirling, frenetic, and anthemic vibes, the tale concerns the sexual violence thousands of women, including Fletcher, experience daily. So as you feverishly dance and jump around, let Fletcher’s words stick in your mind for eternity.

“Defence, on the defence before anythings happened
Don’t look at me for too long it puts me on edge
I know, I don’t know I’m not a violent person
I guess it all depends on what I’ve been throug”

The Golden Age of TV are Bea Fletcher (vocal), Ryan Bird (guitar), Sam Carty (guitar), Ciaran Scanlon (bass), and Josh Ketch (drums). This band is on the verge of exploding.

Those who have been following us know we love a tune that blends propulsive post-punk with indie rock. Some of our favorite bands of the past decade masterfully teeter this fine line. We’re going to have to add DEADLETTER to this list, as these fellows from Yorkshire are matching the seismic power of The Clockworks, Bambara, and Slaves. This should eventually yield the quintet a cult following. Actually, they already have a cult following, so the next stop for them is headlining their own tour and becoming indie stars. Accelerating their path to this eventuality is “Pop Culture Connoisseur”.

Heavy rhythms drive this maddeningly infectious tune, where involuntary head banging ensues almost immediately and intensifies as the song progresses. Slicing through the pounding drums and probing bass line are searing and angular guitars that simultaneously add more starkness and an anthemic quality. Swirling through the noise is front-man Zac Lawrence’s booming baritone, who sings about how an innocent act can create an uproar within the community while more heinous occurrences are ignored.

Specifically, his tongue-in-cheek story centers on PC Read, a police officer fired for stealing doughnuts through a self-service checkout. And yet on the television, a man who is completely immersed in populism is creating havoc. He is devoid of integrity because he lives his life as all sorts of characters in order to divide people. Just goes to show how we, as a people, have our priorities completely messed up. Fortunately, we have bands like DEADLETTER to keep us in our place.

The band consists of Zac (Vocals), Alfie (Drums), Will (Guitar), James (Guitar), George (Bass), and Tom (Saxophone). The single is out on Nice Swan Records.

It’s hard to believe that Archive are approaching their 28th anniversary as a band. While they have been receive widespread acclaim, they might be the most underrated trip-hop band in history. They’ve been overshadowed by Portishead, Massive Attack, and Tricky, but Archive are their equals. The one thing that separates them from the others is that they have consistently tackled political issues. While the band’s composition has changed over the years, they’ve never been afraid to address social and political issues. The London-based collective, as such, might also be one of music’s most underappreciated political bands. Offering a reminder of their engrossing art and powerful messages, Archive return after a five-year hiatus (not including the 25-year compilation and remix album they’ve released the past two years) with a dazzler.

“Shouting Within” is an absolute stunner. It is trip-hop made both widespread and spatial. The combination of the piano and the deft beats and effects give the track both a suffocating aquatic feeling and a breathtaking interstellar sound. In either situation, we are left to gasp for a breath, completely enchanted by the delicate and intimate approach and Holly Martin’s embracing vocal. We are also left to wallow in despair in the realization of how we’ve become immune to the crumbling of our world.

THE NINTH WAVE – “What Makes a Man” (Glasgow, Scotland)

When the Scottish Music Awards finalists were announced last week, we were surprised to now see The Ninth Wave on the list. Granted, they didn’t release an album this year, but they’re one of the best live bands around. Heck, they’re just one of the best bands around. Period. They’ll one day win a SMA or even Scottish Album of the Year because they’re released several memorable songs, including “Swallow Me” and this year alone with “Maybe You Didn’t Know” and  “Piece and Pound Coins”. The quartet further build their case with “What Makes a Man”.

This brooding yet glorious rocker sees Millie Kidd assume lead vocal. Despite her restrained delivery that is Kate Bush- and Chelsea Wolfe-esque, an intensity seeps beneath. With the Gothic post-punk-infused darktronica bursts in the background, Kidd sounds like she could unleash another side to her. To unleash her Ms. Hyde upon us, which is the form that Haydn Park-Patterson assume as the backing vocalist. The interplay between the two is brilliant, resembling two sides of the same individual dancing like the Joker on the step stairs connecting Shakespeare and Anderson avenues at West 167th Street. Their lyrics, too, mimic this scene, of a person about to get their vengeance.

IDLES has an unparalleled track record for impactful, relevant, and great albums over the last few years. 2018’s Joy as an Act of Resistance and 2020’s Ultra Mono spoke to the anxiety of the late 2010s, from immigrant crises, to racism, Brexit, war, and global political instability. Joe Talbot and crew’s ability to turn those anxieties into moments of triumph and power through song is what makes IDLES one of this generation’s greatest bands. In 2021, they’re positioned yet again to take make that case with their upcoming record, CRAWLER.

Not exactly known for their soothing songs, “Car Crash” is may be one of IDLES’ most confronting sounding songs yet. Guitar noise and sparse, stomping drums make up a good portion of the song’s composition. Talbot’s voice gets consumed by distortion, resurfacing only for a few moments before being dragged in once more.  There’s an ethereal feeling towards the end, before it all explodes into some of the heaviest stuff we’ve heard from IDLES.

The song concerns a car crash that almost took Talbot’s life. Guitarist Mike Bowen said, “We wanted it to be as violent as possible to reflect that event”.  Everything about the track captures that feeling, from the loud moments to the intentional degradation of sound as the song progresses. It also captures the reflective moments after such a serious event.

Shame – “This Side of the Sun” (London, England)

Earlier this year, Shame released one of the year’s great albums in Drunk Tank Pink. It was a proclamation from the London band, who had released a fantastic breakout debut Songs of Praise in 2018. It’s hard to follow up great debuts, but Shame absolutely did it, and added much more to their sound. Three years brings a lot of experience, and the more refined, dynamic, and diverse sound on Drunk Tank Pink proved Shame are here for the long haul. They also released a live record Live in the Flesh in April, which had some extra energy behind it.

Just before the year ends, the band return with another fantastic single, “This Side of the Sun”. Immediately, listeners are greeted with some great guitar riffage. Charlie Steen’s voice is a perfect complement to the raw sound provided by the song’s instrumentals. It’s the band’s first “live” studio track, taking a lot of that extra energy that was heard in Live in the Flesh. The band described it best when they said, “It’s a pure banger, listen with a piña colada in your left hand.” But more than that, it’s the wake up call we need, making us realize that the darkness does eventually fade away.

Shame are: Charlie Steen, Eddie Green, Charlie Forbes, Josh Finerty, and Sean Coyle-Smith. The single is out on Dead Oceans.

The Matinee May 16th