If Monday’s mini-playlist felt like a Friday, then The Matinee ’22 v. 014 continues the party with another extremely diverse selection of new music. Nine songs from 8 artists and bands from around the world are featured today.

These songs kick off our Songs of February 2022 playlist. It’s short for now, but give it a follow on SoundCloud and Spotify to hear what new tunes we’re digging every other day.

Our introduction to Another Vision happened in November when Moritz Kristmann and Michael Schmückin shared the intergalactic “Rieger”. It was a song that personified Vienna’s music – the perfect marriage of its classical music history and burgeoning electronic scene. The duo, however, are not stuck in the past but rather they’re forward thinking, exploring how they can make every song an experience. They once again live up to their name with “Swipin”.

Swirling, hazy electronica merges with intoxicating dream-pop on Another Vision’s latest single. A beautifully lingering guitar and stuttering percussion open the track, luring listeners in with a lush opening. Analog synths and additional production gradually enter the atmosphere, and the track transforms from classic to futuristic. In the process, the drama escalates with Kristmann’s vocal subtly intensifying. His voice mimics billions of people’s experiences today, specifically those who lose themselves in technology and, thus, become separated from reality. Their world resides in the images of Instagram, the reels of TikTok, and the video games played on computers, television screens, and mobile phones. Our only connections are virtual, and our humanity slowly fades away.

It’s time to stretch your legs and get the blood flowing. More importantly, it’s time to pull yourself away from whatever you’re doing, clear your mind, and be yourself. To help us put one foot in front of the other or maybe even to bust a move in the office is Mae Mae, the Atlanta native who recently released her debut EP, Gummy Heart Eyes. Filled with catchy, indie-pop-inspired tunes, the mini-album’s highlight is “Imposter”.

Indie-pop, synth-pop, funk, and disco-pop come together on this immensely addictive tune. A methodical groove welcomes the listener, as the percussion and the shallow synth tickle in the background. It causes us to move cautiously forward, but as the tempo quickens and the instrumentation builds, our movements quicken. We’re no longer crawling but moving quickly to somewhere. But neither our legs nor arms are moving. Rather, our minds are racing, as we begin to focus on Mae Mae’s lyrics. “So sweet / Maybe I’m a monster, an imposter”, she sings. Despite the saccharine quality of her voice, traces of mystery and cynicism are etched in her voice. “I’m a little bit lost in words but no one can keep me quiet”, she reveals her true identity in the end. For that matter, she rips away all our costumes and tells us to stop pretending to be someone else.

Spin Mae Mae’s EP at these links and allow your true self to shine. It’s a great way to get through another hump day.

We’ve mentioned this before but it’s worth repeating – watching a band evolve is one of the most rewarding aspects of doing The Revue. For instance, when we were introduced to Goon five-and-a-years ago, they were creating cool, intelligent indie rock in the Kurt Vile mould. Their music has largely been energetic and sometimes explosive. So when the Kenny Becker-led group announced the release of “Garden of Our Neighbor”, we were taken aback for a moment because the song was unexpected. Instead of the grizzled indie rock of the mid-2000s, the band turned the calendars even further back, heading to the ’90s and the days of sadcore. In the process, they have created a gem of a song.

Mournful yet stunning, introspective and contemplative, the song is the meeting point of Sparklehorse’s intimate ballads and Red House Painters’ poignant omissions. The restrained approach gives the track is its emotional center, highlighted by the dissonant, shoegaze guitar. Becker, though, is the track’s heart and soul. His fragile voice seems to be on the brink of breaking apart, as he shares a personal moment along the seashore. He sounds like he is ready to jump in and allow the cold Pacific waters engulf him. The moment is vulnerable, but intimately and beautifully told.

Australia and the US have pretty much monopolized the arena of off-the-wall, mind-bending psychedelic rock. While a handful of bands from outside these two countries have attempted to join the likes of King Gizzard and The Lizard Wizard, Osees, and Ty Segall, most are only able to sustain such high levels for a song or two (although Kikagaku Moyo are also at this elite level). Could Spanish outfit Shaman Shaman be the ones who break this stranglehold? It’s too early to draw a definitive conclusion since the band have been together for barely a year. However, their newest single definitely puts the psych-rock world on notice.

Get ready to lose your proverbial shit with “Sisyphos”. This song rocks. Feverish guitars, full-throttle drums, and a hammering bass line ignite the air. While Shaman Shamam are just three dudes, they sound like a massive septet. Imagine what they would sound like with one or two additional guitars and a dedicated keyboardist? The sound demonstrates the potential of the band. They’re not, however, one-trick ponies that know how to put together a great riff and an awesome rhythm section. Alfredo (drums), Pascual (bass) and Pons (guitar, keys, vocals) are also intelligent guys, as they use the mythical Greek king as a symbol of how they have long cheated death.

“Living for a plan
greater than you can understand
I really wish I could quit this shit but
I’m stuck in this fucking labyrinth.

He also cheated the almighty Zeus because Sisyphos refused to give in.

“Free yourselves
Consciousness
Except change nothing is permanent.

Cause we all might fall – oh no
on our daily roles – I guess but
NEVER STOP FIGHTING FOR WHAT MAKES YOU FEEL ALIVE.”

Those are words to live. Simply awesome. We have another Spanish band to keep a very close eye on.

Just when you start to think the musical powers-that-be threw out the cookbook when LCD Soundsystem was born, a new-ish band arrives and has you doing double takes. That group is AUS!Funkt, who like the James Murphy-led outfit, are beyond labels because they are a mishmash of genres. They simultaneously occupy disco, art-punk, funk, indie rock, and electronica, but they never dabble too long in any one space. This combination of sound and this specific trait of never being stationary are what could make Miroslav Miskovic (aka Jozzef Ladovina), Evan Henderson, Olivia Korwan, and Hugo Frutuoso stars. Or at the very least, they’ll become favorites of the underground scene thanks to songs like “Take Your Sense Back”.

This single is outstanding. Every element captures one’s attention – funky bass line, the impatient drumming, the swirling synths, and the echo of the electrifying, delayed guitar are all perfectly executed. Together they create a wondrous whirlwind of sound that sucks us into its vortex and keeps us there for its nearly 6-minute duration. But why would anyone want to escape this sonic wonderland that helps us rediscover who we are by taking us away from this reality filled with imposters? This is the rare song that truly makes us feel liberated. Makes us feel alive. To stay in this place, just keep the song on a loop, and it will sound like it is meant to be infinitely spun. And that’s a good thing.

The song is taken from AUS!Funkt’s new EP, Post-Stagnation, which can be picked up on Bandcamp.

Dana Gavanski‘s debut record, Yesterday Is Gone was a gorgeous and creative folk record with a powerful voice behind it. Sadly, in 2020 Gavanski suffered issues with her voice. For a singer, that’s among the worst things that could happen. It’s something that may have made other songwriters give up. However, Gavanski took it as a challenge, to work around, cooperate, and overcome those issues.

On her latest single, “Indigo Highway”, we hear a new Dana Gavanski. Her voice is still impactful, if different. The song sounds more playful with its simple bouncy synth and piano keys. The song has a youthful quality to it, and that adds to its charm. Gavanski says it’s about a person from her childhood, and the memories with them. Paired with “Letting Go”, released last year, it seems like Gavanski’s upcoming record When It Comes is a reinvention for the artist, and a statement that she still has so much art to create.

Gavanski’s sophomore album, When It Comes, is due April 29th via Flemish Eye Records and Full Time Hobby. Pre-order/pre-save it here.

As most know, it’s summer Down Under, which means much of the music has a sunny disposition. This is perfect for those in the Northern Hemisphere who are enduring the chilly days of February because that means music to warm us up. Since their formation in 2014, Skegss have been known for turning up the temperature with their music. Their early years brimmed with fun-loving and energetic surf-rock and garage-rock. But as they’ve gotten older, they’ve found new ways to bring the heat. Or in the cases of “Stranger Days” and “December”, they deliver songs that are more like comforting blankets.

On the former, they turn to Americana-rock a la Noah Gundersen and create a terrific, bonfire sing-along. The song is like a calm breeze at first before it hits the euphoric chorus of “ah ah ahs”. This simple refrain, though, isn’t what draws us into the track (it just offers a moment for everyone to join the band). Instead, it’s Ben Reed’s optimistic message that we can still live our lives in these “Stranger Days”. As he tells us, “May your dreams never die” no matter what lies ahead.

With “December”, Skegss deliver a little jingle that is made for Christmas. Even though that’s 6 weeks passed, the message still rings true today. With a jangle-rock approach akin to their cousins, Spacey Jane, the band sing about reunions with family and friends, from whom they’ve been separated for years. “You don’t know how much I’ve missed this / I’m just so glad it’s Christmas”, Reed sings. So grab your loved ones and remember these moments with them are precious because who knows when we’ll see them again.

Skegss are Toby Cregan (upright bass), Jonny Laneway (drums), and Ben Reed (vocals, guitar, synth). The songs are out on Loma Vista Recordings. Streaming and purchasing links are available here as well as on Bandcamp.

Palberta’s Lily Konigsberg and Water From Your Eyes’ Nate Amos put together a great EP last year as My Idea. That’s My Idea was a great combination of folk and pop and full of intelligent songwriting that we’d expect from the duo. It’s a great way to spend 15 minutes.

Thankfully, the duo have announced they will be releasing their first full-length record, Cry Mfer, and released its title track. “Cry Mfer” builds on the foundation laid on that early EP. A hypnotic guitar part intertwines with ambient synth, and Konigsberg’s voice makes the song’s early moments quite inviting. It doesn’t change up too much from there, and it doesn’t really have to. With more time on their hands, it feels like the duo can explore even more types of sounds. It’s so easy for a listener to get lost in this song, especially as it just loops itself into its conclusion. The song is about Konigsberg needing to make a change, and trying to navigate through that.

Ouch
I was needing something”

The duo’s new album, Cry Mfer, is out April 22nd via Hardly Art. Pre-orders available here and on Bandcamp. 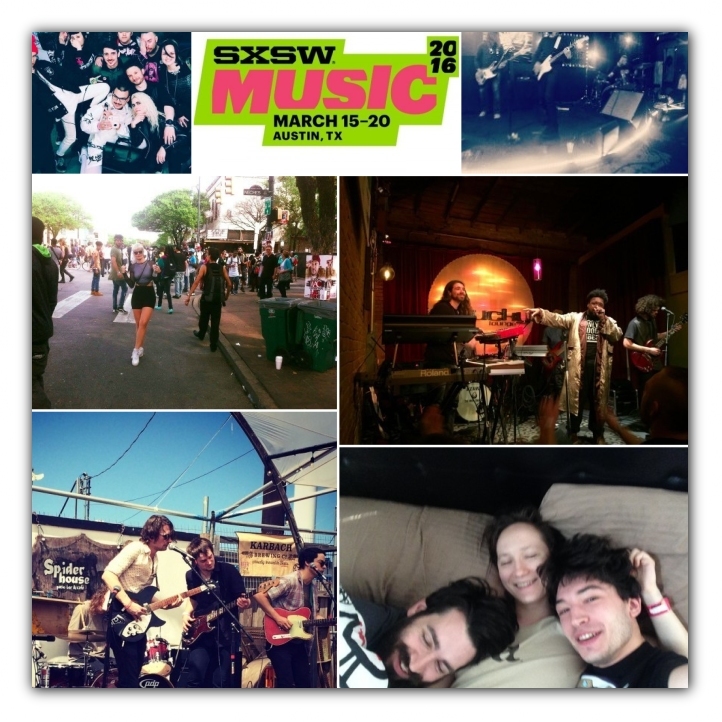