The Matinee ’21 v. 045 is a feast for story lovers, as each song offers vignettes of the places we call home and the people who occupy them. Let this mini-playlist stimulate our collective minds as we set out to change the world.

We’ve long stated that women are making the best and most innovative music on the planet. You don’t need to look at recent Grammy winners to realize this. If you want to get at the front of cutting-edge music and discover the world’s next Billie Eilish and Phoebe Bridgers, then pay attention to the indie scene. There you’ll discover the stellar talents of feeo, the next big thing coming from England.

The young Oxford singer-songwriter isn’t making the same pop music that typically dominates airwaves. No, she’s going off-script, fusing jazz, blues, pop, R&B, and soul into a heady sonic cocktail while telling incredible stories. Think a young Sade, who likewise created her own niche to become a star. It might take feeo a few years to receive the attention she deserves, but “End Song” will hasten that process.

Inventive, creative, and brilliant are all understatements of feeo’s genius on the track. At times the song is calm and sultry, then gritty and urgent as the synths and rhythms get heavier. These dynamics represent humanity’s chaotic history where we’ve done more harm than good. Wars, greed, and selfishness have dominated our existence, something feeo poignantly tackles here. Her songwriting is impeccable, filled with lyrical gems:

Then she ironically yet cleverly makes a pop culture reference to describe how she’s feeling:

Her debut EP, it feels like we’re getting older doesn’t it, arrives June 4th. This song is streaming on Bandcamp and these other sites.

Two years ago an Australian band made a global splash with their impossibly catchy retro pop sound. Melbourne-based Quivers wowed listeners from Seattle to Stockholm (we’re guessing on the latter, though it’s highly probable) with the breezy hit “You’re Not Always on My Mind.” A couple of R.E.M. covers and a pandemic later, the four-piece band will soon deliver a new album. Golden Doubt is their long awaited follow-up to their 2018 debut LP, and the lead single features the sunny jangle pop that fans love.

“Gutters of Love” reminds listeners of the euphoric rush of new love. These bright hooks and soaring harmonies trigger the fleeting emotional butterflies that never last long enough at the start of a relationship. Anyone who has experienced that endorphin rush knows a crash eventually follows. Frontman Sam Nicholson may be singing from the perspective of the gutter when “the serotonin’s gone” but you can’t help but feel encouraged by the song’s ebullience. Quivers have the Midas touch when it comes to crafting perfect pop songs. “Gutters of Love” is another instant classic worth spinning repeatedly.

Golden Doubt arrives June 11th via Ba Da Bing (US), Bobo Integral (Europe), and Spunk Records (Australia). You can pre-order it at Bandcamp.

The Clockworks – “Feels So Real” (London, England via Galway, Ireland)

Even in today’s shrunken world where the internet connects us all, bands and artists still need to move to the big city to be heard and hopefully breakout. The Clockworks are no different. Despite being named on several Artists of Watch lists for 2020 and 2021, including our own edition, James McGregor (vocals, guitar), Sean Connelly (guitar), Damian Greaney (guitar/drums), and Tom Freeman (bass) packed their bags for England’s capital, leaving behind the picturesque harbor city of Galway. Will London’s bright lights subdue the quartet, who have rightfully gained the reputation as one of the best, young post-punk bands on the planet? Their first single in their new residence might offer clues, and fortunately not too much change.

“Feels So Real” is another banger that sees The Clockworks’ sound evolve. Instead of a thunderous wall-shaker, the band deliver an adrenaline-inducing Brit-rocker made to fill the cavernous spaces of the O2. What has not changed, though, is McGregor’s intelligent and observant songwriting.

While most people would write an ode that expresses their naive love for their new home, McGregor does the opposite. He instead sings about London’s decay and ills. Growing social inequality, brittle infrastructure, drug and alcohol addiction everywhere, and crime around every corner. “There’s a buzz in the air by the glow of the lamps / The city’s a lady, the city’s a tramp”, he sings from the get-go, warning us that this once grand city is a shell of its former self. Fortunately despite the move, The Clockworks have not succumbed to the same fate of London. Instead, they’re only getting better.

The track is out now on Alan McGee’s renamed It’s Creation Baby label. Hopefully a new album is coming this year.

It’s not very often that a track dumbfounds us. By this, we mean trying to articulate the band’s approach and identify comparables, and this is a good problem to have because the song is fresh and unique. It gives us another reason to get excited about music’s future, in which “newcomers” Mellowpunk should be a fixture for years to come.

Devin Noth, Sage Garrett, Ethan Minard, and Maddy McClure are the typical band in terms of how they formed – college kids who share the love of music, the desire to create and perform, and a keen sense to innovate. With that attitude, then can concoct a single like “We Need To Talk”.

The song does require patience, and one will be rewarded for it. “We Need To Talk” commences in a quiet unusual fashion – slowly and patiently like a Japanese jazz lullaby (and there is even a bit of Japanese in the track). The light melody is immensely relaxing and hypnotic, and McClure’s voice adds to the serene atmosphere. She sings about two people growing apart and avoiding having the dreaded conversation. Just as McClure is about to reveal about is to happen, the atmosphere abruptly changes. A trippy, groovy vortex has consumed the air, but this doesn’t last too long. The track then transitions into a heavy, gritty, synth-driven approach to mimic our arrival to a new place – or more accurately, to reflect the turmoil in the protagonists’ experiences. Just simply a clever piece of musical literature.

Mellowpunk’s debut album, I Don’t Think Two People Could Have Been Happier Than We Have Been, is out this Friday, March 26th. Pre-order it on Bandcamp.

If there’s one thing that’s obvious about Lindsay Baffo’s music, it’s that she likes to have fun with it. Her new record I Should’ve Stayed Home is a fun, smart, and incredibly relatable record. From songs like “Drunk at Target”, and closing the record with a punk-infused cover of Aerosmith’s “I Don’t Want To Miss A Thing”, Lindsay B.‘s latest record is quite an enjoyable ride.

“What’s The Craic?” is a single from the album, and contains all of the qualities that makes Lindsay B. such a compelling artist. It starts out immediately with an explosion of sound, a heavy distorted guitar riff and some even heavier drumwork lay the foundation. Baffo’s lyrics hit a sweet spot as well, a bit slacker-rock, self-deprecating at times, but honest. It’s a relatable tune, the struggle to get off the couch, the drunk texts, the hangovers. The heavy tone doesn’t fade, in fact it gets even louder and reaches some incredible heights with some wild guitar noise and even more intense drums. It’s a really fun track and a perfect introduction to Lindsay B. and I Should’ve Stayed Home.

“What’s The Craic” is accompanied by an equally fun music video reminiscent of a birthday party, balloons, face painting, and a mess of sweets all included.

Lindsay B.’s new record, I Should’ve Stayed Home, is out now. Get it on Bandcamp.

Allison Russell is the name to know right now. There are dozens of reasons why this rising Scottish-Grenadian-Canadian star ranks high on our 2021 Artists to Watch list: she is a visionary talent destined to make lasting contributions to music. We first loved her when Birds of Chicago (her project with partner JT Nero) toured with Rhiannon Giddens several years ago. That appreciation deepened at Newport Folk Festival when she performed with Giddens as part of Our Native Daughters. Her upcoming debut LP, Outside Child, is already an Album of the Year contender based on this song.

If you don’t fall in love with “Nightflyer,” perhaps a visit to a medical professional is in order? Trust us: you will want to bask in the warmth of these sunset-hued tones. Russell’s mellifluous vocals are mesmerizing. She imbues each note with the carefree elegance of Sade and the southern charm of Giddens and Valerie June. Intimate and empowering, Russell’s lyrical imagery is its own poetic gift sure to leave listeners awestruck:

“I’m a midnight rider
Stone bonafide night flyer
I’m an angel of the morning, too
The promise that the dawn will bring you

I’m the moon’s dark side, I’m the solar flare
The child of the Earth, the child of the Air
I am The Mother of the Evening Star
I am the Love that Conquers All”

It is impossible to summarize “Nightflyer” in a single word, though stunning comes very close.

Outside Child arrives May 21st via Fantasy Records with pre-orders here or from Bandcamp.

Despite nearly five years entertaining people with their uniquely Neo-psychedelic desert noir Americana sound, Bad Flamingo remain a mystery. The Nashville duo prove – like Zorro did long ago and Orville Peck does now – that a mask and a hat are effective identity blockers. Perhaps someday they will be unmasked, but for now we’ll just enjoy their great artistry and musings on “Mama Raised You Right.”

The track could be the antithesis to Ed Bruce’s classic, “Mamas Don’t Let Your Babies Grow Up to Be Cowboys”, that Waylon Jennings and Willie Nelson each covered. Specifically, Bad Flamingo seem to salute the nearly obsolete old western hero. As trumpets occasionally pierce their psychedelic folk-country approach, they deliver an anthem for the lonely wanderer crossing the desert with her trusty steed. This is where she finds solitude and answers after fending off bandits, murderers, and all sorts of villains in her life.

She is the hero we long need, but she refuses to heed our calls because she has her own issues. She is, after all, a lone ranger who was taught at an early age not to start a war unless absolutely necessary.Too bad some leaders weren’t taught his important lesson, which is why we need masked heroes like Bad Flamingo around.

This single is streaming now on Apple Music and Spotify.

Thrillhouse continue to produce something familiar yet also fresh and new. “Where The Roads Don’t Go” is the latest from the Brighton trio who have a goal of releasing a new track each month during 2021.

Here the keys take the forefront, supported by the bass and guitar. When the chorus kicks in, listeners are taken on a blissful and melodic ride. The song will have you questioning your life’s purpose, with lyrics that address personal individuality and expectations society or others may have for you. Lines like

“But I close my eyes I can almost see / But I’m still not sure / Do I really want what I’m searching for?” resonate with listeners of all ages. Meanwhile, “Is it all right to be living someone else’s dream?” packs a deep punch you will be pondering long after the song ends. This lyric encapsulates the magic of Thrillhouse. Their sound could be plucked from the soundtrack of your favorite ’80s movie, yet it’s fresh and endearing.

This song is streaming now on Spotify.

Thrillhouse are Alistair Scott, Jackie B. Nielsen, and Sam Strawberry. 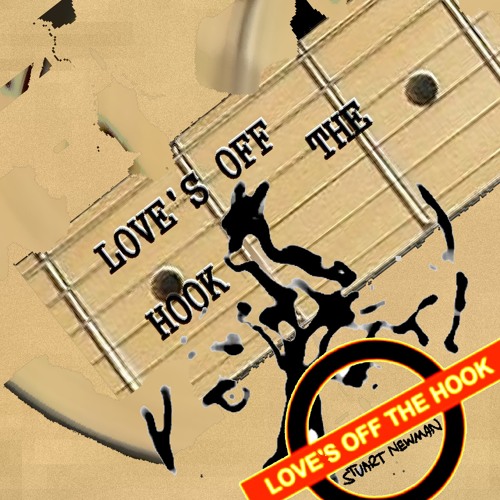 Stuart Newman – “Love’s Off the Hook”