Whether it is through a rollicking punk approach, a throwback ’70s sound, or stirring darkness, The Matinee ’21 v. 126 features surprising intimacy. It all begins with a duo about to make huge waves this year and ends with a band that has been on top for some time. These songs are on our Songs of September 2021 playlist, which can be found on Spotify and SoundCloud.

After nearly three years away, London trip-hop / darkwave duo Dahlia Sleeps returned with a stunner in “Divided”. It was, as we called it, “ethereal purity” and the perfect mid-summer surprise. With September a week old, they offer another treat with the announcement that their long-awaited debut album, Overflow, will be released October 19th. To say we’re overjoyed by the news would be an understatement because Lucy Hill and Luke Hester are the rare band that can make you feel not just the heart and soul of the song but that you are its heart and soul. And they put us at the center of “Too Good To Hide”.

Whether one has long been on Dahlia Sleeps’ bandwagon or just joining it, the song perfectly encapsulates the duo’s breathtaking brilliance. Within the sparkling darkness lies a shimmering light, which is represented by the tingling guitar, the tranquil strings, and Hill’s sublime voice. She is our savior, saving us from the grief that consumes us. Saving us from ourselves.

“Don’t smile at me
I don’t believe you’re so at peace inside
You chase the dream
Of fire, of grief, of your unease of mind
I have a lot of things to learn
Watching you hate yourself but
I’ve got time to
Fall in line just
Lose some pride”

We only have 5.5 weeks to wait for Overflow. Then in early 2022, the band will released the album’s B-side. Today is just filled with great news.

With five albums released in their 15-year career, darkwave / dark-pop duo Kraków Loves Adana are undoubtedly one of the most overlooked modern bands. Maybe in another era, specifically the mid-’70s to early-’80s, they would have been legendary. Deniz Cicek and Robert Heitmann’s longevity demonstrates they’re not in this for fame. Rather they make music out of pure love for the art and because they have stories to share. Sometimes these stories have been set aside and even buried to be forgotten. Over time, they develop their own personalities and become stories themselves, such is the case with “Follow The Voice”.

Written years ago and reworked numerous times, the song was a challenging affair. Cicek and Heitmann stripped it back to its origins, and the result is a track that personifies Kraków Loves Adana’s enrapturing darkness. A primal quality exists in the band’s music, highlighted by Heitmann’s guttural guitar and the stark synth. There is, however, illumination, in the lingering keys and Cicek’s dynamic vocals. The confrontation is like a fall morning covered with dense fog with the sun trying to pierce through the clouds. In this scenario, it is Cicek wading through the malice that has overwhelmed her being. It is the light inside her trying to break through the bleakness:

The duo’s new album, Follow The Voice, is out November 12th. Pre-order it on Bandcamp.

No matter the subject, Amyl and The Sniffers only know one way to perform and that is with fury and energy. It’s one thing to rage about one’s bullshit, like they do on “Security”, or about the unforgiving silence that accompanies numerous lockdowns, which they tell on “Guided by Angels”. It’s another thing to get angsty on a romantic getaway with one’s partner, but that’s what the band do on “Hertz”.

“Take me to the beach / Take me to the country / Climb in the back seat / If you love me”, frontwoman Amy Taylor hollers over the feverish and frenetic arrangement provided by her band mates Bryce Wilson (drums), Dec Martens (guitar), and Fergus Romer (bass). Like pretty much all their songs, this one is more made for moshing that slow dancing. Heck, it’s not exactly made for an intimate night, but it sure will get the heart pounding and the sweat dripping from your forehead. Then again, maybe it will spark the flame between two lovers, just in an unexpected way. In an Amyl and The Sniffers way.

The quartet’s new album, Comfort To Me, drops this Friday, September 10th via Rough Trade Records and ATO Records. It can be pre-ordered here and on Bandcamp.

Do you ever have dreams so vivid you can recall every detail upon waking? When the elements of those dreams – the sounds, the textures, the aromas – bring pleasure, you wish you knew how to return and experience it again. Music often provides an entry point to those worlds. This song from French group Gondhawa seems capable of transporting to the places of your dreams.

“Raba Dishka” defies genres in the best way. Its seamless fusion of afro beats with progressive psych rock is a head-spinning adventure. The energy here is irresistible. You hear hints of past and present, from Fela Kuti to Khruangbin. Complex rhythms awaken your senses while the lyrics transcend language barriers. It does not matter if you cannot comprehend the words as the message is universal. The song seems to invite listeners to awaken their souls, embrace the present moment, and explore the possibilities that life offers. Perhaps those elements are the keys that unlock the door to dream worlds. “Raba Dishka” is a bridge to those worlds: its rhythms and grooves are the path while its textures offer directions.

This song is one of six tracks on the band’s debut album, Kâampäla. The EP arrives October 1st via Stolen Body Records with pre-orders here and from Bandcamp.

Can anything stop the runaway engine that is Holly Humberstone? The 21-year old singer-songwriter is on the cusp of hitting 100,000 followers on Instagram, and she’s done it all organically. Yes, she’s now signed with a couple of big labels, but as she’s proven time and time again she is still very much in control of the process.

Instead of rushing to release an album, she has released new songs incrementally. More importantly, she’s writing meaningful stories and messages instead of the usual lusting or heartbreak tales. Consequently, there is an immediacy to her tracks, as evidenced on “The Walls Are Way Too Thin”, “Haunted House”, “Overkill”, “Deep End”, and “Falling Asleep at the Wheel”. For her newest tune, she dedicates it to her best friend. “Scarlett”, however, also feels like it was written to us.

Humberstone’s trademark pop-rock approach is the antidote to our ills. The gentle waves of guitar, electric drums, and synths are therapeutic, lifting our spirits and allowing us to life momentarily in “blissful ignorance”. Her lyrics, though, are the cure to our wounds. She tells Scarlett that the pain in her heart is temporary, but one thing that is enduring is their friendship. Humberstone then does what best friends do – she takes her best friend’s place and utters the words Scarlett could not. She lets Scarlett know that she is not alone in how she feels. This is what makes Humberstone a star in the making.

The single is out via Darkroom/Interscope and Polydor Records.

Few can turn restraint into a piece of enrapturing, stark, and powerful music. Lillie West, though, is one of those rare artists who can turn subtlety into an inescapable sonic vortex. Her outstanding 2018 album, The Lamb, as Lala Lala showcased her emotional artistic brand. She further demonstrated her exceptional talent on “Color of the Pool”, and once more she leaves us weak in the knees on “Prove It”.

A raw brittleness rings through the track with its lo-fi production and slowcore approach. The guitar weeps, the rhythms tremble, and West’s voice aches with the pain of someone seeking to reclaim her position. To reclaim herself from those who seek to control her. At the same time, she realizes the other person is no different than her, and that her rival could very well be her.

“Virtue is a fickle road
I walk the line of something uncontrolled
you and I sleep alone
I wish that you would follow me, follow me, home”

Tasha’s 2018 debut album, Alone at Last, was an all too brief preview of her creativity. Featuring mostly just guitar and vocals with a spoken word track to open up everything, Tasha found a way to do a lot with very little. In 2020, her song “But There’s Still The Moon” became a bit of a break-out hit for the Chicago-based artist. With a lusher sound and more refined production, it was impossible to not be captivated by the track. Even more importantly, it showed us what sounds might be next for the singer-songwriter.

Tasha’s latest single “Perfect Wife” adds more variety and feeling to her catalog. It’s a nostalgic track in many ways, from the lyrics, to the jazzy style, to its instruments. Tasha has absolutely nailed the sound she was aiming for.  It’s a sweet love song on the surface, about dancing the night away with your lover. Add in some great guitar work and even a little flute, the whole thing just sounds really good. It’s a big shift from her first record, this big lush track compared to just her and guitar. Sometimes things can get lost in a big shift in sound, but “Perfect Wife” truly amplifies Tasha’s creativity.

Tasha’s sophomore record Tell Me What You Miss The Most will be out November 5th on Father/Daughter Records with pre-orders here.

Over two EPs and some singles ahead of the release of her debut record, Bauhaus, L’Appartamento, it’s become obvious that Julia Bardo is creating something special. The songwriter has a knack for creating compelling art while mashing the styles of some of the best voices of early 2000’s alternative with ’70s-era songwriter pop.

On her latest single, “Impossible”, Bardo continues on that track while adding even more flair to her sound. The song begins with an almost jarring bit of guitar distortion over acoustic guitar and bass. Bardo then returns things into focus, her voice calming the chaos for a moment. Her voice is at its most powerful on the choruses, with a beautiful guitar chime accompaniment. The distortion never truly fades away, but shuffled in the background until the song’s final moments where her vocals become overtaken and distorted.

Bauhaus, L’Appartamento is due September 21st via Wichita Recordings. Pre-orders are available from these links and Bandcamp.

With their two critically-acclaimed LPs in 2019, there was no stopping Big Thief. They grabbed their rightful spot among the best indie bands out there. However, that level of productivity is not easy to maintain, and Big Thief have been mostly quiet since then. But last month, the band released a fantastic two-side “Little Things” and “Sparrow”, and it gave fans a taste of what may be on the horizon for the Brooklyn band.

Big Thief are return with “Certainty”.  Much like the more simplified production and approach of “Little Things” and “Sparrow”, “Certainty” was recorded during a power outage on a four-track tape machine running from a pickup truck. The song captures that vibe, feeling very much like a country song. Adrianne Lenker and Buck Meek harmonize in a great way over a bit of acoustic guitar, a fantastically understated, yet complex drum beat, and a perfect amount of bass. While it’s not the most pristinely-produced song in their catalog, everything that makes Big Thief such a special band is present and made even more prevalent here. There’s a heart and soul that so few bands have. It has us excited that a full length record is coming in the near future.

“Certainty” is out via  4AD and available on Bandcamp. 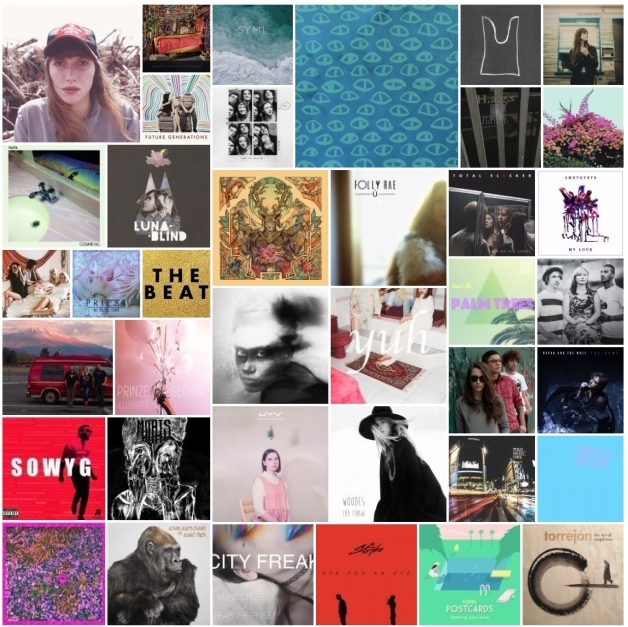