In Part 2 of daily feature, The Matinee ’22 v. 042 is like Metropolitan Museum, adorned with fabulous artworks from some of America’s and New Zealand’s finest artists. The mini-playlist include dedications to old masters of art and music.

The first half of the doubleheader, which is dedicated to European artists, is available at this link. These sixteen tracks are included on The Songs of March 2022 playlist, which can be found on SoundCloud and Spotify.

Last year, Cassandra Jenkins released one of our Favorite Albums of 2021, the remarkable An Overview on Phenomenal Nature. It was a record that captivated listeners with Jenkins’ engrossing storytelling and the warm musicianship that accompanied each track. Since then, she followed-up the record with a collection of demos and remixes from the record, breathing new life and new context into each of those songs.

Jenkins’ first release post the Overview records is the dreamy “Pygmalion”. Inspired by the Greek myth of the sculptor who falls in love with the statue that he made, Jenkins once again combines all of the ingredients that makes her such a compelling songwriter. Pulsing bass keep “Pygmalian” moving with some ambient synth sounds fleshing out the sound. Guitar comes in as well, but just enough to accent Jenkins’ voice. Speaking of which, her vocal is layered upon itself and it’s barely more than a whisper. Those vocal qualities make the single even more impactful and bring life to her story,

The single is released as part of Secretly Canadian‘s 25th Anniversary Celebration and its SC25 campaign, which aims to raise $250,000 for Bloomington, Indian organization New Hope For Families. Jenkins recorded the single at Abbey Road with members of Lylo as her backing band.

We’re kind of cheating on this one since Anton Newcombe, the mastermind behind The Brian Jonestown Massacre, lives in Berlin and has for nearly a couple of decades now. But in the spirit of balance (i.e., 8 songs in each The Matinee feature), we included him in this list since TBJM were originally formed in San Francisco. Enough with the public service announcement, and now let’s celebrate the return of one of the great psych-rock bands of the past thirty years. Yes, TBJM have been kicking around since 1990! One listen to “Real”, however, would give no indication that Newcombe turns 55 years old this year.

Instead, he sounds like he’s 22 again and rumbling across America in his vintage muscle car. The raw, grittiness of the SW deserts are heard in the gritty, searing guitars while the storms of the southeast are reflected in the thunderous rhythms. Newcombe’s voice, meanwhile, sounds rejuvenated, like a man who has finally reached the far shores after an unforgiving journey. A man who has discovered who he is, what he needs, and has found truth. Newcombe’s lyrics, too, indicate this, as he tells us to seek the truth instead of believing in the stories offered in voluminous books. He tells to take our own journey of discovery and, like himself, find inner peace.

The song is taken from The Brian Jonestown Massacre’s forthcoming new album, Fire Doesn’t Grow On Trees. It’s out June 24th on Newcombe’s own A Recordings.

Are you in the mood for a song that will make you holler and release all the tension from your body? A song that represents how you feel about the world, where you want to holler, “Screw it, I’m doing it my way!” If this is the case, then you’ve come to the right spot on The Matinee and a young artist who is starting to make waves within the LA music scene with her raw, gritty, and boisterous rock. Kelly Rosenthal is her real name, but she performs under the pseudonym, I Am Strikes. Last week, she released a ripper that will have you have tearing away the chains that bind you.

“Paper Tiger” rages like a young Band of Skulls with the attitude of a youthful Yeah Yeah Yeahs. Even in the “subdued” beginning, the song bleeds with intensity and urgency, which only escalate with every passing second. The bridge, in particular, features a terrific guitar solo, which is supported by a fantastic, pummeling rhythm section. While Rosenthal’s voice possesses a lushness, it also has an edge, and this adds to the power of her lyrics.

“Are you a spade in a deck of diamonds
In a cage of the kings and queens?
Will you stand up or watch your life end
While you’re down on your fucking knees?

The weight of the world
Falls heavy on the backs of the young and restless
We built an army for free
Won’t you come my way?”

To answer her question, we will not just come her way. We will follow her. Watch out for this exciting, young artist, who is signed with Thrashpop Records.

Nearly two decades ago, Azure Ray quietly transformed music with their ethereal dream-pop. Orenda Fink and Maria Taylor were the inspirations for a new generation of bands that included Beach House. Their music was heavenly, where synths were meant to support gauzy guitars and the trembling calmness of the rhythms. For those who are too young to remember or even to have heard of this great duo, another pair arrives to take us back to a time when dream-pop shimmered with ease, grace, and dazzling effect.

elison is the project of Marissa Kephart and Scott Yoshimura, who like Azure Ray reside in the US’s heartland. And yet, their music sounds like it belongs on the coast, and “Little Lies” is the perfect introduction to their dreamy environment.

Every note from the crystalline guitars, sparkling synths, and taut rhythms touches our skin like the most gentle sea breeze. They bring shivers down our back and make the hairs on the back of our neck stand up. Our chests, meanwhile, swell at the sound of the duo’s lush vocals, particularly Kephart‘s. They share a story of secrets, where we keep the truth at bay so as to not hurt the one we love or once loved. And to not hurt ourselves in the process.

Here’s a band to fall in love with now and again and again in the future.

Every time we hear a song from Annemarie Duff’s project, T. G. Shand, our minds immediately think back to our youth. Her dreamgaze approach is reminiscent of the ’90s and the days when My Bloody Valentine, Slowdive, Lush, Cocteau Twins, and others had us staring downwards while our minds floated to an unknown place. This effect was evident on Duff’s previous single, “Lemony”, and she once again has us mentally drifting to nowhere on “Little Sieve”.

Unlike her past singles, Duff adopts a more restrained and simplistic style, but the results are still the same. Light percussion and a lingering guitar progression open the tune. While there are not big explosive nor cinematic moments, the song is tranquil and soothing, creating a sense of calm and peace within us. And the song is, in its own way, striking. It is made for the start of spring in one hemisphere and the oncoming autumn in the other. The changing of the seasons is a perfect time to contemplate where we were and what awaits.

“If kicking the sieve would gather it up
We’d take it indoors, get a little for a lot
It’s fair the tease in front of it seems so spot on at least
Taking down sides kicking walls”

Duff’s music can be found on Bandcamp. Support this hidden gem from Aotearoa.

Isabel Whelan releases her music simply as Bel. Her debut EP, Muscle Memory, has so many of the best qualities of modern indie-folk music. There are times where it’s traditional folk, and at other times she’s digging in on some infectious synth-driven folktronica. Earlier this month, Bel shared “Big City”, the first single from her upcoming EP, Jet Lag and it put Bel’s ability to set a scene front and center.

Bel has followed that up with “PBR”. Singing of “Cigarettes and PBR at a gentrified dive bar” (PBR being of course Pabst Blue Ribbon beer),Bel’s lyricism once again transports listeners right into the song. It’s about wanting to escape social moments, whether it’s at a bar or at a crowded fast food joint. Bel is joined by girlhouse on the track, and the two vocal parts exchange parts and harmonize. The added vocals add so much to the track as it builds to a stunning conclusion.

Whelan’s new EP, Jet Lag, is expected later this spring. Here’s another star in the making.

Crystal Eyes are a band that draw influence from a fairly wide range of musical styles. Their 2017 debut, The Female Imagination, was a perfect example of that. Jumping from psych-folk to garage-rock to shoegaze, you never knew where Crystal Eyes were going to take listeners next.

“Like A Movie”, the quintet’s latest single, takes us on yet another journey between genres. Starting in almost a bubblegum-pop style with its bouncy drums and synth and inviting vocals. Then some distorted guitar roars in underneath, before long the song is completely transformed into a dreamy shoegaze number. “Like A Movie” builds into a huge ending with some huge reverbed vocals clashing with guitar bubbling underneath, the latter of which slowly overtakes the former. The song’s simpler early moments make the big finish feel even bigger.

Those familiar with Dear Boy know the quartet have a way with turning intimacy into an extravagant affair. Whether it is boisterous indie pop, hip-shaking pop-rock, or, as they demonstrate on “Wet Clothes”, shimmering synth-pop that makes the retro sound cool and fresh again.

Or more accurately, LA-based band’s newest single sounds like it came from the soundtrack of an ’80s coming-of-age film. With the sparkling synths and the familiar shakes of the percussion and the lingering guitar, we can imagine the climatic moments when different characters finally connect. We can see it coming from a mile away, yet we still smile at the (re)union. We can hear this song sitting near the end of of St. Elmo’s Fire, The Breakfast Club, Say Anything, Opportunity Knocks, and Dirty Dancing where the plot is about to peak. Ben Grey’s falsetto sounds like it came from that time, and we immerse ourselves in his voice and story of youthful innocence and bliss. And of loss and regret. 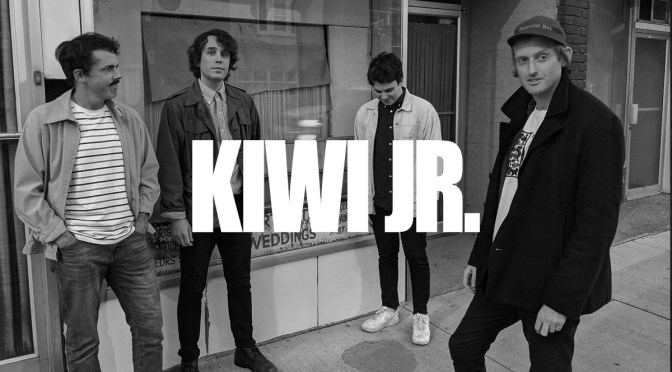 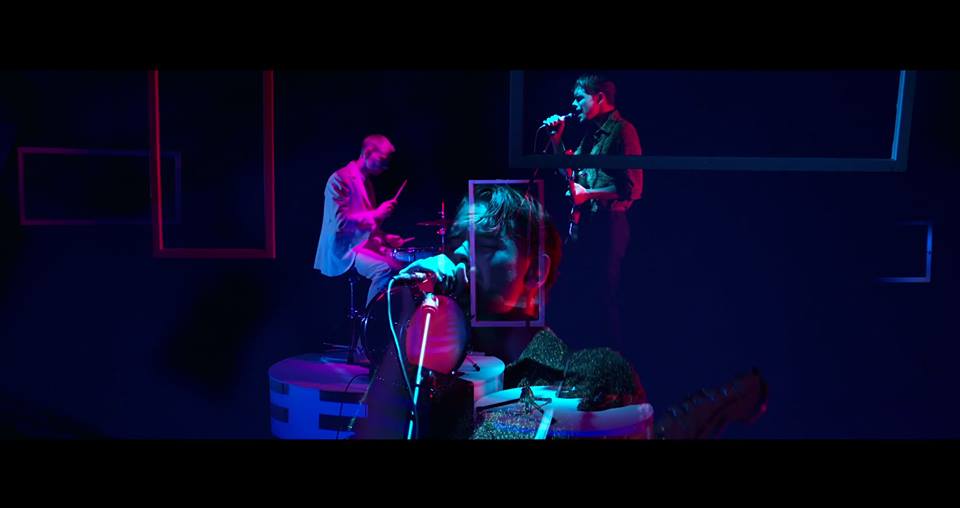