This year’s Hopscotch festival kicks off on Thursday in Raleigh, North Carolina, and it brings one of the year’s best lineups to the table.  There are tons of great artists and bands from around the country, representing the Brooklyn DIY scene, Philly punk scene, and even a headlining show from Solange Knowles. While the big headlining shows by Solange, Big Boi, Run The Jewels, Angel Olsen, and Future Island should definitely be on your radar, here are some great, smaller shows in some of the smaller venues. You can also check out the full schedule here.

Follow the Festival on social media as well for updates, particularly as it relates to the weather. Remember, Hurricane Irma is growing in the Atlantic Ocean. While it’s path is uncertain, be prepared and stay alert.

Holy cow, Thursday is absolutely jam packed with some of the best shows of the entire festival. You can’t go wrong with the City Hall show of Margo Price and Big Thief, but there are tons of other great options as well, including the Basement show of The Brian Jonestown Massacre and Oh Sees/OCS (fka The Oh Sees). Mount Eerie, who released A Crow Looked At Me, one of the year’s most devastating albums, will be closing Fletcher at 10:30 pm.

After that, you might be able to run over to Slim’s or Neptune’s. Cayetana are playing Slim’s at midnight and will without a doubt be one of the best sets of the festival. At the nearby Neptune’s, Brooklyn’s Gobbinjr will be playing at the same time, and they’re always a fun show. They have a new lineup, however, featuring the usual crew of Emma Witmer on vocals and keys and Hayley Livingston on guitar plus new additions of Dan Francia on bass and Casey Weissbuch (Mitski) on drums. Oh, there are also METZ at Cam and Sunflower Bean at Pour House. It’s guaranteed if you’re at Hopscotch, you’re going to see some great music on Thursday.

On another tough day to navigate, the best bet here might be to chill at Neptune’s. Hometown band Aunt Sis opens the bill and run the risk of becoming your new favorite band (seriously check out this track!). Also on the bill are the Brooklyn based Ó (fka Eskimeaux) and Bellows, who released the wonderful Fist & Palm last year. Ó, meanwhile, are working on a new record, so both will be great shows. Baltimore’s Snail Mail will perform in-between the Brooklynites and share tracks from what was my favorite release of last year, their short and so so so so sweet, Habit EP.

Of course there are other shows to consider. Afghan Whigs and Preoccupations are rocking Lincoln. Lee Fields and Har Mar Superstar will play the Basement with Kaytranada. Plus two big stage shows with Run The Jewels and Future Islands. Wow, yeah, I did say they have the best lineup of the year, didn’t I?

Good luck finding a better 1-2 combo than Hurray for the Riff Raff and Loamlands. Hurray for the Riff Raff are incredible live, and their latest record, The Navigator, is one of the year’s most important. Local heroes Loamlands are a band I’ve managed to catch a few times, and they put everything into their live performance. Dear Nora, who likely influenced a good amount of artists on the Hopscotch lineup, also plays this show. Add in Advanced Base and Naked Naps and this is one of the most stacked shows of the weekend, even up against some really stiff competition.

Competition that includes another great 1-2 combo of Japanese Breakfast and Cende, another of EZTV and Beverly, or shows that include Cherry Glazerr, Mannequin Pussy, Kevin Morby, PEAER, Hand Habits, and Aldous Harding. In other words, make Lincoln your home base and see what else you can get to as well.

Well, there’s only one show on Sunday and damn, is it a big one. Cloud Nothings, Mary Timony plays Helium, Mount Moriah, Cass McCombs, and Angel Olsen. If that alone doesn’t sell you on this, you’re probably on the wrong blog. It’s an all-day event with doors opening at 12:30, and Olsen goes on at 8. Like, holy crap, look at that lineup. Plus the throwback sounds of Jenny Besetzt, which any War on Drugs fan should appreciate, and local band No One Mind open the show.

As you can tell, this year’s Hopscotch is stacked (which I’ve mentioned a few times). On top of that, there are tons of great things happening during the day at the official Hopscotch Day Parties as well. If you’re in the area and haven’t grabbed your Hopscotch wristband yet, you can score tickets here. 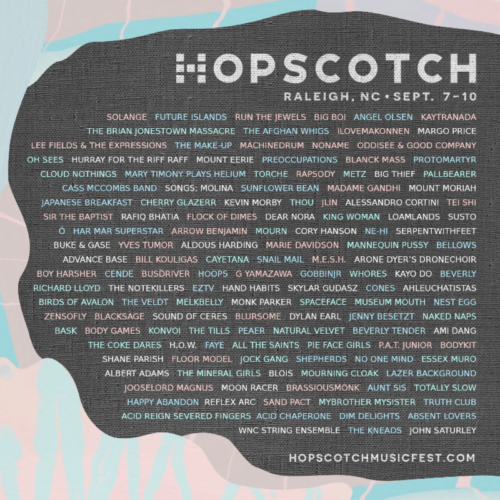