Moments of surrender are what the best songs provide, and the nine songs featured on The Matinee ’22 v. 158 elicit such feelings but in different ways. Some dazzle, others are suffocating in their effect, while many momentarily cause catharsis. Such experiences are plentiful on The Songs of November & December playlist, which includes all the tracks below. Find the playlist on Spotify or SoundCloud.

Just when you think Young Fathers have done it all, they release “Tell Somebody”, which is a departure from their trademark, musical mosaic that was most recently heard on the powerful “Geronimo” and the jubilant intensity of “I Saw”. While the third single from the trio’s forthcoming new album, Heavy Heavy, heads in a much different direction, it reveals how Alloysious Massaquoi, Kayus Bankole, and Graham Hastings continue to challenge themselves in doing the unexpected.

“Tell Somebody” is an extraordinary post-rock opus that combines the otherworldly atmospherics of Mogwai with the cosmic explosions of I Break Horses. The song is simply heavenly, where for 190 seconds we tightly grasp the arms of our chairs and hold on as the band lift us to beyond the clouds. While the whole experience is one of pure escapism, the trio’s message is, as always, poignant, as they seek to console everyone who is struggling to see the sun, the stars, and the dawn of a new day. Bankole’s words are simple but poignant.

“You scream,
But your soul, your soul ain’t sound
You scream
‘Cause you know it’s a long way down
You reach
But your feet never left the ground”

Before her current project existed, Sabrina Teitelbaum performed as Baum, under which she released emotionally-charged alt-pop songs, like “Effortless”. If Teitelbaum would have maintained this approach, the New York City-born artist very well could have emerged as a modern-day Stevie Nicks. However, Baum was set aside a couple of years, and Teitelbaum redirected her focus. Thus, Blondshell was born.

Introduced to the world in June of this year when “Olympus” was released and followed by “Kiss City” and “Sepsis”, Blondshell was equal parts Liz Phair, Phoebe Bridgers, and Julia Jacklin, where she could awe with a lush melody but then ignite into full-throttle grunge.  Her lyrics, too, are at times brutally honest (they are particularly biting on “Sepsis”). This new side to Teitelbaum has clearly impressed because yesterday she officially announced that she’s signed with Partisan Records. Her first single with the influential label is, well, a full-on rocker.

There’s no lush melody at the start of this awesome, punchy number. Instead, a reverb-drenched guitar putters beneath Teitelbaum’s layered vocal. She reflects back on 2004 when one of her favorite TV series first aired, “Veronica Mars”, and how it was her escape for the next four years. She then offers us our own escape when the track turns into an absolute belter with the LA-based artist channeling her inner Donna Grantis and rips her guitar to shreds. The moment is awesome.

We don’t often write about cover songs, but this one is absolutely spectacular. As part of Secretly Canadian‘s very special SC25 anniversary series – from which proceeds are donated to New Hope 4 Families, a local non-profit and gender-inclusive housing solutions in Bloomington, Indiana – Vancouver’s Lightning Dust team up with local rocker BISON to release an incredible rendition of Songs: Ohia‘s “Lioness”.

While Jason Molina’s original was emotionally draining due to its raw, stripped-back intimacy, Amber Webber (of Black Mountain and Pink Mountaintops), Joshua Welles, and BISON give the track a beautifully haunting quality. The addition of the tapping cymbal and a second guitar that occasionally sparks turns the dreariness of the original into a dark, bone-chilling number. Webber’s restrained yet lush voice also accentuates Molina’s tale of directly facing one’s greatest fear without blinking an eye.

If it wasn’t for the work of boutique labels like Royal Oakie Records, songwriters like Michael James Tapscott would go largely unnoticed. So instead of performing at cafés to his usual audience of familiar faces, Tapscott has the opportunity to play in front of an appreciative crowd of strangers. With the songwriting chops of Kevin Morby and the voice of Neil Young in his youth, the Bay-area artist is one to not just watch but to listen intently. So, point your ears in the direction of “Luxembourg Gardens” and discover an American hidden gem.

This solemn, gentle folk-rocker is reminiscent of the music that emerged in the late-’60s and early-’70s. At first, it feels blissful and even levitating in its effect, yet below the surface emerges a quiet desperation. For Tapscott, he reflects on his own well-being while spending another restless night in Paris, where the City of Lights offers no escape from the demons that lie beneath.

Sometimes you lose
and step right into
another harlequin nightmare”

Tapscott’s new EP, Michael, the Worst, is out now on Royal Oakie Records. Get it on Bandcamp.

The global pandemic that wiped out nearly two years of events and activities also took its toll on bands. Some groups completely disbanded or saw members move on to tackle new projects. The life that we once knew no longer existed, and we continue to adjust. Danish new wave / indietronic / electro-rock outfit Lust For Youth were not immune to the post-pandemic blues with the trio becoming a duo. Despite the new formation, Hannes Norrvide and Malthe Fischer have embraced the change and released their first single since their 2019 self-titled album.

With “Accidental Win”, the duo display why Sacred Bones Records signed them more than a half-decade ago. The track is a brilliant mélange of ’70s coldwave, New Order-esque new wave, and a dash of Joy Division-esque darkwave (the guitar line in particular beams with a Brendan Sumner-like steely intensity). It is blustery, euphoric, and cathartic, yet the band recite how one person constantly questions his existence and purpose after surviving an accident.

“You’ve been questioning
Just what you descended from
So your lineage is gone
What gave it away?
Suppose you succeed
I’ll undeniably be an accidental win”

Expect an album or at least an EP announcement early in the new year – or we’re hoping there will be one.

Fresh off releasing a soaring LP in World Below, Scottish post-punk / alt-rock thunderbolts Baby Strange evidently have much more to say. While most bands would focus on promoting their latest material, Johnny Madden, Connaire McCann, and Aidan McCann think the best way to stay relevant is to release new material whenever they can. So before we bid adieu to 2022, the band offer not one but two more songs of varying intensity. (Disclaimer: these songs were originally released for Record Store Day in 2021 but are now available for streaming everywhere. As such, they’re fresh for most music fans.)

On “In the Flesh”, the quartet delve into cavernous dungeons where blistering and uneasy post-punk resides. As the rhythms loudly pulse, a searing guitar dances over top, providing the companion to Madden’s sinister voice. He sings about how lives revolve around social media, and the idea of physical interaction is loss on the masses. “Is your lighting right, will you swipe tonight? Never in The Flesh,” he sings with a sinister refrain.

A similar tale is told on “Pathetic Fuck”, although the scene is set to a rambunctious, western-tinged art-punk approach. The band have essentially brought their punk origins to the Wild West, where, instead of six shooters blazing, guitars and drums are firing in all directions. This track, however, is a cover of fellow label mate Nicky William‘s song, which recounts how the solution to finding normalcy often is over-medicating people. It’s a clever and relevant tune, especially in these bizarre times.

In October, Stella Rose released her first single, the intense “Muddled Man”. The song’s electronic and industrial sound should make it no surprise to learn she’s the daughter of Depeche Mode front-man Dave Gahan. There’s a type of creativity pulsing through that track that echoes her father’s art, but Rose adds some haunting folk touches to it, especially in the track’s latter half. It’s a dynamic that brings two very separate worlds together in a way that’s both unrelenting and spellbinding.

Rose’s second single comes in the form of “Angel”. The younger Gahan’s newest number has a lot more folk influence than the darkness that shrouded “Muddled Man”. Some gorgeous ambient sounds kick off the track before a fantastic complex beat kicks in. Then comes in a soothing layer of bass and some slide guitar. Rose’s voice booms from the moment it hits the ear, a powerful force that cannot be denied. Halfway through, “Angel” reaches some heavenly heights with long, sustained guitar chords, some dreamy background vocals, and a perfect layer of reverb.  There’s even a fantastic, short guitar solo to tie things up before Rose brings “Angel” to a close. Where her first single thrived in the darkness, “Angel” brings so much light.

The single is out on Kro Records.

Last year, Allie Crow Buckley released her debut EP, Moonlit and Devious. Powerful and dynamic, the record felt completely cohesive even with its wide range of styles and influences. It’s something that’s rung true on the singles she’s released since then: the bouncy and electronic “Utopian Fantasy” and the atmospheric “Angel”. Buckley cites Black Sabbath and Joni Mitchell as influences, and on her latest single, “Naked at the Feast”, Buckley takes influence from Greek mythology and a fixation of the God Dionysus.

On its surface, “Naked at the Feast” is a beautiful track. Big, bass synth, jingling reverbed pianos, and electronic percussion provide a perfect underlayer for Buckley’s striking voice. The beauty of the song is in contrast of the song’s depiction of Dionysus waiting to be eaten alive by his followers at his own feast. Sometimes, people turn to mythology to help understand and cope with what is happening in the world, and Buckley turned to the Greek God of wine and chaos to grapple with today’s complexities. Despite the chaos, “Naked at the Feast” stays grounded, lifting off briefly, kicked off by Buckley’s voice stirring up a whirlwind, accompanied by some guitar and some big piano chords, before it all glides back down.

The single is out on Nettwerk Music Group. 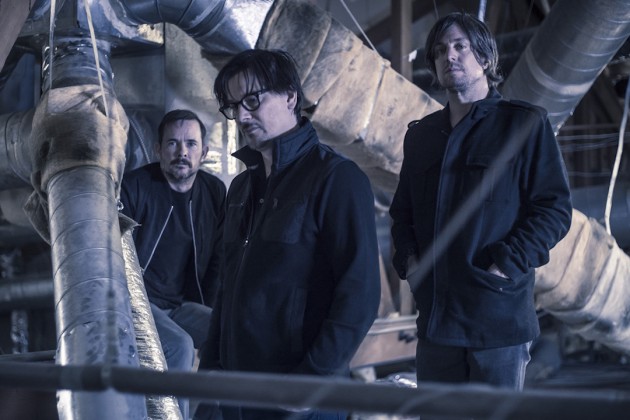 Let it fall, let it go: Into Failure’s dark heart